It’s always a good idea to go on rerolling and pull the top-tier character for a strong start. Since SSR characters are hard to get; you might want to pull them in the early game with the reroll method. You can check the Goddess of Genesis S Tier List here if you don’t know what are some awesome characters to reroll. Now, let’s take a look at this Goddess of Genesis S reroll guide.

The reroll guide is divided into two steps.

In the rerolling process, you will be using multiple Gmail/Google accounts or any other social media accounts. After the x10 draw(read the steps below), you can logout from the current signed-in account(tap the player avatar in the top-left corner -> account -> switch – this will log you out from the game) and log in with another; in case the summoned heroes are not of high-tier. If you log in as a guest, you will have to delete the app data and download the game again; it’s around a 1GB patch. So, better use the second Gmail or social media account while rerolling. If you are on iOS, try using the Android Emulator on PC or delete/reinstall the game for rerolling. 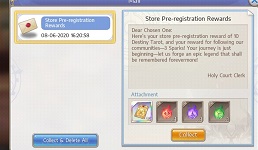 Keep following the tutorial – it will end after the 1-1 stage. At level 5, it unlocks the summon function and you get one free SR hero; Cupid(most of the time). And, after completing the 1-1 stage, you should be at level 6. This is the time where you will draw x10 characters from the summoning portal. First, check the mailbox and collect the x10 gold gacha tickets; Destiny Tarot. Go to the summon menu -> choose a banner featuring your favorite top-tier hero. (the free banner name is Summon Heroes. Others are paid and require genesis tarot cards. So go for Summon Heroes) You can check the tier list here. We recommend these heroes for rerolling; Dracula + Valkyrie or Valkyrie + Isabella. These are the best heroes to reroll for in the Goddess of Genesis S game.