In this Tennis Clash guide, you will learn all the basic aspects of the game such as how to serve, about controls, hit hard, volley, etc.

This is a beginner-friendly Tennis Clash guide for those who have just started playing the game. And, it covers all the things that you need to know. You can comment below if something is missing or you need help. So let’s not waste any time and head to the main content: – Tennis Clash Guide.

How To Serve In Tennis Clash? 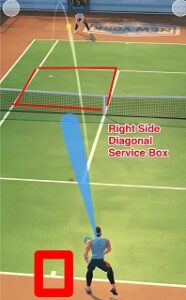 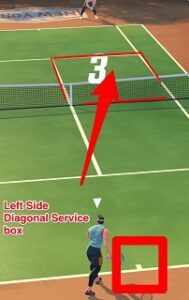 First, check the character’s position; if the character is on his left side of the court, then you will have to land the ball into the diagonal service box, which would be the right side of his court – cross net. If it gets done correctly, the play continues. Check the picture above to know what is service box.

What is Volley in Tennis Clash?

To perform a volley in Tennis Clash, you will have to hit the ball before it bounces on the tennis court. In other words, you hit the ball when it’s in the air – don’t let it bounce – hit before the bounce. You can easily hit a Volley on lob shots. It depends on the opponent’s strike.

What are the Strings in the game?

Strings are like power-up items or you can say consumable items, which buffs a specific attribute of the character for temporary. The player can spend gems on the Strings before the match starts. You can check the list of Strings and the buff they grant here.

Shots Styles – Volley; hit the ball before it bounces, Straight; low-medium-high range shots – the range of a shot depends on how you swipe the finger. Lob – Lob Shots can be performed by slightly swiping the fighter and then holding it in place – and, then release the finger. Lob Shots are high in height. The blue bar on the left side of the character determines the height of the shot. The lower the blue bar is, the higher the height of the shot.

How To Hit Hard?

How To Win? How To Be Good At Tennis Clash?

To win the matches in Tennis Clash, you need to score more points than the opponent. And, the number of points that you need to win the matches depend on the tour level. For example – In Tour 1, you need 5 points. If both the players achieve this target, then there will be a tie. And, if there is a tie, then the player who outscores the player with 2 points wins the match. The game displays the game progress messages on your screen; match point, deuce, etc.

How To Get Free Coins⇓

12 thoughts on “Tennis Clash Guide – Serve, Controls, How To Win, And More”