This is a beginner-friendly The King of Fighters ALLSTAR guide for the players who have just started playing the game. KOF ALLSTAR guide, tips, cheats & strategies

The King of Fighters ALLSTAR is the latest mobile game by Netmarble, available for free on App Store and Google Play Store. This King of Fighters ALLSTAR guide covers all the basics aspects of the game that you need to know – also, it covers all the KOF ALLSTAR tips, cheats & strategies that you can use to get victories in high-difficulty stages. So let’s not waste any time and head to the main content.

The King of Fighters ALLSTAR Guide⇓ 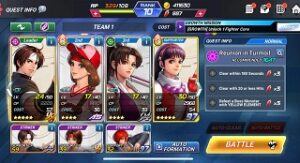 In KOF ALLSTAR, you build the team of three fighters; one leader(in the first slot of the team formation) and two other fighters that you can tag along in the team. During the fight, you can switch to any of these fighters – there is a cooldown though – during cooldown, you would not be able to switch to the fighter.

Along with these three fighters, you can pair strikers(fighters). In other words, you can pair the three main fighters with three strikers. On the quest info or team-formation screen, at the bottom of the main fighter’s portrait, you can add strikers by tapping the + option. If there is already a striker, then you can replace him/her by tapping on his/her portrait -> on the next screen -> select the striker that you want to select. (Also, see – KOF AllStar Coupon Codes – The King of Fighters All Star)

The King of Fighters ALLSTAR Guide To Combat

At the top-left corner of the game screen, you can switch between these fight modes. We would recommend playing manually when fighting powerful enemies. When grinding, you should use the auto-mode.

⇒At the bottom-center of the combat screen, you can check the fighter’s HP and power-gauge. PG or Power Gauge is required to cast the ultimate move. You can charge the PG or Power Gauge by unleashing basic attacks/moves.

So this would be all in this KOF ALLSTAR Guide to combat. Now, let’s learn how do you progress in The King of Fighters ALLSTAR.

We all the players start the game from the story mode in which we complete the chapters with increasing difficulty. The story mode is divided into five series of events: –

In each series, there are some chapters that you need to clear to unlock the next series. And, in each chapter, you compete with powerful fighters. The number of stages in a particular series is mentioned above.

In the story mode screen, at the top-left corner, tap the series button -> from there you can switch between the series. And near the series button, tap the drop-down button that lets you choose the difficulty mode; normal, hard, and expert.

Other than the story mode, you can participate in dungeons, quests, events for rewards.

The King of Fighters ALLSTAR Guide To Fighters

How To Get Fighters In KOF ALLSTAR?

On the left side of the screen, you will see lots of banners featuring specific fighters. For example – Fighter Summon, Step-Up Summon, Friendship Summon, Summon Ticket. Select any banner and on the upper-right side, tap the chances info button -> there you can see the list of Fighters featured in that banner. Also, it shows the drop rate. For more information on summoning, you should check our The King of Fighters ALLSTAR Reroll guide.

How To Make The Fighters Stronger?

Head to the lobby -> at the bottom-left corner, tap the Fighters button to enter the Fighter menu. There you will see all the Fighters that you have obtained so far in KOF ALLSTAR. Tap on any Fighter to open his/her profile. From the profile menu, you can access all the functions that help you power up the fighters.

Fighters can perform much better if they have better stats such as HP, ATK, DEF. And, the easiest way to raise a character’s stats in KOF ALL STAR game is by leveling up. For leveling up, you need capsules. Capsules grant EXP to the fighter. You can grind these capsules in the story mode – repeat the stages. The process – head to the fighter’s profile -> level up -> use the capsules -> enhance.

KOF ALL STAR Guide To Evolving

Evolving is not as easy as leveling up. You will need to grind the evolution materials such as Jade, mirror, sword, etc. Where to get these materials? From the Power-Up dungeon.

Head to the evolve tab in fighter’s profile -> there you can check the number of materials required to evolve. Tap the material to check its source.

The King of Fighters All Star Guide To Limit Break

⇒What is limit break in KOF ALL STAR?

Breaking the limit – Fighters in the game have a default max level, based on the grade. With the limit break function, you can increase the fighter’s max level. Let’s have a look at this table: –

⇒How do you limit break character?

You need specific materials to limit break a character. In the limit-break tab of the fighter’s profile, tap the material items called Soul -> check the source -> tap the source. You can obtain the Souls from Soul Quest Mode or from the Secret Shop(Shop -> Secret Shop).

KOF ALL STAR Guide To Cores

Additional stats such as HP, ATK, DEF, CRIT RATE, etc. can be granted to the fighter by unlocking cores. Head to the core tab in the fighter’s profile -> there you tap the stat nodes -> unlock. Specific cores are required to unlock these bonus stat effects. And, you can grind cores from Power-Up Dungeon or Craft in the craft page.

The King of Fighters ALL STAR Battle Cards

At certain affinity levels, you get rubies or buffs like an increase in HP, DEF, etc. Affinity level can be increased by sending the gift to the fighter. Navigate to the affinity tab in fighter’s profile -> select the gift -> choose the quantity -> OK. You can get the gifts from story mode chapters.

In KOF ALSTAR, the Fighters are of three types: –

Red>Green, Green>Yellow, Yellow>Purple, Purple>Blue, Blue>Red. Specific elements are strong against specific element as shown above. For example – the Red element is string against the green element. If the enemy’s element is green, he will receive more damage from the Fighter.

In the Fighter profile, you can check the fighter’s type and element color at the bottom-left side(tap the type icon).

We will explain everything in detail in upcoming guides(will be posted soon).

How To Raise Rank?

At the top-center of the home screen, you can check the current rank level. Raising the rank unlocks new functions, for example – Equip. Tap the rank bar to check the amount of EXP that you need to reach the next rank. You can obtain EXP from story-mode battles.