The King of Fighters ALLSTAR mobile version has just been released on Android and iOS by Netmarble, the publisher behind top-class mobile games such as BTS World, Fishing Strike, Knights Chronicle, and many more. The game features amazing fighters/characters(over 120) that you control in stunning fights. If you want to start strong, then you should roll for one of the best Fighters Orochi Iori. Let’s learn everything in detail: – The King of Fighters ALLSTAR Reroll Guide for beginners.

First, use the selective summon ticket. The game gives you one selective ticket for free that you can use to summon a specific fighter. After you complete the tutorial or when you are on the home screen of the game, tap the summon button at the bottom-center of the game screen.

In the summon menu, at the bottom-left corner, tap summon ticket option -> there you can use the ticket called Fighter Selector. It is a special ticket used to select a Fighter from the list. In that list, there are a couple of powerful fighters that you can pick: –

Shermie is a defense-type Fighter with purple element color. Leader Skill – Increases ATK by 60% when the HP is 70% or above.

You can check the complete list of Fighters in the Fighter Index(tap the menu button at the upper-right corner – near the home icon) -> Codex – Fighter Index. And, if you don’t know about the elements or colors or Fighter Types, please read our guide here ->

Now the first step is completed. Now, let’s continue to the second step in The King of Fighters ALLSTAR reroll guide. 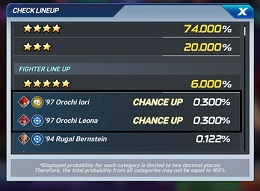 As of now, the best fighter in the game is Orochi Iori.

There are 0.300% chances of getting this fighter from the fighter summon. However, Orochi Iori only appears in the Fighter Line Up once you clear the chapter 8 in the story mode(The King of Fighters 94 Series).

In short words, progress through the story mode right after you use the selective ticket. Finish chapter 8 and Orochi Iori will get unlocked.

Now, after completing the chapter 8 in the story mode, head to the Summon menu -> fighter menu -> 10x summon for 900 rubies.

If you get lucky, you will get Orochi Iori. If not, then reroll(steps are mentioned below).

Note – don’t go for the second attempt if the banner is not available. For instance, you spent the 900 rubies after completing chapter 8(unlocks Orochi Iori). And, suppose, you don’t get this Fighter. Now, before you spend another 900 rubies, make sure to check the probability rate. You may not get Orochi Iori in the second attempt because the game can pull it from the banner. Here’s how to check: –

Go to the summon menu -> KOF Fighter Summon -> tap the green color button(chance info) -> a check lineup pop-up window will open where you can see all the Fighters that can be summoned from the selected banner upon spending rubies. You can also check the drop rate. Make sure that Orochi Iori is there.

If you don’t get Orochi Iori, it’s time to follow the reroll steps. (Also, see – KOF AllStar Coupon Codes – The King of Fighters All Star)

If you are on iOS, then there are a couple of ways to reroll(not so easy): –

Still, you will have to download the patch again.

Is It Worth Rerolling?

No. The rerolling process is quite lengthy and there are only 0.3% chances of getting the best fighter. Waste of time if you play for fun.

At the present time, there is an event called KOF Fest is going on. The banner features a time-limited Omega unit called Omega Rugal ’98. Let’s take a look at this fighter unit: –

So this would be all in this The King of Fighters ALLSTAR Reroll Guide for beginners.

4 thoughts on “The King of Fighters ALLSTAR Reroll Guide – The Best Fighter To Roll For!”