We have curated a list of games like Raid Shadow Legends. If you have enjoyed playing this game and looking for similar ones, then this article is for you. 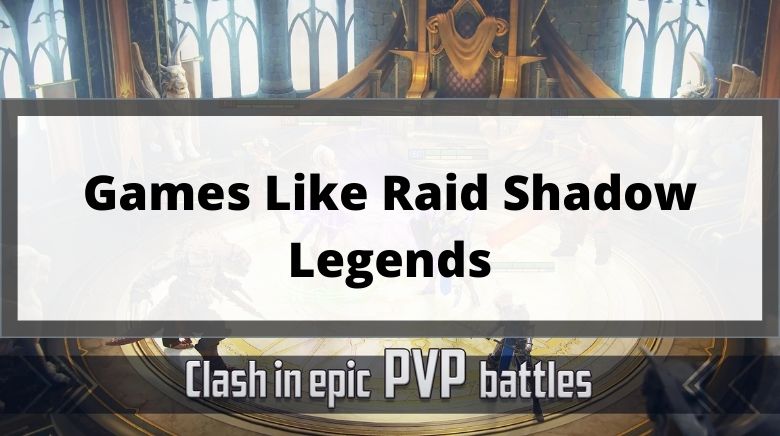 Published by Plarium Global Ltd on Google Play Store and iOS App Store, Raid Shadow Legends is a popular mobile game where players build a team of in-game characters aka heroes to fight enemies in a variety of PvP, PvE, guild, and event game modes. The game features a great collection of characters, classified into multiple roles such as tank, DMG Dealers, support, healers, and factions. During the battle, you will see the characters added by you in the team unleashing powerful skills to strike the enemies and win rewards for you.

To make the characters stronger, players can level them up, equip artifacts, activate masteries, etc. Speaking of game modes, Raid Shadow Legends offers PvP, PvE, Clan Boss, etc. game modes. Most of the game modes are not playable in the beginning; as you progress through the PvE campaign mode and increase the account level, new game modes will be accessible.

In this post, we are going to showcase a list of apps or games like Raid Shadow Legends. If you have got any recommendations, please share them in the comments below. So let’s not waste any time and get to the main content.

Magnum Quest, globally released in 2021, is one of the best games like Raid Shadow Legends. Just like Raid Shadow Legends, players in Magnum Quest build a team of champions/characters/heroes to fight the enemies. Each character in the game has got unique skills and strengths. You will be building a balanced team with a mixed setup of DMG Dealers, TANK, Support, Healer, to fight the enemy team. It offers idle battles and the AFK system; you can collect AFK rewards for the time you have been away from the game.

Summoners War is a popular mobile RPG available to play for free on Android & iOS platforms. It is another one of the best games like Raid Shadow Legends, offering gacha mechanics, a great collection of heroes to collect, develop, and use to win the battles. Players make the team with their favorite heroes, considering the stage requirement, and fight the enemies.

Just like Raid Shadow Legends, Summoners War offers PvE, PvP, guild modes where you can send your team to fight the enemies for rewards such as upgrade material, EXP items, growth items, recruitment stuff, etc. If you are looking for games like Raid Shadow Legends that play in landscape mode and feature a large collection of heroes, Summoners War is the game to try out;

Exos Heroes is another one of the best games like Raid Shadow Legends where you are tasked to build the best team possible to knock down the enemy team. There is a good collection of heroes to collect in Exos Heroes. You can power them up through leveling, ascension, promotion, equipment, artifacts, etc. The graphics are great, the gameplay has a lot to offer; PvE map exploration, PvP, guild, events, quests, dailies, and more.

So this would be all in this post on Games Like Raid Shadow Legends. If you have more suggestions, please share them in the comments below.