Read on for the Primitive Era guide: tips, cheats & strategies for beginners.

Published by Garena International III, Primitive Era is a mobile MMORTS game that sets in Paleolithic period. Players all across the world will build and embellish their villages on a vast world map. They will engage in fierce battles. As village chief, you will be responsible for its growth, defense, army strength, etc. It has PvE, PvP, Team, and Alliance battle modes.

This Primitive Era guide will cover the basics, tips, cheats, and strategies for beginners. So let’s not waste any time and head to the main content:

You can check the piece shield by tapping the chief’s hall -> village buffs. 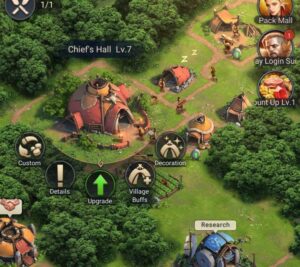 It’s your job to build a solid army to protect the village from invaders. Get stronger by training troops, getting and upgrading heroes, researching, setting up the garrison, and increasing storage capacity, beasts, and statues. Let’s learn everything in detail.

The ruby is an in-game currency in the Primitive Era that you can use to buy buffs, peace shields, VIP points, instant upgrades or construction, top shop in-game items, etc. If you are a f2p player, you must invest it wisely. We recommend investing the rubies to buy the VIP points and upgrade to a few VIP levels. VIP Level provides permanent buffs.

In the upper-left corner, tap the VIP option. There you can claim the daily VIP rewards; the reward amount varies based on the VIP level. Also, you can see the exclusive VIP buffs. At the top of the screen is a VIP bar showcasing how many VIP points you need to reach the next VIP level. You can get VIP points by logging in daily; claim the daily login VIP point reward by heading to the VIP screen and tapping the login icon in the top-right.

Another way to get VIP points in the Primitive Era is by spending rubies. At the VIP screen, tap the (+) icon button next to the VIP level bar. There you buy VIP points with rubies.

You will need thousands of rubies at later VIP levels, so you can just skip those if you are f2p. First few VIP levels are easy to reach, so just reach there and be done with it. Since you will not be spending gems at a higher VIP level, save rubies for premium items that you will need in the late game.

Villagers affect gold production and some construction. You must ensure that they are getting abundant supplies of food and water. Tap the bonfire plaza and transport the supplies. Build or upgrade the living tent facility to increase the villager cap. Above the VIP option, you can see the number of villagers currently aboding in the village in the top-left corner.

In your village, you can produce numerous resources. Each resource type has a production building and a storage building.

Sun’s Blessing: Place it around the buildings to give them a stat bonus

Laborer Huts: Laborers are responsible for constructing facilities and upgrades. Build laborer huts to get more laborers. The more laborers you have, the more buildings you can construct and upgrade at the same time

Home of Heroes: Commission heroes for development; heroes have skills that are activated when commissioned. After unlocking this building, you can assign heroes in facilities such as farm, gold mine, logging shed, etc.

Braveheart Guild: Give the hero bracelets to gain some ritual dew; ritual dew is needed to unlock hero skills

In the Primitive Era, the three customs are Farmer, Plunderer, and Trader. Each custom has its advantages and disadvantages;

If you are into PvP combat, Plunderer is the best custom for you in the Primitive Era. If you are not into PvP but in growing the village quickly, Farmer custom is the best. Please do note that this is a PvP FOCUSED game.

You can change the custom after three days from the date of selection.

Recruit heroes from Heroes Lodge. Some heroes excel at fighting, while some are good at gathering or increasing production. Tap the hero icon at the bottom of the screen to open the hero screen. It has four tabs at the top; in the battle tab, you will find the heroes with combat skills. You will be deploying these heroes to the battle to fight enemies. Make sure to read their skills and use them according to their strengths.

In the growth tab, you will find the heroes you can assign to other buildings for a bonus effect, like increasing training speed, production, building speed, etc.

Here you can assign warriors, heroes, and beasts. Warriors are the troops, such as archers, infantry, and cavalry, that you train in the archery range, infantry barracks, and cavalry camp, respectively. Upgrade the hero to assign more warriors in the march queue. The more warriors are in the march queue, the more load you get; this amount determines the amount of resources you can collect from a resource site or enemy’s village.

In the early game, progress through the chapter quests. Keep training the troops; upgrade the troop training centers and unlock high-tier troops. Upgrade heroes. Send your heroes and the warrior/beast army to battle PvE enemies such as Dire Wolf, Carved Tooth, Giant Warthog, Gold Thief, and Barbarians to earn hero EXP and resources.

Eliminate barbarians on the map to earn rubies, speed-ups, and recruitment items. You must join an active clan and get the assistance of clan members to launch a rally on the barbarians. Head to the world map by tapping the globe icon in the lower-right corner. Use this search icon in the lower-left -> select barbarians.

Join an active clan. Assist others as well.

So that’s all we got in this post on Primitive Era guide: tips, cheats & strategies for beginners.