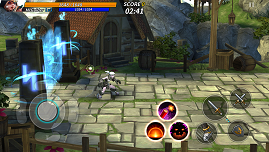 nWay Inc., the creators of power rangers game has just released a new side-scrolling RPG for Android “ChronoBlade”. Here’s all you need to know about this arcade-style combat game; ChronoBlade guide, tips, cheats & strategy, and overview

ChronoBlade by nWay is a new side-scrolling role-playing game for Android in which you fight against many monsters, defeat bosses with the help of your heroes. The game features plenty of game modes, action-packed gameplay, a variety of adventures zones, boss fights, and much more. Let’s take a look at all the things of the ChronoBlade game. 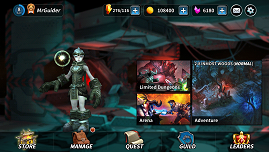 The game starts with a tutorial in which the player guided about the basic functionality of the game, learn about various things; skills, controls, zones, leveling-up, and much more. Once the tutorial ends, you play and manage everything manually. Like other side-scrolling games, in ChronoBlade too, you defeat the hordes of enemies, and at the last of the stage, you fight against the boss. It would not be easy for the player to get three-star in every level, but if you use below mentioned tips, cheats & strategies, it would be easy.

ChronoBlade features three game modes; adventure mode, dungeon mode, and arena mode. In Adventure mode, you complete stages, defeat bosses, and level-up your profile. Adventure mode is the key to unlock rest game modes. You can play dungeon mode and arena mode once you reach level 8. Dungeon mode is like the boss fight, but it’s too hard if you have not unlocked new weapons or if you have not yet level-up weapons. In Arena mode of ChronoBlade, you fight against other players from all over the world, its PVP. 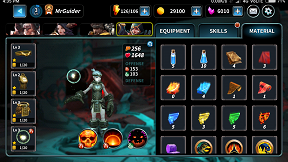 ChronoBlade features four heroes, each hero has over 30 punishing ground and air attacks to chain together for insane combos. All of the heroes are unlocked, you can start the game with any of your heroes. But remember that the hero who has been chosen by you for the battle will get more benefit as compared to those who are ignored. So choose the hero wisely in ChronoBlade.

In ChronoBlade game, your hero needs powerful equipment to slay down the bosses, powerful monsters, enemies. The game features amazing weapons; swords(Jotunheim sword, Asgard sword, and many more), armors(helmet, leggings, and many more). These types of equipment can be collected by completing stages in adventure zone or just tap on an equipment in the equipment section and then tap on the icon, check the source from where you can get that particular weapon or armor.

To level-up a weapon or armor, you need crafting material, can be obtained by completing the stages in adventure zones, as a reward in other game modes, from the chest.

The skill of the hero used while you are fighting against enemies, bosses, the arena or in dungeon mode. The player can equip or unequip the skill of a particular hero to increase the power of heroes. These skills unlocked as you level-up your profile. Upgrading the weapon help you in increasing the power of a hero. You need skill points for upgrading, so upgrade those skill which benefits you.

In the beginning of ChronoBlade game, most of the features are locked, these modes or feature unlocks once the player meets the minimum requirement of a level. You need XP to level-up the profile. XPs can be obtained by completing quest tasks, claim daily rewards, complete stages in adventure zone, play other game modes and win battles. 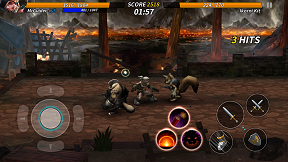 Without using skills, you can not win the game, so skills are important and you should use them efficiently because they are limited, after one-time usage, you need to wait for few seconds. Some skill needs mana. Mana can be generated by hitting enemies, once you have enough mana, skill activates on the spot.

So how to use skills efficiently? You can get three stars at every stage even if you don’t use frequently. Just use the combos, hitting an enemy ten times without being hurt activates a special attack, tap on it and use. It is much powerful and saves your skill/mana for the boss fight.

To get three stars, you need to complete the stage before a fixed time limit.

The boss fight is one of the toughest fights in ChronoBlade, it would not be easy if you have no active skill at that time. So save skills/mana for the boss fight.

Dodge the attacks – The monster takes a few seconds to attack, if you see the red zone, get yourself out of it or dodge the boss attack to save your HP.

After dodging, it’s your turn, use the skills, unleash the combos, and damage as much as you can.

Go to the store section, then chest, there you can claim your free chest. These chests include crafting material, equipment shards, and experience potions.

ChronoBlade is a great side-scrolling game, it has good graphics, gameplay, and you should give it a try if you love platform-type action games. Download ChronoBlade by nWay Inc. – here(Google Play Store).