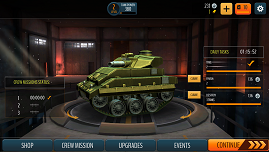 Tank Battle Heroes is a new tank game for Android in which the player controls a tank on the battlefield and destroy other tanks. It features hundreds of challenging missions, and event mode is coming soon. In the beginning, the game is quite easy, but after initial levels, it would be hard to destroy tanks or achieve all types of objectives. 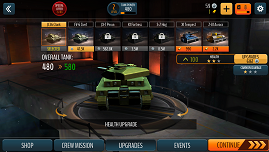 The game starts with a tutorial in which you learn about the basic of the game; upgrading of tanks, how to control tank, fire bullets, and much more. Once the tutorial ends, the player independently handles the game. Let’s take a look at all the things of Tank Battle Heroes. Also, see – Top best action games for Android of 2018

The game features 3D graphics, everything is well-polished. You will experience a good gameplay on your mobile device. Controls are also responsive & smooth. There is a control on the right side of the screen and a fire button on the left side of the screen. It is by far one of the best offline tank games for Android of 2018. Also, see – Best offline games for Android

The game also has the energy system, you can not play it endlessly. Fuel is required to play the game, you have limited quantity of fuel, refill takes some time. Either wait or watch video ads. Also, see – Top new best Android games 2018

Tank battle heroes feature over 100 challenging missions, 8 tanks with special advantages. You get the victory after you complete the primary objectives such as destroy all tanks on the battlefield, collect stars, survive for few seconds, and more. 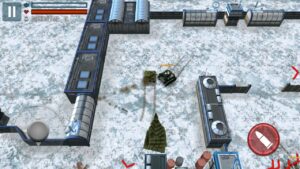 Before you start the battle, take a look at the objectives that you have to complete. You can also buy power-ups before entering the battle. In most of the missions, your primary objective is to destroy all the tanks. To make it easy, you have to upgrade your tanks. Spend some bucks to upgrade the performance of your tank. Other tanks on the battlefield will also attack you by firing bullets⇒ keep your tank in moving state, rotate it, go behind the walls to avoid their attacks and save your health. Also, see – Best 3D games for Android

To complete hard missions in Tank Battle Heroes game, you should upgrade the attributes of your tank; HP, Damage, and more. Without upgrading, you can not even stand against powerful tanks. So upgrade your tank, collect bucks and get a new tank for the hard missions. Also, see – Top new best Arcade games for Android

You have one crew by default, head to the crew section of the Tank Battle heroes and send your crew to the battle. You will get bucks for free without playing the game. But the amount is low and limited. Also, see – Top best Pokemon games for Android of 2018

To unlock new tanks in the Tank Battle Heroes game, level-up your profile by earning EXP. EXP can be earned by getting victories in the missions.

To complete hard missions, you need a powerful tank. To buy it, you need bucks. So one of the best way to earn more bucks is “double your reward by watching a video ad”. After getting the victory, you have the option of “double reward by watching ad”. Also, see – Best platform games for Android

As mentioned above, you have two types of objectives; primary and bonus. Complete bonus objectives and earn more rewards. Bonus objectives such as collect stars, don’t lose health in the battle, and more. Also, see – Best games like Candy Crush

Tank Battle Heroes is a great offline tank game for Android. It has good graphics and gameplay. Currently, it is in the early stage[Beta], you might get new features in the future. Download Tank Battle Heroes – here(Google Play Store). Also, see – Top new Android games today