POPJOY has just released a brand new CN game for mobile and it features all your favorite characters from favorite cartoon network shows; Ben 10, Adventure Time, We Bare Bears, Steven Universe, and more. The game comes with a variety of game modes; 1v1(League Mode), Plunder battles(Win Game mode), Kingdom(Friendly Match), Training, and more. Additionally, it features a popular game genre mechanics. In Cartoon Network Arena, you will fight against other players from all over the world in real-time and summon the best characters on the battlefield to destroy the enemy player’s castle, guardian. If you have not played any RTS game before or struggling to get wins in Cartoon Network Arena game, then our Cartoon Network Arena guide, tips, cheats & strategies will help you. Let’s dive in! 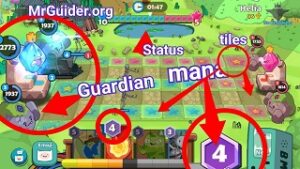 Before you dive into our main guide, tips, cheats & strategy part, let’s have a look at the basics first. In the game, you build the deck of 8 cartoon character cards for the battles. However, In the battle, you have only four choices as only four cards are displayed. New cards appear as you use the currently displayed cards. To use a card, you need mana points. Mana Points regenerate over time, as you play.

You can check the mana cost at the top-left corner of cards. Since you have limited mana points, you will have to summon the units or cards wisely on the basis of the situation. Let’s learn every aspect of the game:

Direct Win – To win the battle, you have to destroy the enemy’s castle in given time. The player who destroys the opponent’s castle first wins the match and earn trophies, stars, card packs, and coins.

GUARDIAN WIN – If both the player fails in destroying the castle, then the number of guardians will determine the victory. There are two guardians; left & right side of the castle. The player with the most guardians gets the victory.

Tile Count Win – If both the player failed to destroy the castle and both the players have the same number of guardians, then the number of tiles will determine the victory. The player with the most tiles wins the match in this condition. In case you don’t know, when your character walks on the tile, that becomes yours. You can also check it by counting blue and red tiles. Blue tiles are yours. Red tiles denote enemy’s claim.

Cartoon Network Arena game offers the same reward system which can be found in any other RTS game. Upon victory, you earn card packs, trophies, coins, and stars. You have five free slots in the packs menu. So you can store up to five card packs at a time. After getting the victory, you will have to open the package. And it takes hours, depending on the quality of the pack. If all the slots are occupied, you will not get more packs even on the victory.

Stars are required to open the star pack. After opening a star pack, you will not get more on that day.

GAINING TROPHIES, MOVING TO NEXT WORLD

Along with the bunch of rewards, you also earn trophies. As you gain more and more, the game will promote you to the next world. As you unlock new worlds, more new game modes, characters, features will get unlocked. You start from world 1, with 0 trophies. Here’s the tree chart:

Coins are used in upgrading the character cards. Candies are used in buying premium card packs from the shop. To earn coins, win the battles and open card packs. You can earn candies by completing the achievements.

How to upgrade the cards? 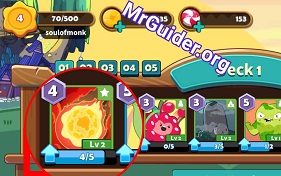 Go to the deck menu -> there you can check all the cards. Just below the card, you can check the number of duplicate cards required to upgrade. When you have enough, it will show you the green arrow at the bottom of the card. Tap it and upgrade using the coins.

If you go to the deck menu, under the card collection, you can check the list of cards or characters featured in Cartoon Network Arena game. To unlock the cards, you must meet the requirement. For example; To unlock the Ben 10, you must be in world 5. Read the trophies guide above for details.

If it is showing “available” status, then you can obtain it from card packs. You get these card packs from the arena battles(upon victory), by collecting the stars, from free packs, and in the shop menu, using coins or candies.

There are three types of cards in the Cartoon Network Arena game; building, unit, and magic. Building type cards can be placed in the gap between tiles on the battlefield. Example: Candy Cannon is a building type card. It throws cannon balls from a range.

Magic – Magical cards are used to strike down a group of enemies or enemy’s building, guardian, castle. All you have to do is select the card and tap on the area where you want to use it. Example: Meteor, Knife Storm.

Go to the deck menu -> tap the card -> there you can check unit type, range, attack or target, movement speed, and more stats; HP, Attack.

1.) Mix The Deck By Including All The Units

You can add up to eight cards in one deck. So we would recommend you to include all type of cards; magic cards, to destroy the group of enemies. Air type units to attack ground & air units. Building type units to defend & attack continuously. Defenders(High Hit Points Stats) and attackers(High damage stats).

But only building the best deck would not help you. You have to use mana points wisely and deploy the units wisely.

2.) Use The Defend And Ranged-Attack Strategy

You can also try out the air combination. Place building in the middle. Use the magic card at the right time – to destroy the enemy building.

4.) Check Out The Store And Grab The Deals

As you know, duplicate cards are required in upgrading. Make sure to don’t miss the daily card deal. Go to the store menu -> on the left side, tap the cards tab -> there you can check out the daily deals. In this section, you can spend gold coins and grab the cards.

As you progress through the game, you will be able to join or create a Kingdom(Group for players). With this function, you can challenge other players(friendly) and learn new tactics. Additionally, there are more benefits too.

You can use candies to open the card pack instantly. But don’t do it. Save candies and open the premium card packs from the store to obtain rare, ultimate and legend character cards.

And don’t forget to upgrade the cards as it not only boost the strength of the unit but also provides you EXP. As you gain more and level up, guardians will deal more damage in the battle.

So these are our top Cartoon Network Arena tips, tricks & a guide for the beginners. Also, see – Best strategy games for Android