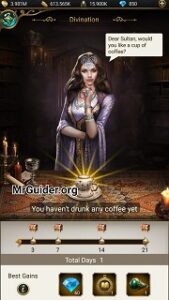 Here’s everything you need to know about the Game Of Sultans game. This article explains to you how to use seals, about Divination, Union, and more

Hello Sultan, in this post, we have shared an advanced Game Of Sultans guide for those are still figuring out the complex game’s mechanics. If you are a beginner, then you should check out the basic guide here. In the last post, we shared a detailed guide on Heirs, Consorts, and Events. But we did not explain to you PvP mechanics, what is divination, Feast, Union, seals, and more. This article will cover everything you need to know about the Game Of Sultans game. We would recommend you to check out the old post(check Game Of Sultans basics here) before you go deep into this post.

Arena mode unlocks once you activate the 15 Viziers in your empire. In PvP arena mode, you battle against other players’ army and gain ranking points. At the end of the season, the game will reward you bunch of items such as the badge, levy seal, Viziers’s Rings, gold coupon, and more. On the main screen of Game Of Sultans game, at the top-right corner, tap the ranking rush option. There you can see your current rank and the list of rewards you can achieve.

PvP seal is another one of the main in-game items in Game Of Sultans. As you know, we can play PvP arena mode a certain number of times. But if you want to rank fast, then you will need to attempt more and win more battles.

This PvP seal allows you to play PvP arena once you consume the free attempts. As of now, we can play PvP for free 4 times. After it, you can use PvP seal if you want to play more. How to obtain PvP seals? You can obtain PvP Seal in Game Of Sultans by completing the main quests, from events, store, and by completing the achievements.

As you know, we can play or participate in Boss Fights or Hunting Grounds a certain number of times. If you want to play these game modes after consuming the free attempts, then this PvE seal item will help you. Please check out our previous post to know about Hunting Grounds(Frontier).

Divination is another facility in Game Of Sultans where you can interact with a beautiful consort. There you will see a food item; tap it to give it to the consort. But only once a day. This will reward you diamonds, orb(orb is used to restore the vitality of heirs, read the previous post to know about Heirs), Vigor Orb(it is used to restore the Vigor, Vigor is used to visit the Consort), and much more. Just tap the item to know about it(long press).

At this facility, you can handle foreign affairs. In short, here you interact with the envoy. All you need to tap the character and claim the rewards. You could get a maid in reward. Complete the chapters in campaign mode to interact with multiple envoys.

Maid, you receive in reward when interacting with Envoy at Imperial Council. This will increase the charm of Consorts in Harem. Read our Game Of Sultans previous post to know about Harem, Consorts, Heirs, Marriage.

Feast is an intersting feature in Game Of Sultans. At this facility, you can host or attend the feasts. You can attend feasts three times a day. First of all, you need to host the feast. Just tap the castle and spend diamonds. Prior to it, you need some items; Feast Food or Feast Token. You can obtain Feast Food or Banquet Food by completing the events or by attending the feast. Same with the token.

Go to the Feast Facility -> at the bottom-right corner, tap the button; Go For A Feast. After it, enter the player ID(read the guide below to know how to check player ID). Once done, attend the Feast. Attending the feast rewards you tokens, feast items, and much more. On the same screen, at the top-right corner, tap the token store option and spend tokens.

In short, you need to attend the Feast first or obtain the feast Food; Play PvP, rank-up, claim the rewards to get food. Or complete the events.

How To Check Player ID in Game Of Sultans Game?

It’s very easy. Head to the main screen of the game. At the top-left corner, tap the character’s portrait; just below of your name, you can check the player ID. If you don’t have friends, then it would be better to join a union; you can create or join the union once you reach Young Sultan V post. Or go to the rankings page -> tap the player and you can check his/her ID there; you can also ask for marriage if you have Heirs to propose.

In other games, this feature called as an alliance, clan or guild. In Game Of Sultans, it’s union. Basically, it’s a group of players who join together, contribute together, and get benefits. Just head to the union facility and join; you can create own also or join other unions. Complete the union quests and get free rewards. There is also a contribute option; you can contribute diamonds and earn silver coins. Go to the redeem tab and there you can spend these coins.

Exploration: In the union facility, there is an option named Exploration. Tap it and then tap the ship. Select the Viziers to participate in Union Voyage or to get free rewards. You can deploy one Vizier for free. Spend PvE seal to deploy one more.