Basics – Dinosaurs Are People Too – Get Started 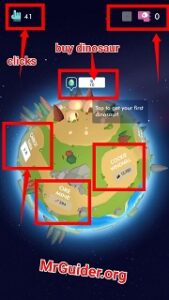 Before we dive into the Dinosaurs Are People Too cheats, tips & strategy guide part, let’s learn the basics first. In Dinosaurs Are People Too game, there are two main things; dinosaurs and resources. Since it is a tapping game(Idle Clicker), your job is to keep tapping on the world and generate clicks. Using the first 10 clicks, you get the first dinosaur. These dinosaurs help you in producing the clicks. Usually, you have to tap the world to generate clicks. But as you unlock more dinosaurs, your workload will reduce and the game’s mechanics will work in the Idle state(Dinosaurs will generate clicks for you). After it, you unlock the carrot farm and start the carrot production. We will go deep into the resources in detail in the guide part below. For now, just remember that tapping and upgrading is your main job. 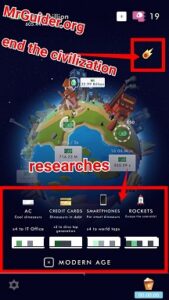 Research System: – Using the resources such as carrot, bolt, power, ore, you can unlock new technologies. For example – You start the game in paleo age environment. In this stage, you research tools, clothing, and fire. After researching all these technologies, you will move to the ancient league. In the ancient age, you research bartering, bricks, wheels, and writing. After unlocking all these techs, you unlock middle age. We will go deep into each stage(age) in the guide part below. For now, just remember that researching is the only way to progress in Dinosaurs Are People Too game.

There are four key points in Dinosaurs Are People Too game: –

Trading: – There is a technology in the ancient age stage; Bartering. Researching this technology unlocks the barter system. After it, you will be able to exchange the resources for resources. For example; obtain carrot in exchange for ore.

Money: -In the Industrial age stage, there is a technology named money. When you unlock this, all the resources such as the bolt, power, the carrot will turn into the money. In short, everything would be money.

Rockets: – In the modern age stage, you invent the rocket and shift to the moon. You can move back to the earth anytime by tapping the earth icon on the right side of the screen.

Fossil Fuels: – Fossil Fuels can be obtained by resetting the progress. How? When you reach a certain milestone(trillion or more in threshold), you will see a meteor icon on the top-right side of the screen. Tapping it will give you the detail of fossil fuels; how many fossil fuels you will get by ending the civilization. Confirming it will reset your progress; upgrades, dinosaurs, clicks/money, and all. So what’s the benefit? By using this feature, you will obtain fossil fuels. These fossil fuels provide the bonus to all the buildings. For example; you were earning 50,000 cookies per second. Next time, at the same stage, when having fossil fuels in hand, you will earn more(depending on the bonus). For example; you got a 110% bonus. Then all your buildings will produce +110% resources.

Dinosaurs Are People Too Guide

In this part, we will learn about the resources, trading, upgrading, and much more.

The default resource is the click(s). You generate clicks by tapping the world. After it, you will buy a carrot farm and produce the carrots. Let’s learn in detail: –

In the industrial stage, you will unlock the money system and everything(carrots, ore, cookies, bolt, power) will be money.

Dinosaurs Are People Too game features 10 dinosaurs. After collecting all, you will be able to increase their population. They help you in generating money(clicks) even when you are not tapping the world. And while you are offline. In short, they generate clicks. The more dinosaurs you have, the more money you will make without tapping and when offline. 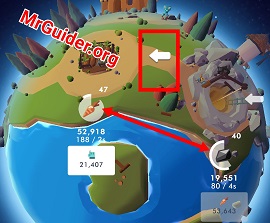 Note: – It unlocks in the ancient age stage and when you research the technology. 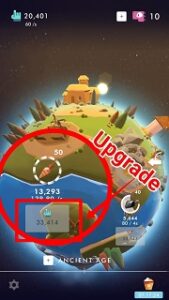 There are certain levels on which a production center gets a boost. For example; a carrot farm is producing 200 carrots per second. After crossing the milestone level, its production will be increased. These bonus levels are; 25, 50, 75, 100, 125, 150, 175, and so on. And it seems to be there are over 1000 levels as we have crossed 1000 level in this game recently. We would recommend you to reach the level 100 first and then focus on the next building. And then another at 100, and so on until you get the fossil fuels.

2.) Make The Dinosaurs Happy By Accepting The Offer

Tapping the world generates clicks. But if you tap the building, then the production center will produce the resources fast. For example; tap the cookie mill to produce the cookies fast and you will also generate clicks/money.

After researching the barter system, dinosaurs will be able to exchange the product in exchange for products. Why should you trade? Because you get more resources. For example; if you need the carrot, then sacrifice ore by tapping the ⇐ icon. You spend 100 ore and in return, you could get over 300 carrots(depends on the progress rate, fossil fuel, level). Read the trading guide above.

5.) End The Civilization For Fossil Fuels

In Dinosaurs Are People Too game, you can obtain fossil fuels by ending the civilization. This feature gets unlocked when you are earning quite good. On the right side of the screen, you will see a rocket icon. Tap it and confirm. Next time you will start from the beginning, but with the powerful boost. Read the basic guide above for more info.

You will often notice a UFO on your screen. Tapping it will give you resources or clicks or other items, based on your current progress. If you want free items, then make sure to keep an eye on it.

So these are our top Dinosaurs Are People Too tips, cheats & a strategy guide for the beginners. Also, see – Best Idle games for Android like this

2 thoughts on “Dinosaurs Are People Too Tips, Cheats, Guide To Go To Moon”