The Auto Battle Chess genre is now in trend – and, if you have been following the recent mobile gaming trend, you would know about the games such as Auto Chess and Chess Rush. The popular mobile game developer, NetEase, well-know for the LifeAfter game and other Onmyoji games, has just released an auto battler chess game called Onmyoji Chess. It’s a fun game – but the only thing that you may not like is the long-battles. It’s not a fast-paced game – you will spend more than 20 minutes(+10 Mins on Battle Royale) on a single game – except when you get defeat. In today’s post, we have shared Onmyoji Chess guide and Onmyoji Chess tips, cheats & strategies to win battles. So let’s not waste any time and navigate to the main content.

The Basics – How To Play Onmyoji Chess?

As a newbie to the game, we all start from the Novice tier – as you play the game or get to one of the top ranks, you will earn points – and, the game will promote you to the next tier. As the tier increases, you will face pro players in the battle, and it would be hard to hit the top rank. You can check your current tier at the top-left corner of the lobby screen. Here’s the tier list: –

Depending on the tier or rank, you will be matched with random players. You can also play with friends. After tapping the match button, on the next screen, you can choose friends. So let’s learn how this auto battler chess game works! 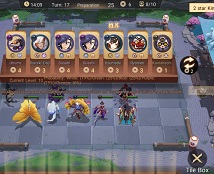 To fight other players, you need to deploy the characters. These characters are called Shikigami. After the match starts, you can buy the Shikigami(s) with coins. You get free coins at the beginning of the battle – and, as the match continues or stage progresses, you get more. Spending coins wisely is one of the tactics that you need to master.

⇒At the top-center of the screen, the game displays useful info – time, turn, time remaining for the next round, coins, and the number of Shikigami that you can deploy on the board.

Onmyoji Chess Guide To The Combat 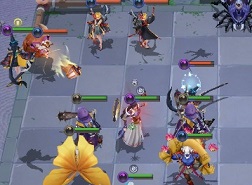 Once you have deployed the Shikigami(s) on the board – they will fight the enemies right after the battle initiates. Now, how do they attack? It depends on the Shikigami(s) role – for example; tank role Shikigami(s) attack from close-range. Marksman attack from a long-range. Read the Onmyoji Chess Shikigami/Characters guide below for more details.

Above the character or Shikigami, there are two bars; the red bar and the blue bar. The red bar displays the HP of the Shikigami. Once it drops to NIL point, that Shikigami will vanish from the board till the next round.

And, the blue bar shows the SP – your character will unleash the skill once this bar fills out completely. All the Shikigami(s) in Onmyoji Chess game possess amazing skills.

At the bottom-center of the combat screen, there are lots of slots for the characters where you can keep the extra Shikigami(s). You just drag & drop them to the battlefield. On the right side of it, tap the tile box option -> from there you can buy Shikigami.

In each turn, the game gives you random stuff; characters to buy. You can refresh the characters list by spending (2) coins. Tap the refresh button next to the list banner.

To sell the Shikigami, tap him/her in the character inventory and then choose to sell.

On the right side of the combat screen, you see the list of players and your position. Also, it shows the HP of the player. If you get defeat, you lose the HP or points – and, once you reach 0, the game will knock you out from the combat – although, you can spectate the battle.

Tap on a player to check his/her board – position of the Shikigami.

Getting familiar with the characters or Shikigami(s) is extremely important – yeah, it’s an auto battler chess game – but you have full control over your destiny. If you pick the characters wisely, you will surely get to the top rank in the leaderboard. Let’s learn about the characters in Onmyoji game: –

Each Shikigami attacks or acts differently in the battle – and, each belongs to a certain type & specific position. Let’s learn about the positions and the types: –

In the lobby, on the left side, tap the (?) help option -> on the next screen, at the bottom menu, head to the Shikigami tab to get a complete list of characters. Tap on the character to get his/her details – skill details, type, position. 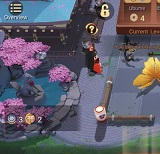 The reason for giving the details of types & positions in the above part was to explain the bond effect. As you know that all these units have a specific position and a specific type. On the board, you can deploy multiple characters(Depending on the max size). If you deploy a certain number of Shikigami based on their position and type, the bond effect will get activated.

Go to the (?) help menu (lobby > help) – and then, head to the position or type tab. There you can see the requirements to activate a bond effect.

Deploy (3) Ninja(s) on the board to increase the critical rate and critical damage for Ninja Shikigami. On the left side of the bond effect, it shows the number of Shikigami required to activate that effect.

Similarly, head to the Type tab -> there you get the details – requirements to activate a type effect/bond effect. For instance, the relic soul effect reduces the armor of all enemy Shikigami(s). And, to activate that effect, you need to deploy (2) or (4) Shikigami belongs to relic soul type.

On the bottom-left side of the combat screen, you can check the bond effects(if activated).

So this would be all in this Onmyoji Chess guide for beginners. Let’s have a look at top Onmyoji Chess tips, cheats & strategies!

As you know that you can deploy a certain number of characters on the board/battleground. And, if you want to increase the chances to get the victory – you need to get stronger.

There are two ways to get stronger – deploy more Shikigami or upgrade existing Shikigami.

To deploy more Shikigami, you will need to increase the squad size. And, for that, you will have to increase the board level. Spend the coins to grant EXP and level up to deploy more characters. This is time-consuming – it takes many turns to save so many coins. But you should try to take it to at least 7-8 size.

Upgrade Shikigami – You can fuse three identical Shikigami and increase the power. For example – you can fuse 1-star Yuki(x3) into 2-star Yuki(x1). That means (3) Yuki will fuse and you get (1) upper-grade/level Yuki.

Pay attention to the tile box and grab the identical units if you want to get stronger in this way. When you have (3) units of a specific grade, you can use the pong option on the screen to fuse.

We would recommend increasing the size of the squad so that you can deploy more Shikigami. And, focus on only one or two Shikigami upgrades.

3.) Get Familiar With Shikigami

If you want to master the game, then you need to learn all the details of each Shikigami. We would strongly recommend you to read the skill details, CD, type/position effect, etc.

On the contrary, purchasing or picking units randomly would not take you anywhere in the leaderboard. Go to the lobby and tap the help option to get the list of characters, their skill details, bond effect details.

So this would be all in this Onmyoji Chess guide and tips for beginners. Do you have more tips or strategies? Comment below!