111%, the publisher behind top-class games such as Wild Tamer, BBTAN, Royal Dice, has just published a brand new game called Survivor Mr. Who. In this Survival RPG, the player plays as one of the available characters and try to survive in the apocalypse. Enemies appear every night and try to destroy the hideout along with you. As a survivor, you have to build a solid hideout and make the character stronger. In this Survivor Mr. Who guide and Survivor Mr. Who tips, cheats & strategies, you will learn all the basics of the game.

As you know, our character’s plane has crashed and he is in an unknown location. You have to help him survive – the top things that you need to survive are a hideout, food, and fences/defend. The day might seem peaceful – but as the night comes out, the threat will shine. Enemies spawn in the night and will try to kill your character. And, as the day passes, more enemies will spawn.

What if the character dies? You will have two options – confirm the reward(depends on the survival) or watch the video ad and get back to the previous day! What’s the reward? You get gems! The gem is the basic in-game currency in Survivor Mr. Who that you need to unlock characters, drones, upgrades.

Before you start the game, the player needs to select a character and a drone. In the beginning, you will play as Mr. Who. Survivor Mr. Who features many characters – and, all these characters have a unique skill/ability. For example – Mr. Who has warrior skill/ability – increases the melee attack. Let’s take a look at the characters!

The first character that you get for free in the game. Skill – warrior(increases melee attack). Blacksmith! (+Weapon Efficiency).

Unlock Druid by spending 200 gems. Skill – Egg Hunter(get additional eggs from the nests). From the eggs, you get the pets. Wild Tamer! (+Pet ability).

In this part, we will get to know about the basic strategy! Your objective is to survive as long as you can – so that you can earn more gems. And, to survive for a long period, you should be focusing on building a strong hideout. On the top-right side of the screen, tap the hammer icon -> at the bottom menu, you get a variety of items/categories – turrets, fences, facilities, decoration.

To build or craft these items, you need to gather materials such as wood stick, stones, water, fiber, marble, stick, stem, leaf, etc. The game displays the number of resources required to build an item just below of it. You can get more information on that item by tapping the (i) icon.

Tap the book icon on the top-left -> journal – there you can check complete collection of resources, enemies, and the pets.

At the top-center of the game screen, the player can keep track of the HP and food status. Maintaining this status is necessary -> if the HP drops to 0, the character will die. And, if the character is hungry, HP will reduce gradually. So you need to focus on these two things to survive for a long time. You can cook the food by building the campfire in the hideout. And, stay in the hideout – eat food – recovers HP.

How To Get Gems For Free? 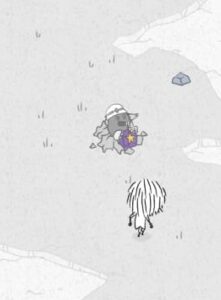 What are the Keys?

To unlock chests scattered in the area – you need the keys. Keys can be obtained by watching the video ad or exchnage for the gems.

What are the special items?

To repair the plane, the player needs to require a certain number of special items. These special items can be obtained from the boxes or chests. And, as mentioned above, you need the keys to unlock these chests. These special items would not be eliminated even the character dies. So, if you are afraid of losing these items, then don’t worry.

Out of all these, we would recommend spending on the gatherer attribute – you will be able to gather more resources quickly and it helps you quickly build the hideout. In the early game, you would not be able to fight because of low-quality gears or no gear. And, to get them, you will need to build facilities, which require the resources. So that’s why we are recommending spending gems in upgrading the gathering ability in the initial game. After that, you can spend on health & strength.

The day in Survivor Mr. Who passes quickly. You should not waste any time and focus on gathering the items/resources. In the initial game, it’s better to focus on building the basic facilities: –

As you explore the map, you will find lots of chests. Watch the video ad and get the keys. Use these keys to open the chests for special items. Collect these items to repair the plane. At the top-right corner of the screen, tap the play button on the key icon to get keys for free.

At the upper-left corner, tap the quest icon -> there you can check the achievements & the missions. Complete them for free gems.

5.) Keep The Character In Good Status

6.) Cook The Food At Bonfire

Bonfire is one of the basic facilities that you should build as soon as possible. You can cook a variety of dishes such as roast worm, fried egg, and roast apple. These food items increase/recover HP, attack, attack speed, etc. Cook and consume to get all these buffs.

At the upper-left corner, keep an eye on the free gears offers. Watch the video ad and grab the deal – if it’s good.

8.) Trade With The Vendor

A vendor often appears in the map – interact with him to trade. You can get free gears by watching the video, exchnage the resources for a valuable item, exchnage the gems for special items, etc.

So these are some basics Survivor Mr. Who tips for the beginners. We will post more guides & tricks on this game soon. If you have more tips to share, comment below!

For More Updates, Game News, Game Guides, New Game Releases, And ALERTS – Like Us On Facebook – MrGuider, Follow Us On Twitter – @techhuntr. Check Out – Top New Android Games Today. So, do you have any suggestions? Submit Here