Titan Throne is a new castle building real-time strategy MMO game in which you take the role of a leader and lead the army of troops, heroes, beasts to dominate the world. Your city is established on a random location on the world map, surrounded by other players’ cities, monsters, resources, and hidden treasure. Other players can invade your city anytime. Commander! You must defend the city. Increase the battle power, upgrade heroes, troops, building, research, and build the best castle in Titan Throne game. And today, In this post, we have covered everything about the game you need to know: Titan Throne guide and Titan Throne tips, cheats & strategy guide for the beginners.

Before we dive into the main guide, tips, cheats & strategy part, let’s learn the basics first. In Titan Throne, you have to increase the power of your city in all the fields; military, resources, and development. And another main thing on which you have to focus on is the defense power. In the early stage, no one will attack your city. But as you progress or upgrade castle-Orc level, your city will start getting attacks. You will lose troops, resources, power if the enemy gets successful in the attack. Let’s learn step-by-step: – 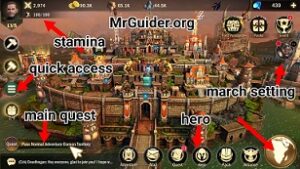 Titan Throne game starts with a tutorial in which you learn about the basics of the game. In the first even, you attack a group of enemies. And then, the game will ask you to choose a race. Titan Thron game features four race; human, elf, Orc, and Undead. There are different heroes in each race. And all the heroes have different stats. You can choose only one race at the start of the game. After it, you would not be able to change it. So choose wisely. We would recommend you to choose Human(ranged units, melee+buffs+physical defense), Orc(melee+heavy damage) Or Elf(ranged units. melee+high luck).

After confirming the race, you will follow the tutorial in which you upgrade and build the buildings in the castle. Titan Throne game has two main game modes; adventure and PvP. In the adventure mode, you complete the stages and earn rewards. In the PvP mode, you attack the enemies and steal the resources. Here’s the main screen guide: –

In the above paragraph, we mentioned, you have to take care of three aspects; resources, development, and military. Let’s learn about all.

How To Protect The Resources?

When an enemy attacks, he/she has to defeat the guards at the city wall. Once defeated, the enemy’s army will collect the resources from the production centers. It would be a huge loss to your city. How to protect the resources? The first and the best way is by increasing the defense power(read the guide below). Or upgrade the depot. All the resources you collect from the sawmill, quarry or more centers go in the depot. The depot protects the resources from being plundered. Upgrade it to increase its capacity(to protect more resources).

How To Gather More Resources?

There are a number of ways to get more resources; complete all types of quests(main quest, daily tasks, event), from adventure mode, attack a city and steal the resources, from the world map, by defeating the monsters on the world map. You can increase the production of resources by researching in the college.

The more resources you have, the more intruders will attack. Be prepared.

Development is related to the buildings. To grow the city, you need to build and upgrade the buildings. There are many buildings in the city. Among all these, Castle-Orc is the core. Upgrading the castle increases the market tax amount, battle power, amount of XP reward, and unlocks new buildings & features such as Beast Totem, crystal, and more. Upgrading and building take time. You can increase the construction speed by researching in the college.

The military is related to the heroes, troops, and their strength. Heroes lead the troops in the march and provide buffs to the troops. Troops attack the enemies, monsters, gather the resources, protect the city, and contributes to the battle power. Let’s learn how to attack. And after it, check out our Hero guide, troop guide, and Titan Throne tips, cheats & strategy. 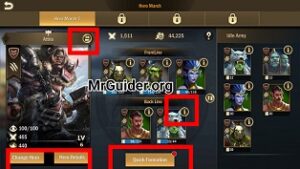 In Titan Throne game, hero’s stats(leadership, skill, and more) impacts the whole army. So make sure to choose the best hero when marching. All heroes have some specialty. To know, tap the hero portrait on the Hero March Menu screen. To change the hero, tap the change hero button and select another hero card.

On the Hero March menu screen, tap the hero details button. This will take you to the Hero Details screen. On that screen, you can check the major stats and other stats; leadership, Troop HP, and more. On the right side, there are some sections; Enhance, Spells, and Gear. We will go deep into this part in the hero guide below.

How To Add More Troops In March?

A Hero’s leadership level determines how much troops he/she can lead in the march. If you want to add more, then you have to enhance the leadership stats. You can do it by enhancing the hero or by researching in the college. 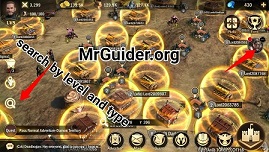 Once your army is ready, it’s time to march. There are two game modes; adventure and world map. On the main screen of the game, at the bottom-right corner, tap the world map icon. This will take you to the world map where you can see other players’ cities, monsters, and resources. Tap the search icon(on the left side of the world map screen) -> choose what you want to search; for example; if you want to search monsters, then tap the monster icon -> adjust the level by tapping the (-) or (+) icon.

After it, tap the go button. This will take you to that location. Tap the monster and send the troops by tapping the attack button. Your hero will lead the army and attack the monster. You get the battle report in the mail section of the game. Similarly, if you want resources, then search for quarry, sawmill, crystal, and gold mine by tapping the search icon.

The hero earns XP upon the victory. XP is required to level up the hero. Upgrade the castle to increase XP reward

Tap the enemy city on the world map -> choose to attack. You can not attack a city if the shield is active(yellow color shield). The two more options you see are; scout and rally. Scout – Send the troops to get the details of enemies. You get the scout report in the mail menu. In the report, you can check the power of the enemy city, troops, and much more. If you have more power, then attack. Rally – Join an alliance and attack a city with alliance members.

As mentioned above, a hero’s stats are very important. The stats of a hero impacts the whole march. You will get more benefit if the hero is powerful. Here’s how to increase the power of a hero: –

Level Up – Attack monsters on the world map to obtain Hero XP. You can also use an item Hero XP tome to level up the hero fast. Main screen -> at the bottom menu, tap the hero option -> select a hero -> info -> tap the + icon next to XP(Bottom-left corner).

Enhance -> Go to the hero details screen -> head to the enhance tab. To enhance, you need duplicate hero cards and other hero cards. Tap the + icon to select the other hero cards(you will lose these cards after enhancing).

How to get hero cards?

Go to the main screen -> tap the tavern building(near summoning portal) -> choose tavern option. On the next screen, you can recruit heroes in exchange for gold coins. Once recruited, you will see the hero in the hero menu. Duplicate cards(cards of a hero that you already have) are used in enhancing. Or from events and daily mission crates.

You can obtain gears by completing the quests, attacking the monsters. In the gear tab, tap on an empty slot and equip.

So this is the Titan Throne Hero guide for the beginners. Now, let’s learn about troops.

In Titan Throne game, to protect the city from intruders, you should appoint the guards. Tap the castle wall -> choose wall guard -> drag and drop the army units to the formation slot. Tap the (i) icon to check the troop details. Melee units attack nearby enemies; balanced in all the stats. Ranged units attack from a range; good damage, but poor HP/Defense. You can check the type of unit in the info tab(summoning portal -> troop -> info). Upgrade the troops to increase the defense power.

In the college, you can research on three types of technologies; resources, development, and military. We have explained all these three aspects in the guide part above. Keep researching and upgrading.

3.) Pay Attention To The Items

By completing the quests, events, missions, and getting victories in the battles, you earn a lot of items. Tap the pack option on the main screen -> this will take you to the items tab where you can check all the items you have. On the right side, tap the battle option to check battle-related items. Growth -> Items such as speed-ups. In the first phase, after completing the initial quests, you will get an item; elite teleport and alliance port pass. You can use the elite teleport item to change the city’s location on the world map. Alliance port pass -> move the city to a place near alliance leader.

4.) Participate In The Events To Earn Rich Rewards

On the main screen, at the top-right corner, tap the event option. There you can check the list of events. Participate in these events to obtain rare items.

5.) Increase The Battle Power, Here’s How

You can check the power of the city at the top-left corner on the main screen. To increase it, follow these guidelines; train the troops(recruit more and more), upgrade the facilities(buildings), research all type of technologies, upgrade the castle wall, and enhance hero & troops.

6.) Collect The Tax From Market

If you need gold, then make sure to collect the tax at the market on daily basis. Upgrade the market to increase the tax amount and the number of times you can collect. And in the market, pay attention to the deals; you can get precious items such as gear, guardian sword at a low price(diamonds or gold). If there is a rare item, then grab it.

So these are our top Titan Throne tips, cheats & a complete Titan Throne guide for the beginners. Also, see – Best strategy games for Android