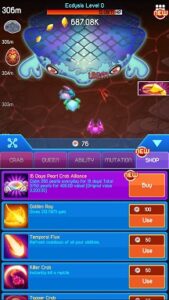 Crab War is an idle clicker game for Android by Appxplore in which you fight against reptiles and the powerful bosses. Here’s all you need to know about the game; Crab War guide and Crab War tips, cheats

As usual, it starts with a tutorial in which the player guided through about every aspect of the game; how to play crab war, about upgrades, leveling up, queens, abilities, and much more. The tutorial covers every basic aspect you need to know about the game.

The Basic – In the Crab War game, all you need to do is tap on the screen, add queens to your crab army, slay down the enemies, defeat the boss, earn coins, and use those hard-earned coins on upgrades. Here’s the process you have to follow in Crab War;

Let’s start the Crab War Guide to learn everything about the game clearly;

You just tap on the screen to call crabs and crabs will attack reptiles automatically. Crabs are of three types;

At the beginning of the game, Emerald and Garnet are locked. To unlock these crabs, you need to level-up your profile. You can level using gold. Gold can be obtained by playing the game.

One can not tap on the screen for a long time. Queen is the main character in Crab War game, automatically attacks reptiles. To unlock new queens, level-up your profile using coins. There are lots of queens featured in the game, unlock all to speed up your progress and reach the high level in no time.

Abilities or skills are temporarily boosters; to deal more damage, to earn more gold, and for other purposes. Unlock abilities by leveling up the main profile and enjoy the power of the temporary boosters. There are six abilities to unlock. Each ability has three talents. To unlock talents, level up the abilities.

Mutations are upgrades and these upgrades are very powerful as compared to other upgrades. You can purchase these upgrades or mutations using DNA. The player can obtain DNA by using or performing Ecdysis or evolving cabs after level 470.

One can find this feature in every Idle game. You level-up, earn a huge amount of gold, add new crews, and build up the army. And later, reset the game progress to earn the precious item. You can Ecdysis once you reach the level 650. Go to the crab tab, at the bottom, you would see this option. If it’s unlocked, then use it to gain DNA. Keep in mind that if you use it, you will lose your progress and start from the beginning. But you will get DNA and you can use DNA to purchase mutations for permanent boost. It’s definitely worth the try!

Gem is one of the precious items in this game. You use gems to increase the power of your crabs. Go to the menu -> gems. Complete the set of gems and get bonus boost.

The Gene tree in Crab War game provides a number of marvelous bonuses. Use gene points to enjoy these bonuses. You can obtain gene points by participating in the tournament. Rank higher to earn more rewards.

To defeat reptile queens and kings, you need to unlock King Crabs. When you reach 750m, King Crabs get unlocked.

So this is the Crab War guide for the beginners. Now, let’s start the Crab War tips, cheats to progress fast;

So these are some basic Crab War tips and cheats for the beginners. Download the game – Here[Google Play Store]. Also, see – Best adventure games for Android