Warrior Saga is a brand new RPG for mobile devices by HERO Game. Check out our Warrior Saga guide, tips, cheats & strategy to master the game

HERO Game, the creators of Hopeless Land survival game has recently released a brand new RPG named Warrior Saga, featuring 100+ characters, pixel graphics, epic challenging levels, and lots of game modes. The game combines the gacha, base building, and tower defense mechanics. Since there are lots of things to understand, it could be difficult for a beginner to figure out how things work in Warrior Saga game. So today, In this post, we have shared a complete beginner’s guide and tips; Warrior Saga guide and Warrior Saga tips, cheats & strategy to strike down the enemy captains.

Before we dive into the main guide, tips, cheats & strategy part, let’s learn the basics first. In Warrior Saga game, the player has to build a team of warriors. And powering up all the units is your main job. However, it would not be easy. In initial levels, it is very easy to get three stars at each stage. But as you progress, things will not be same as early missions. Even obtaining two stars would be difficult. But only for those who ignore skills, character deployment strategy, combo/partner skills, barracks, turrets, base, and value. Let’s learn step by step.

Warrior Saga game starts with a tutorial in which you learn the battle mechanics, leveling up, warrior upgrade, base building, upgrading, and much more. At the beginning of the game, you play the chapter mode and earn captain EXP(required to increase the captain/player level). As you level up, new features such as guild, PvP, warrior recruitment, dispatch, and more will get unlocked.

Basically, there are two main things you have to take care of; base, warriors. After reaching a certain level, a new mode will get unlocked; warrior arena. In this mode, you raid other player’s base and occupy it. And yeah! you also plunder their resources. Here’s the main screen guide: –

The picture shown above is the world map where you can see own base, enemy’s base(with red symbol), and other stations; fortress defense, chapters, and more. As you clear chapters, the fog will disappear and the new area will be accessible. Tapping the enemy base(red mark) will give you the option to attack. Attacking the enemy base is one of the best ways to gather the resources. Similarly, other players can attack your base. So make sure to improve your base’s defense. You can also change the enemy(tap the enemy base -> change – it will cost you coins).

All you need to do is set up the defense for PvP, power-up units, increase the base’s defense and captain power. We will go deep into the PvP defense, base, captain, and more in the guide part below. Let’s dive into the Warrior Saga guide and after it, check out our Warrior Saga cheats, tips & strategy to increase the power(value) fast.

In this part, we will learn about the warriors, battle, base, resources, defense, attack, and much more. Pay attention to all the parts to master Warrior Saga game.

Warrior Saga game features four types of characters; tank, DPS, support, and trump. In the early stages, you will have three choices; tank, DPS, and support. Let’s learn about all.

How To Get Warriors?

These characters are graded as follows: –

Among all these, S/SR/SSR rank characters are the best ones, but their drop rate is very slow. So don’t expect a high-rank character from the free summon.

How to upgrade the warriors or increase their power.

There are a number of ways to increase the power of warriors. Let’s learn about all: –

Leveling Up the warrior increases the stats; defense, attack, and HP. You can increase the warrior level using an item named EXP Potion. You can obtain this item by completing the chapter mode’s stages, missions, quests or as a reward. To use it, tap the warrior option at the bottom-right corner and just below the trump option, choose level up. Select the potion and then tap the warrior you want to level up. Keep in mind that you can not increase a warrior level beyond the captain’s level.

Ascend is another way to increase the power of units. And it increases the unit’s stats by a massive amount. To use this feature, you need fragments of that unit. For example; you have a character named explorer. And it has two stars. By ascending, you can increase its star level to 3. Go to the warrior menu -> tap on a warrior -> go to the ascend tab -> there you can check the number of shards/fragments required for star upgrade. You can obtain fragments from the vending room, by completing the missions/quest, warrior recruitment, and chapter mode. Or in the ascend menu -> tap the + icon just above the star upgrade button. And on the next screen, on the right side, under the path to obtain mode section, you can check the path.

By equipping a complete set of gears(Equipment), the upgrade option gets unlocked. Go to the warrior collection menu -> warrior -> upgrade -> equip the four gears -> tap the upgrade button.

And upon reaching the level 32, 57, two more upgrading option will get unlocked; warrior force and unique skills.

Level up and upgrade the warriors to unlock more skills.

On your base, you can build three types of buildings; economy, support, and combat. Economy buildings are; crystal generator, energy generator, and gold generator. These resources are required in upgrading the warriors, building the rooms, and many more tasks. Support buildings include hospital/clinic, grocery, stairs, laboratory, apartment, and dormitory. In the clinic, you can heal injured heroes.

From the grocery room, you can access the shop feature and buy plenty of items in exchange for gold or crystals. In the laboratory, you can research, upgrade the captain’s skills. And to increase the maximum population, build and upgrade apartment/dormitory.

Combat buildings include barracks, turret, and target range. Barrack trains melee units who help you in the battle in fighting against the enemies. Similarly, target range camp trains ranged type units. Build the turrets to increase the defense power of city/base.

Among all these buildings, energy core is the main room. Upgrading it will unlock more rooms/buildings and build the floors.

How To Set Up Defense For Warrior Arena Mode

There is a training room at the bottom of the building(base). Tap it and choose defense. Assign the units for the warrior arena mode. These units will fight enemy units who are trying to plunder your resources. 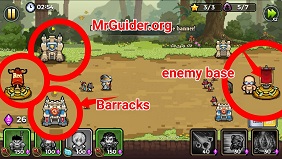 In the battle, you can choose up to seven units for the battle(at level 23). Prior to level 23, you can select up to six units only. And to win the battle, you have to destroy the enemy’s base. All you need to do is deploy the warriors, use their combo skills, captain’s skills, and defeat the enemy at all cost. And you also get help from barrack and target range building as these building trains melee and ranged units over time. Read the warrior saga game tips, cheats & strategy guide below to win battles.

So this is a short Warrior Saga guide for the beginners. Now, let’s check out our top Warrior Saga tips, cheats & strategy guide to master the game.

1.) Use The Universal Strategy To Select Units

Warrior Saga game’s battle mechanics are same as tower defense games such as castle crush, spellsouls, and more. And in all these types of games, the player has to select the units wisely. Here’s our recommendation; since you can choose up to seven units in the battle, make sure to include all types of units.

Defense units – To protect the attackers. Attackers – ranged type, to attack enemies from a range. Support – To heal allies in the battle. Read the warriors guide above to know more about unit types. Or go to the warrior info page -> check its skill, stats, role/type.

2.) Include Combo Skill Partner To Get More Advantage 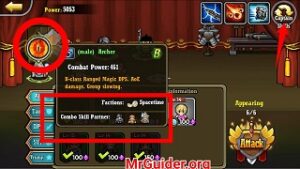 3.) Upgrade The Barracks And Target Range To Unlock Powerful Troops

Pay attention to the barrack and target range camp as these buildings train troops over time in the battle and these troops help you in attacking. Upgrade these buildings to unlock powerful troops.

Since you have low-rank units in the early stage, it would be hard to win against a powerful enemy. But gradually increasing their power will make it easy for you. All you need to do is level up the warriors, upgrade the barracks, upgrade the warriors, and research in the laboratory.

In the chapter mode, you can use a stage clear voucher on those stages in which you have got three stars. With this voucher, you will get the rewards instantly+bonus reward. All you need to do is go to the world map -> select the chapter -> tap the stage(cleared with three stars) -> stage voucher. And if you have not, then it would be better to repeat the stages and earn captain’s EXP, gears, EXP Potion, and many more items.

6.) Dispatch The Warriors To Get Chests

Go to any chapter screen -> at the bottom-left corner, tap the material transport option and dispatch the warriors. After a certain amount of time, they will come back with a chest. And this chest contains lots of precious rewards; crystals, potions, stage-clear voucher, gold, and more.

7.) Get Fragments Through Warrior Recruitment

From the chapter 2, you can access this feature. At the bottom-left corner, tap the warrior recruitment option -> go. Get three stars to get better rewards; gears, material, fragments, and more.

8.) Build Turrets To Increase The Defense

Building and upgrading the turret helps the heroes effectively defend the city from intruders. If you don’t want to lose precious resources, pay attention to it. Tap the build option -> combat -> turret. You can even change its type by upgrading the energy core. Tap the turret -> unlock and change.

At the top-right menu, tap the gift option and claim the rewards. You can claim the gift after every certain amount of time.

And go to the base -> there would be a room named lucky wheel. Tap it and hunt the treasure daily.

Completing the tasks and main storyline missions reward you a huge amount of captain EXP. If you want to level up fast, then complete these tasks as soon as possible.

11.) Pay Attention To The Enemy Power Before Attack

Before you attack, pay attention to the enemy’s power; weak, well-matched or terrifying. Attack the enemy base only when your team’s power is well-matched or good. On the world map -> tap the red/enemy base -> just above the enemy defense section, you can check the enemy power. Keep raiding and plundering the resources.

So these are our top Warrior Saga tips, cheats & a strategy guide for the beginners. Also, see – Top new Android games of this week