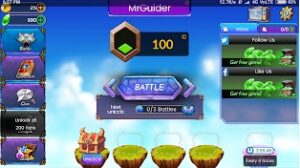 Beast Brawlers is an action game for Android, featuring PvP mode, in which you choose one of your best beasts and fight against other players from all over the world. Check out our simple Beast Bralwers guide and Beast Brawlers tips, cheats to quickly get new beasts

Beast Brawlers is a fantastic PvP game for mobile devices by PiiK games. It was in beta since last year and has been released recently as a full version. The game features a variety of game arenas such as Ice Cove, Ring Of Fire, Arcane Coliseum, Emerald Pit, and many more. And there is no energy system, so you can play it endlessly. In this post, we have covered everything about this game you need to know; Beast Bralwers guide, Beast Brawlers cheats, tips. Let’s start the Beast Bralwers guide first;

1.) Get Started – The Basic – Beast Brawlers

Beast Brawlers is a simple yet challenging game in which you control one of your characters/beasts at a point of time and defeat other players in the arena. The player can use its character’s skills to take a specific advantage, use spells to deal more damage, for healing, and for other purposes.

As usual, it starts with a tutorial in which you learn about the basic of the game; how to play Beast Bralwers, about upgrades, equipment, and much more. After the tutorial, you can play as you want. Use the joystick to control your character and at the bottom-right side, there are some combat controls; special attack, spell/potions. Your beast attacks the enemies automatically when they are in range; you just take it close to the enemy, that’s it. If it gets injured or killed by the enemy, you need to switch to another beast.

The Basic; In this game, you have to take care of plenty of things; beasts upgrades, equipment, potions, and much more. The game uses the division system to categorized the player rank; rank-up by getting the victories in the battles.

Let’s start the Beast Brawlers guide and learn everything about the game;

Beast is the main character in Beast Brawlers game. There are lots beasts featured in the game; most of them are locked at the beginning of the game.

How to unlock new beasts?

You can get these beasts from the treasure chests. You get chests by winning the battles or free after every 4 hours.

Beast’s stats are divided into these attributes;

Since beasts are important, you have to take care of them, To improve their stats; HP, attack power, moving speed, and other attributes, you need to upgrade it. You need beast cards to upgrade a beast, these cards can be obtained from treasure chests. To upgrade a beast;

The player can equip a number of options to unlock skills. There are lots of potions featured in the beast brawlers game such as;

Gem is one of the precious items in this game, used to open the chests instantly. To get it free,

On the main screen, look at the right side and you will see some social media icons; follow and get 50+50 gems for free.

There is a certain objective for each arena, you can select the arena by tapping on the label, just below the battle button on the main screen. For instance,

At Emerald Pit arena, the player with most points at the end of the battle wins the match. To earn more points, you need to defeat the players.

In Dark Forest Arena, the player with most orbs at the end of the battle wins the match. Explore the map to pick up orbs, defeat players to earn orbs.

In Ice Cove arena, you play with one more player as a team against another team with 2 players. In this mode, the team with most orbs at the end of the battle wins.

In short, look at the winning target on the battle screen. 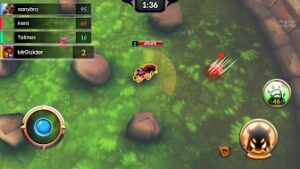 If the character is injured, then explore the map and look for healing boosters[red + signs]. You will find these boosters on the map near rocks.

You will get a special bonus if you destroy the crystal in the arena.

You can check the enemy HP on the bar. Compare it with your beast’s HP. If the enemy’s HP is more than yours, then keep away from them. In short, target low-hp beasts.

Tip 5.) Use skill and potions at the right time

After one-time usage of skill, you need to wait for few seconds until it gets charged again. So use the skill properly, at the right time. Don’t waste!

You can find new beasts if you rank-up to a new division. Divisions;