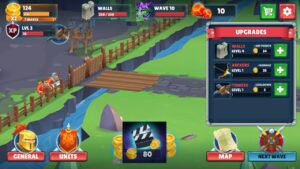 Game Of Warriors is a strategy tower defense game for Android by Play365. Here are some Game Of Warriors cheats, tips, and guide to easily destroy the enemy walls and towers

Game Of Warriors is tower defense game in which the player with the help of soldiers destroys the wall and tower of the enemy base and conquer the territory. Like other strategy games, in Game Of Warriors too, you assemble a team of soldiers, upgrade their attributes, use skills, upgrade buildings, and build a strong defense to save your territory from others. Let’s take a look at Game Of Warriors guide, tips, and cheats to easily conquer colonies and gather lots of gold for upgrading.

Get Started – Game Of Warriors 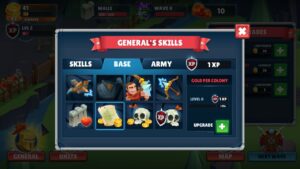 The game starts with a tutorial in which you learn about the basic; soldiers, general, how to attack, colonies, and more. After it, you can manage all the functions independently and play as you want. Game of Warriors features two game modes; the first one can be accessed by taping on next wave. Another one is exploring mode, in which your task is to conquer the colonies. In the normal mode, you have to defend your base from enemy attacks. In the explore mode, you attack enemy base to conquer it. Also, see – Best Strategy Games For Android

In Game Of Warriors, the general is one of the main characters and without using his skills, you can not get the victory. At the left bottom, tap on the general option and there you can see his attributes. The general has three skills;

These skills can be activated after the battle starts. And all the skills take time to activate after one-time usage. Upgrade these skills to improve attributes; damage and cooldown. Upgrading requires XP. Also, see – Best offline games for Android

This section includes the upgrades related to your base. Upgrade them and strengthen your base.

This section includes the upgrades related to the army. Upgrade them and increase your attack power.

How to earn XP?

In Game Of Warriors, XPs are required to upgrade the above-mentioned things; skills, base upgrades, and army upgrades. To earn XP, level-up your profile. You can earn level-up/XP points by getting victories in battles. At the top right, you can see your current status; level, XP points. Also, see – Top best Pokemon games for Android

After general, the soldier is one of the important roles in Game Of Warriors. Tap on the units section and there you can see unlocked soldiers. To unlock new soldiers in Game of Warriors, you have to upgrade the existing soldiers to their maximum levels. Coins are required to upgrade soldiers.  Also, see – Best platform games for Android 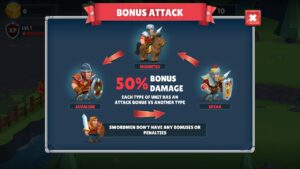 Game Of Warriors is a challenging game, after a certain level, it becomes difficult. These Game of Warriors tips cheats, and strategies will help you in defense, in gathering more gold, to conquer colonies. Also, see – Top new best Android games 2018

In Game Of Warriors, the bank collects coins from colonies while you are offline. You conquer colonies and earn gold for free. These colonies provide you gold and you can automate the collection of coins from colonies using the bank. Upgrade the bank to collect more and increase the capacity. Also, see – Best Android games under 50MB

After the battle starts, you send your soldiers to invade the enemies. As mentioned above, your general has three passive skills, you have to use them to slay down the enemies. And you should use these skills at the right time; don’t use skills to defeat low-level waves, use when you see your soldiers are having problems in slaying down enemies. Using skills at the right time increases the chances of getting the victory in Game of Warriors. Also, see – Best Android games under 100MB

Your soldiers perform a major role in both game modes; attack and defend. Upgrading the attributes of soldiers increases the damage, attack, and health. So upgrading is one of the important tasks in Game of Warriors.

So these are some Game Of Warriors tips, cheats, and a helpful guide for beginners. It is a fun offline strategy game for Android and you should give it a shot. Download Game of Warriors – here(Google Play Store). Also, see – Top new Android games today