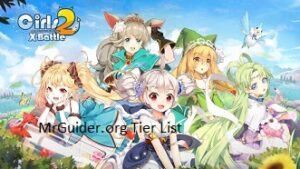 Let’s have a look at our Girls X Battle 2 tier list and build the best Girls team to strike down the enemies in the campaign, league, guild boss battle modes

Before you dive into this Girls X Battle 2 tier list; don’t get confused in the top tier list. We all start with the 2-star, 3-star, 4-star Girls characters in the game. As you progress through the game, you will get top tier units. All you need to do is audit the list of Girls characters you have and see their tier in this Girls X Battle 2 Tier list. Depending on your progress or the Girl characters you have, you will have to build the team. For example; suppose, you don’t have tier 1 units, but you have tier 3 units. Then add those tier units in the team instead of low tier units. So let’s get started(SSS>SS>A+>A>B+>B>C+>C).

So these are the best girls/characters in Girls X Battle 2 Tier List 2020.

These are the good Girls/Characters – they are strong and can perform like SS-tier girls when you use them properly in the team.

Another set of good girls, characters – these girls are not bad – but not as strong as SS-tier girls. Use them based on their strength and in the right team to get the most out of their potential.

These are the average-type girls who can do well – but not as good as high-tier girls.

Another set of average-type girls. They are not good – also, not the worst. Just OK-type!

What Is Fairy, Ghost, Angel, Etc.?

All the characters in the game belong to one of these factions; Ghost, Human, Monster, Demon, Fairy, Angel. For example – Gambler is a ghost faction unit. Head to the Girls tab in the footer menu. It has two sub-tabs; Girls and Gallery. In the Girls tab, the game displays the characters that you have unlocked so far. And, In the gallery, it displays the list of all characters that you can filter by these factions. By deploying a certain number of characters from a particular faction, the player can activate the aura bonus. 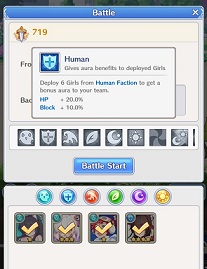 Before you initiate the battle, tap and hold down the faction/aura bonus icon to check the requirements. For example – Deploy 3 girls from ghost faction and 3 girls from fairy faction to activate Symbiosis aura bonus effect, which grants extra HP and attack power to the team.

How Do You Get Characters: –

For More Updates, Game News, Game Guides, New Game Releases, And ALERTS – Like Us On Facebook – MrGuider, Follow Us On Twitter – @techhuntr. Check Out – Best Mobile Games. Do You Have Any Suggestions? Submit Here