Get Started – SWAT and Zombies 2 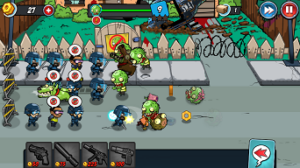 You can play SWAT and Zombies 2 game offline but to save progress, at the time of initializing, you need an active internet connection. In the game, the player assembles a team of fighters who fight against zombies. Your goal is to clean all zombies from everywhere. But it would not be easy because of powerful zombie gangs. Can you defeat the hoard of zombies? You have lots of guns, bombs, powerful equipment, and much more to slay down. 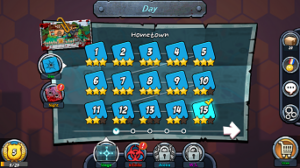 SWAT and Zombies 2 game features four game modes; stages, infinity, arena, and world sweeper mode. Stages are divided into five landscapes; hometown, street, mart, factory, and airport. If you play in the day mode, the number of zombies will be low as compared to when you play in the night mode. However, you should complete all stages in both modes to earn coins, stars, equipment parts, boxes, and much more.

In the infinite mode, you fight against endless hordes of zombies. You earn wooden boxes by defeating the waves of zombies. These boxes include valuable items such as coins, parts of the weapon, items for your members, stars, and much more. This mode is the toughest one among all in SWAT and Zombies 2 game.

In the arena mode, you battle against the other teams from all over the world in real-time. Internet connection is required. Last game mode is world sweeper mode/events, the best mode in SWAT and Zombies 2 game to earn rewards.

⇒ The game starts with a tutorial in which you learn about the basic of the game; how to place team members, how to replace them, upgrading of the weapon, how to equip, and more. Once the tutorial ends, the player manually takes care of all things.

Your goal in SWAT and Zombies 2 game is to clean zombies and defend your fence. The game is easy but getting three stars in every stage is difficult.

⇒ There is only one rule to get 3 stars in every game; don’t lose a single member of your team. If zombies eat one of your team members, then you would not get 3 stars. So try to save all members at every stage because stars are valuable.

⇒ If one of your team members’ health status is decreasing because of zombies’ attacks, replace him with another by taping on the arrow button.

Your activities when the fight starts!

As mentioned above, getting 3 stars in SWAT and Zombies 2 game is not an easy task. When the fight starts, you should keep an eye on coins, member’s health, zombies, coins in pocket, and much more. These are the activities you need to do; –

⇒ Remeber that you have limited coins, you should use these coins efficiently. For instance; you have 400 coins, you can place one fighter for 400 or place 8 fighters(50 coins for each). Use bomb when a large number of zombies attacking a single side.

The last wave is tremendous. Zombies are coming fast to you but you can easily defeat this wave if you have prepared your force early. At that time, throw the bomb on zombies, if they are coming from only one side, send your fighters(placed on other sides) back, you will get coins, buy bombs, powerful fighters to slay down all of them.

How-Tos for “SWAT and Zombies 2” game

How to get more coins when the battle starts? More coins mean you can place more members in less time.

How to collect stars?

How to upgrade a weapon?

Weapons can be upgraded to next level when you have the minimum number of parts. For example; to upgrade MSK gun to level 2, you must have 2 parts. You get these parts from wooden boxes.

How to equip a weapon/item?

Tap on one of your team members. Tap on the + button, choose an equipment if available.

1 thought on “SWAT and Zombies 2 Overview, Guide, Tips, And Cheats”