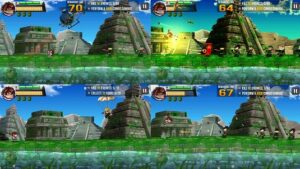 One of the most entertaining game’s sequel “Ramboat 2” has been just released for Android on Google Play Store by Genera Games. Here’s all you need to know about Ramboat 2; overview, guide, tips, and tricks for Ramboat 2

Ramboat 2 is a platformer shooting game for Android by Genera Games. The original version of the game crossed million of downloads on Google Play Store. Genera Games, the team behind Ramboat game is now back with the sequel. Ramboat 2 continues your fun with amazing new features, missions, guns, and weapons. Ramboat 2 is not an easy game, the game features challenging missions, it would not be easy to get three stars in hard missions where you have to keep an eye on many things. Let’s take a look at all the things of Ramboat 2. 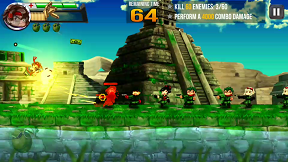 Like every Android game, Ramboat 2 also starts with a tutorial in which you learn about the basic functionality of the game; how to play, controls, upgrading, and more. Once the tutorial ends, you can manually take care of all things as you want. In the game, you play as a soldier and complete stages by defeating the waves of enemies. You just have to control your character; dodge enemies’ attacks, shoot down enemies by jumping, running fast, and rolling on the ground. It’s a great fun jumping shooter game. Ramboat features lots of guns, weapons, soldier customization, many types of enemies, and much more. If you are a beginner and not getting three stars or having a little bit confused about gears/guns/weapons/rewards, then read the guide, tips, tricks, and cheats for Ramboat 2 – Soldier Shooting Game. Also, see – Best Action games for Android of 2018

Controls are very simple; you just swipe up to jump, swipe down to roll, swipe left to go back, swipe right to move right side, hold your finger on the screen to move fast. At the left bottom of the screen, tap on the weapon to slay down enemies; grenade. Your character shoots automatically, you just have to navigate him in the right direction. Also, see – Top best offline games for Android

Before you start the mission in Ramboat 2, take a look at the objectives that you have to achieve. Cost of playing a mission is energy points. You have limited energy points, so try to complete all objectives in a single turn. Your enemies will also attack you with bullets, rocket launchers, bombs etc. Keep an eye on all of them and dodge by jumping, moving fast, and running. If you lose your all health points, then you will have to restart the mission. You can easily dodge their attacks if you control your character perfectly. Also, see – Top best arcade games for Android of 2018

Ramboat 2 features loads of guns; AK-47, Mac 10, Super Shorty, Uzi, HK 63, Beretta 1200FP, and more. However, initially, most of them are locked. To unlock new guns in Ramboat 2, you need blueprints. Blueprints can be collected by getting victories in stages. Also, see – Best platform games for Android

The levels become more challenging as you progress in the game. Upgrade your guns to increase damage, power, and fire rate. To upgrade guns, you need blueprints, which can be collected by completing mission objectives. Also, see – Top best Pokemon games for Android of 2018

To unlock additional game features; blackmarket, warehouse, and special missions, you have to level-up your profile. To level-up, you need XPs, XPs can be earned by accomplishing objectives. Also, see – Top new Android games

Ramboat 2 is a challenging game for Android, these tips, tricks, and cheats will help you to complete all the missions like a pro and also unlock new items without spending real money.

As mentioned above, you need XPs to level-up, blueprints to unlock and upgrade guns. So, one of the best ways to earn more is by getting three stars at every stage. You will get the reward if you complete objectives. For example; you complete two objectives out of three, then you will be rewarded only for the accomplished objectives. So try to complete all objectives in a single turn at every stage to get more rewards. Also, see – Top best survival games for Android

Upgrade guns to increase your power. You will be able to defeat the waves of enemies and the boss if you have a powerful gun.

In Ramboat 2, after entering the battle, you might get a booster(health point, grenade) after slaying down one or two waves of enemies. Keep an eye everywhere and grab the booster. It will help you in completing the objectives. Also, see – Best 3D games for Android

In Ramboat 2, Blueprints are important, right? These blueprints can be earned by getting victories and by opening crates. Head to the crate section of Ramboat 2, claim your free crate, watch the video ad to open more crates for free, without spending real money.

So this is the beginner guide and some helpful tips and tricks for Ramboat 2. Also, see – Top new Android Games today

Ramboat 2, the sequel to one of the most popular platform games is really great and addictive. If you love fast-paced platformer games, then you should give it a shot. Download Ramboat 2 – here(Google Play Store). Also, see – Best Android games above 1 GB

2 thoughts on “Ramboat 2 By Genera Games, Tips, Tricks, And Cheats”