Like Knights, Heirs also have these stats; Military, Scholastics, Politics, and Charisma. We would recommend you to read the Knights guide here to know more about these stats. You can increase these stats by training or raising the Heir level. As the level increases, stats will also increase and you will get more bonuses in grain/gold/soldiers/military(influence). Once the Heir reaches maximum level or adulthood stage, you can let him/her marry with another player’s Heir. You will get the stat bonuses from their partner. So that’s the basics of The Royal Affairs Heirs mechanics. Let’s learn more about The Royal Affairs Heirs; How to get an Heir, let him/her marry, and about their stats.

The Royal Affairs – How To Get Heirs? 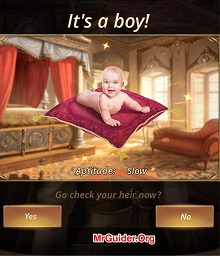 Consorts produce heirs randomly when you visit them. There are two ways to do that; you can either summon or visit manually. On the main screen of the game, tap the castle -> head to the consorts -> at the bottom-right corner, tap the summon any button to visit. In the summon methods, there are low chances of getting an Heir.

Manual Visit ⇒ Go to the consorts menu -> tap on a consort -> tap the visit button. This manual meeting will cost you gems. In this method, there are high chances of getting an heir.

We have already discussed the stats; Military, Scholastics, Politics, Charisma in the Knights guide. Make sure to check that post. Go to the heirs menu -> select an heir -> there you can check his/her main focus stats, mother name, and intimacy. If you increase the intimacy stats of her/his mother, then his/her stats will increase.

Once an heir reaches adulthood or maximum level, you can let him/her marry with another player’s heir. All you need to do is go to the castle -> tap the marry option -> there you have two options; marry or propose. Tap the marry button to randomly pick the partner and let the heir marry. Tap the propose button -> you can go for the open proposal or private proposal. In the open proposal, any random player can let his/her heir accept that proposal. In the private proposal, you can select a particular heir. You need the player ID. For example; if you want to let an heir marry with your friend’s or union member’s heir, you can put his/her ID. Players can find their ID in the profile menu. Tap the profile avatar at the top-left corner of the screen. On the bottom-left side, you can check the ID.

So this is The Royal Affairs Heirs guide for the beginners. Also, see –