The 10 players battle each other for the top ranks in Zero City: Zombie Shelter Survival game’s arena mode. The players who top the arena leaderboard get better rewards in comparison to the players who failed to score well. The arena mode is pretty fun. If you are having trouble understanding how things work in Zero City Arena mode, then you are in the right place. In today’s Zero City: Zombie Shelter Survival Arena guide, we have shared all the details – arena rankings, arena stores, and the arena chips. Let’s get started!

You will be matched with (9) random players in the arena mode.

Before you participate in the arena, you can check the rewards: – 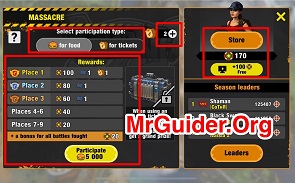 Usually, the top (3) players get the chest, arena tickets, and loads of arena chips as a reward. Even if you rank at the bottom, you will get a small reward.

In each stage, you get a certain amount of time to choose an opponent. At the top-right corner of the screen, you can keep an eye on the stage as well as next round time. At the end of a stage, the rankings in the leaderboard get refreshed.

Tap the opponent and you can see the number of ranking points that you can earn by beating that opponent. 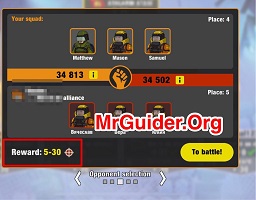 Zero City Best Team – We would recommend you to build two ranged units and one melee unit. The melee unit – Equip him/her the best melee weapon, best armor(which give the best health and defense stat) – because melee units fight within a close range and protect the back-end units(ranged).

How To Get Arena Tickets In Zero City: –

Daily Mission Crate – Complete all the daily missions to get the uncommon mission crate. This crate gives 1-3 arena tickets.

Arena Mode – Sometimes, even if you pay the food as a participation cost, you get the arena ticket reward upon ranking the #1 in the leaderboard.

Crowds of Zombies – Go to the map -> tap the red skull button on the bottom-left side -> show -> clear all the crowds of zombies for free arena tickets.

So that would be all in our Zero City Arena guide for the beginners. Also, see –