If you have just started playing the AFK Arena game, then this beginner-friendly AFK Arena guide will help understand the core aspects of the game!

AFK Arena is a great Idle RPG for Android and iOS by Lilith Games, the publisher of Rise Of Kingdoms game. In the game, you will set up a team of heroes to fight the monsters in a wide range of locations. There are loads of game modes to play; the campaign mode, PvP Arena, Arcane Labyrinth, King’s Tower, and more. All you have to do is select the heroes wisely and position them on the basis of their strength & role. They will attack the foes automatically, while you have control over their powerful ultimate skills. If you have just started playing AFK Arena, then our today’s post on AFK Arena guide and AFK Arena tips, cheats & strategies will help you in passing every stage.

⇒Figuring Out The Best Ones

Well, there are loads of heroes in the AFK arena and you don’t have to focus on all the heroes that you get through the summon feature. This feature unlocks once you clear a certain number of stages in the campaign mode. As you progress through the campaign battles, things will get worse and you will need powerful heroes to pass the difficult stage. So it’s important to focus on the best heroes from the very beginning. Now, what are the heroes who can get you out through these stages? You don’t need to figure out it by yourself as we have made it easy for you. All you need to do is⇒ read this AFK tier list.

The next thing that you need to know is the heroes’ stats, skills & their role. You can figure out the hero’s role by reading his/her skills, stats. Go to the heroes -> tap on the hero to read about it -> skills -> tap the skill.

You can take help of the tier list, which we posted yesterday(the link is given in the first paragraph). Once you figure out the heroes; their strength, role, skills, etc., it’s time to build the best AFK Arena team.

Building a balanced team in a game like AFK Arena is really important as it can change the outcome of a battle. Even if you have the most powerful AFK Arena heroes, you should focus on the team combination and the character position. These small things matter a lot. As you know, you can deploy a team of five heroes in the battle; the two heroes in the frontline and the three heroes in the backline. The battlefield looks like this: –

⇒Now, the first two heroes in the frontline should be of a tank role; the units with the best HP/Defense and defensive/shield skills. These guys are the first ones who get the attack. Their protection shield, high HP, defense, agility stats increase survivability. And, both these units give a shield to the backline characters.

That’s the ideal team combination in the AFK Arena game. You can experiment with heroes combination and their positions if you are getting stuck on a stage.

From the campaign battles, you can earn player EXP(to raise the player level), hero EXP(to raise hero level
), and the gold coins. In the battle, the selected team members attack the enemies automatically. And, as mentioned before, you have control over their skills. At the bottom of the hero icon, you can check the HP(the green bar) and the rage(the orange). As the battle progresses, the rage will build up and at the maximum point of the bar, you will be able to unleash the hero’s skills.

On the victory page, tap the stats/details icon at the bottom-right to check the damage taken, damage dealt, and the healing performance of heroes. The battle statistics will help you in figuring out the best DPS, tank, healer heroes. 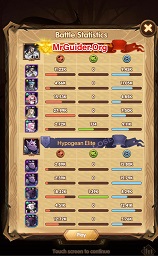 The Idle battle – On the campaign mode screen, the heroes fight the enemies over time. You can claim the rewards from this Idle battle; tap the golden chest to claim loads of precious rewards such as gold coins, EXP, player EXP, gears, and more.

To pass the difficult stages, you will need to increase the stats of heroes in AFK Arena. And, there are many ways to do so: –

1.) Level Up – Spend the gold coins, EXP to raise the heroes. At certain levels, new skills will get unlocked and the hero will shine in the combat

3.) Ascend the heroes – Go to the castle -> tap the temple of ascension building -> here you can ascend the heroes. Tap the hero that you want to ascend -> then tap on the next slot and read the hero requirement. Usually, you need to use duplicate heroes in this process.

Make sure to don’t waste the resources on all the heroes that you have. Always develop the best ones.

Go to the castle area – Rickety Cart – at the bottom; choose reset or retire -> reset; resetting the hero will return all the resources(hero’s essence, hero EXP, gears, gold, etc) that you used in raising his/her level. Retire – You can retire the common type of heroes and get back all the resources, experience.

So that would be all in our AFK Arena guide for beginners. We will post an advanced guide soon. Let’s have a look at our top AFK Arena tips, cheats & strategies for beginners!

1.) Build And Develop The Best Team

This part will be covering all the tips mentioned in the guide above. The very first one is to build the best team of heroes. Read this tier list and figure out the best characters that you have owned. After it, focus on raising their power through various ways such as leveling up, ascending, etc. Use all those diamonds in summoning and try the luck. If you have developed useless or low-grade characters, you can reset/retire him/her and get all the investment back.

The next thing is to add all types of heroes; tanks, DPS, healers/buffers. Place the tanks in the front line and the rest ones in the back row.

Other than the campaign mode, you can earn precious rewards in other game modes as well. Make sure to play every kind of game mode daily; guild battles, bounty board, arcane labyrinth, king’s tower, and more. You can earn gears, hero essence, EXP, in-game items, diamonds, and much more.

Go to the campaign mode screen and tap the quests button at the upper-right corner -> complete the daily tasks for the rewards such as diamonds, scrolls, soul stones, and more. The weekly quests are also worth completing. So don’t miss any quest and grab all the rewards.

Join an active guild and participate in the team hunting battles. You can earn guild coins, gears, diamonds, and many more rewards from it. Spend those guild coins in the guild store for other precious items.

Tap the gift set option at the upper-left corner of the game screen -> gift sets -> claim free diamonds and soulstones daily. Once you have enough soulstones, you can combine them and summon a hero. You can combine it in the bag menu.

So that’s all for now in this AFK Arena Guide. We will add more tips & strategies soon. If you have more AFK Arena tips, share in the comment below!