Tilting Point, the publisher of one of the best horse racing games, has just released a brand new MMORTS for mobile, named as Warhammer: Chaos & Conquest. In the game, you will have your own chaos fortress where you train the military units, produce resources, and manage all kinds of strategies including attacking as well as defense. Well, the concept of the game is pretty cool; grow the chaos fortress by upgrading all the structures, training military units, raising warlords level, and there are many more ways. The game offers a whole world map where you can gather the resources, find & attack the foes(PvE), raid the enemy fortress(PvP). Also, you can be a member of the alliance and help other members. In today’s Warhammer: Chaos & Conquest guide and Warhammer: Chaos & Conquest tips, cheats & strategies post, we have covered every basic aspect of the game.

The Basics – Champion, Base, Troops, And More

In your chaos fortress, chaos keep is the main building. Without raising its level, one can not build or upgrade other buildings in the fortress. Upgrading it allows the player to construct more structures and expand the fortress and influence. Additionally, you can not upgrade other structures beyond its level. For example; If the chaos fortress level is 7, then you can not upgrade lumber mill to level 8. Keep all the buildings level matched with the chaos keep building. Now, let’s learn the basics(Power, How to play, attack, defend): –

Warhammer: Chaos & Conquest is similar to other games such as Rise of Kingdoms, Rise of Empire, etc. The top basic things in all these games are; build & upgrade the structures, increase the power, attack foes, gather resources, study rituals, protect RSS/buildings from other players, raid other players, and maintain the power(you may lose the power too). Let’s learn in details: –

At the top of the game screen, below the player avatar, you can check the current fortress power. There are many ways to increase the fortress power: –

At the bottom-left corner, tap the world map button to visit the world map. If you are playing this type of game for the first time, then you may have some questions. In this part, we will try to cover all these: –

Once you are on the world map screen, tap the chaos wastes button at the bottom(displayed as magnifying glass/search icon) -> here you can search armies, foes, RSS by level. Tap the drop-down button next to find a button to search the desired thing and choose a level -> hit the search button and the game will filter out the same result. Hit the Go button to visit that place.

You can gather a number of resources from the world map: –

You will need millions of amount of RSS as you progress through the game. Build & upgrade the production structures outside the fortress wall to produce these resources; blast furnace produces lead, lumber mill produces wood, the quarry produces stones, slaughter pens produce food. To increase the amount of storage, build & upgrade the warehouse. The warehouse in Warhammer: Choas & Conquest game also protects a certain amount of RSS from being looted by other players in the raid.

In an attack rally, you can add the military units trained in the training ground, bestiary + champion and a warlord. The collective power of all these; units, champion, the warlord is considered as the total march power. When you select an enemy on the map and hit the battle button, you will be able to select the units, add champion and warlord. On the same screen, you can check the total march capacity, troop load, and power.

March Capacity ->  You can send a certain number of troops in a march. To increase the march capacity, upgrade the chaos keep, warlord conclave.

Troop Load -> If you are going to loot other player fortress or gather RSS from one of the RSS points on the world map – your troops can hold a certain amount of RSS – it’s called troop load. Your troops cannot exceed this load limit. So if you want to loot more from the RSS points, fortress points, you will need to increase the troop load. Add more units in the march to increase troop load or choose the right type of warlord.

Champion in the march can increase the troop load, power, and march capacity. The higher the level, the better will be the buffs. In this part, we will learn about the champion – how to raise the champion level and its power.

Champion Level – To raise the champion, you need Champion XP. You can obtain champion XP from the foe battles(attack foe on the world map to earn champion XP) or upgrade/build the structure in the fortress or study in sorcerer’s citadel. At the upper-left corner, tap the champion button -> there you can check the XP amount.

As you upgrade the champion, you will earn skills. Go back to the champion profile -> skills -> there you can spend the skill points for buffs.

Increasing Power – You can further increase the power of the champion by equipping the gears; helmet, chest plate, hands,  weapon, legs, and relic. You can craft all these gears in daemonic forge building. To quickly access this building -> tap on the empty gear slot in champion profile -> go to daemonic forge.

Defeat the foes to get the crafting material.

Tap the warlord button at the bottom -> here you can see all the warlords that you have obtained so far in Warhammer: Chaos & Conquest game. You can recruit more by spending wrap stones. Level Up – To level up warlord, you need warlord honour. Complete the chapters(Quests) to get warlord honour.

Rank Up – To rank up warlords, you need soul fragment. Participate in the events to obtain.

Every day you get prestige points. You can use these points to raise the prestige level. At the top of the screen, tap the prestige button(near player avatar – right side). Level up prestige to get more bonuses.

1.) Watch The Video Ad For Warpstones

At the upper-right corner of the game screen, tap the green color gem button(Warpstone) -> offers screen -> go to Warpstone button -> watch the video -> claim 20 Warpstones. Warpstone is the premium in-game currency; if you want more, participate in the events or collect from the Warpstone tiles, which appear on the world map during the random event.

At the top-left side, tap the hourglass timer icon -> complete the daily trails to get Warpstones, speed-ups, and the chest. From the solo trials, you can earn loads of amount of RSS. Alliance trials – Complete these missions to earn RSS as well as alliance points.

4.) Gather The RSS From The World Map

Before you go offline in the game, make sure to send the army units on the march to collect the RSS. Also, choose the right type of Warlord who have march load buffs. You can check the Warlord buffs in their profile.

At the bottom of the screen, above the globe button, you can see the recommended quests. Tap the avatar next to it to check all types of quests; focus on completing these quests to earn precious items in no time.

Go to the offers menu -> bundle tab -> there you can claim a free chaos chest every six hours.

8.) Participate In The Events 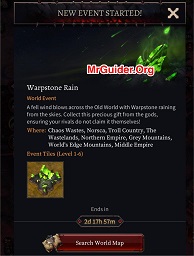 Some exclusive items can be grabbed in the events. So it’s important to participate in the events. On the right side of the screen, tap the event challenge button(displayed with the timer).

So these are some Warhammer: Chaos & Conquest tips for the beginners. If you have more tips to share, feel free to comment below 🙂