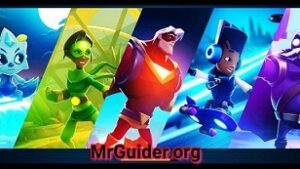 Kongregate has recently released a new RPG for mobile devices “BattleHand Heroes”. The original version of this game series was released in 2016. The newest entry(Battlehand Heroes) comes with Super Hero characters, new skills, cards, enemies, and amazing environments. In this post, we have covered everything about the game you need to know; Battlehand Heroes guide and Battlehand Heroes tips, cheats & strategy.

Battlehand Heroes – Get Started – The Basic 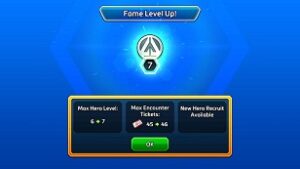 Before we dive in to guide, tips, cheats, let’s learn the basic of the game. Battlehand Heroes game features many game modes; adventure/crime city, Arena/Stadium, and Titan Tower. You start the game from adventure mode, rest modes are locked at the beginning of the game. And at the beginning of the game, you have only one hero “Mr. Sunshine”. Rest four heroes are; Cloud9, Kitty Karma, Pixel, and Holoman. You can recruit these heroes once you reach level 7(except Kitty Karma, because this character gets unlocked at fame level 2-3).

The adventure mode has three sub-modes; normal, elite, and heroic. Heroic mode is one of the difficulty modes and to win battles in Heroic mode, you have to increase the power of your heroes, card effect, and talents’ stats.

You can play elite & heroic mode once you complete normal stages.

In the stadium mode, you battle against other players’ team for trophies. You can select 2 heroes for the battle. If you win, you get trophies and chest reward. These chests contain rewards such as diamonds, heroic orbs, and bucks.

You can use heroic orbs to unlock talents of a hero or to upgrade or increase the stats of talents. Win trophies, climb up[high rank] and increase the number of rewards.

In this part, we will learn about characters, cards, raid, alliance, stadium, superpowers, battles, enemies, elements, and much more.

Among all these characters, Mr. Sunshine and Holoman are the best ones to add to your team. Why? Because of cards stats, HP stats. Holoman is probably the best. 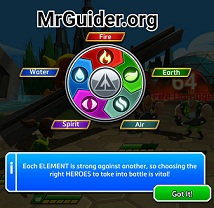 Each character has a unique element. For instance, Mr. Sunshine – Fire element. You can take elemental advantage by choosing a right target. Here’s how: – 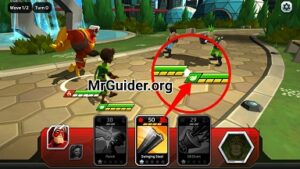 In Battlehand Heroes game, each character has own unique deck of cards; shield cards, HP recovery cards, attack cards. You use these cards in the battle to strike down the monsters. Make sure to balance the deck: –

To increase the impact of your cards, you can upgrade it or increase its level. For instance, you have a card that deals 90 damage. To increase the damage power, you can upgrade it using bucks, boosters. Keep note that you can not level up a card beyond character’s level. For instance, your character’s level is 1. You can not level-up a card to level 2. You have to level-up the character first.

Evolving -> To add a star to the cards(from 1 star to 2 stars), you need duplicate cards. Once you have enough, you can evolve it.

How to level-up a character?

You need character EXP(Experience Points). The easiest way to level up fast in Battlehand Heroes game is playing adventure mode levels again and again. Make sure to select those characters whom you want to level up.

Another way to level-up a character is using bucks. But don’t waste your bucks in this task. Just play adventure mode levels again and again and obtain Hero EXP.

Card Perks? What is it? These perks get activated in the battle when you use a card. For instance, critical hit, slow, and more. To check the perks, go to character’s info panel -> cards -> tap on a card -> details -> perks. You can upgrade the perks using the fusion. And for fusion, you need cells. The player can obtain cells by playing Titan Tower mode(it unlocks at fame level 8).

In adventure mode, you can use raid tickets. By using raid tickets, you can claim rewards; bucks, hero XP, fame XP instantly. But you can use these tickets only on three-star stages. So, try to obtain three stars at every stage and then use raid tickets. Instant reward costs you double normal tickets(re-generates after every certain amount of time) and 1 raid ticket(obtain it by getting victories in the battles).

In Battlehand Heroes game, before the battle starts, you have to choose your best heroes. Then just deploy cards and strike down the enemies. After a certain amount of turns(10), you can use superpower of a hero by tapping on the superpower icon. To get three-stars at every stage, you have to complete the mission in fewer turns and without any casualty.

1.) Increase the stats of heroes

Go to hero’s info panel -> cards. Compare cards with each other and add only best cards to your deck. How to compare or build the best deck: –

You can add up to 6 cards to your deck. And you have to select the best ones. So, don’t waste your boosters in upgrading useless cards. Upgrade only best cards.

4.) Use Superpower at the right time

After a certain amount of turns, the superpower of characters gets unlocked. All you need to do is tap on the superpower icon. But make sure to use it in the right situation. Don’t use it early.

Using elemental advantage, you can deal more damage to an enemy. Read the elemental guide above to know more about elements of a character.

Go to the shop -> claim free crates. You can open mini-crates for free after a certain amount of time. And to reduce the time, tap on the crate and watch the video ad.

To reset -> Clear the game data and open the game again.

So, these are some Battlehand Heroes cheats, tips & a strategy guide for the beginners. Also, see – Best strategy games for Android