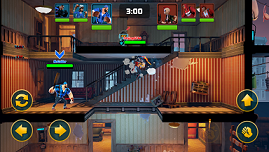 Metal Fist is a new fighting game by Vivid games in which you play as a fighter and defeat the opponent by punching and using weapons. Here are some Metal Fist tips, cheats to fight like a pro and a useful guide for beginners to easily play Metal Fist

Metal Fist, a new multiplayer fighting game with lots of fighters, weapons, and game modes has finally arrived for mobile devices and lets you enjoy the best fighting experience on your mobile device. The game features solo mode also in which you fight against bad guys and after some rounds, you have to defeat the boss. Metal Fist features a variety of game modes; 1vs1, free-for-all, tag battles. Let’s take a look at Metal Fist game tips, cheats, a beginner’s guide. 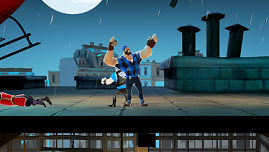 In this part, I have explained a brief detail about the game; leveling up, chests, upgrading heroes, weapons, game modes, controls and more. Let’s get started: –

As mentioned above, Metal Fish game features lots of heroes and fighters. There’s no shortage of characters in this game, you have many choices. Yes! most of them are locked at the beginning of the game. You can unlock them using the hero cards. Also, see – Best offline games for Android

In Metal Fist, all the characters have special attacks and skills. The player uses these special skills and attacks of heroes on the battlefield to slay down the opponent. To use these skills & special attacks, you should know about the controls. Also, see – Top new best arcade games for Android

It features two types of controls; buttons and D-Pad. By default, it is set to buttons. You can change it to D-Pad under options. Just check the box next to D-Pad. D-Pad controller is much effective than buttons because you don’t need to release finger frequently to navigate the fighter. Using D-Pad, you just hold your finger on the screen and navigate your hero. Also, see – Top best Pokemon games for Android

At the right side; jumping, attack, and skill options are provided. You just tap on the attack button to attack, use skill button to perform a passive skill, and use the jump button to dodge enemy attacks or as you want.

The chest is another useful item in Metal Fist game. There are a number of ways to get chests in Metal Fist; level-up your profile, defeat the boss in boss fights, by getting victories in the multiplayer modes.

XPs are required to level-up the player’s profile. XPs can be acquired by playing battles in solo mode or in the multiplayer mode. One of the main advantages of leveling up is you get the free chest in Metal Fist game. Also, see – Top new best Android games 2018 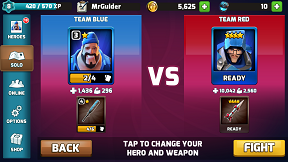 Before you start the battle, you have to choose your best hero. You can easily identify your best hero by comparing each other’s attributes. Similarly, check the weapons that you have unlocked and choose the best. Head to the heroes section -> hero -> note his/her attributes(damage, power) -> compare.

There are two ways to get the victory in Metal Fist game; defeat the opponent or save HP. There is a fixed time duration of each match. If both the players fail to defeat, then the player who has more HP at the end wins. So HP is important and you should save it. Dodge opponent attacks and save your health points. Also, see – Top new best Android games under 50MB

What about to don’t give any chance to your opponent? It’s a great technique to win every match in Metal Fist. It does not matter who is your opponent. After the battle starts, try to perform a first strike. If you have done it, you will be able to perform combos. Because, after getting hurt, the fighter takes a few moment to wake up!

The one more features which make the Metal Fist a great game is its hidden traps and boosters. On each battlefield, there might be a trap or an HP booster. Just check every corner, up, down to find out them. Take a look at the below screenshot of Metal Fist, there is a lever. Press it and see the magic. 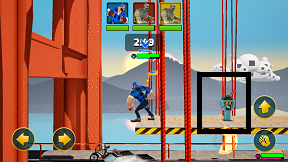 There might be an HP booster too, grab it before your opponent and it will come back after a few time. Also, see – Best Idle games for Android

6.) Use Traps, Skills, Boosters at the right time!

The best way to easily get victories in Metal Fist is attacking timings, skill usage timings, traps & booster usage. Use skills at the right time, use traps & boosters effectively. For instance, an HP booster heals your health, break the cage before your opponent.

The chest is one of the rare items in Metal Fist, there are number of ways to get chests for free; level-up your profile, go to shop section and unlock default free chests, watch video ad to unlock more chest, defeat boss in boss fight.

8.) Increase The Power Of Your Hero

You hero in Metal Fist Fighting game should be strong. You can increase the power of your heroes by upgrading them and equip them powerful weapons instead of low-level. Use weapons having special attacks. Also, see – Best Android games above 1 GB

So these are the Metal Fist tips, cheats, and tricks to get more victories in every kind of battle; 1v1, free for all, and tag battles. The Metal Fist guide is also useful if you are playing it for the first time. Download Metal Fist game – here(Google Play Store). Also, see – Top new Android games today