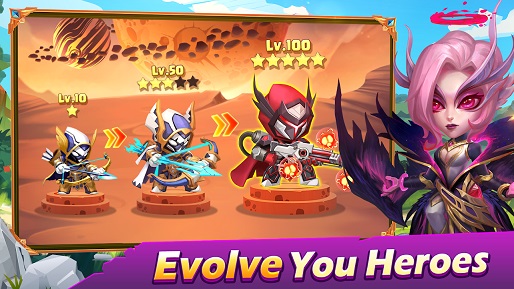 In this TapTap Heroes guide, you will learn how to play this game, about heroes, game content, and other aspects such as progression, tips on getting stronger, what to do when you are stuck, team building, and much more. So let’s not waste any time and check out the main content: –

Get Started With The TapTap Heroes Basics⇓

TapTap Heroes game features PvE as well as PvP content. When you start the game, you will play the PvE Campaign mode that features a ton of stages classified into different-different chapters or worlds; each next with more daunting difficulty. The PvE campaign mode gives you idle rewards such as coins and hero upgrade material. The more you progress or clear stages, the better the rewards you get. The max idle time is X8 Hours. On the main battle screen, you will see the heroes fighting enemies on AFK mode, after clearing a set number of stages, you will fight the boss.

You will make progress only if you defeat the boss, otherwise, you will just get stuck.

At the bottom of the game scene, navigate to the castle tab and you will see a lot of new functions; game modes, shops, tavern, heroes, etc. In this part, we will explain everything: –

Hero Chest: Here you can claim a free hero chest or spend the keys to get ’em. These chests contain hero shards. Tap the (i) symbol over the chest banner to see the drop rate

Hero Fusion: Here you can fuse the heroes; a set number of heroes fusion can grant you a higher-grade hero. Also, you can covert the heroes in this facility.

Fortune Wheel: Here you can spend wheel coins and get rewards

Den of Secrets: Battle enemies; each next battle with more difficulty and high-quality rewards.

Tavern: Dispatch heroes to get rewards.

Expedition: Earn feathers and currency from the expedition.

Get The Faction Advantage In Battles⇓

Heroes in TapTap Heroes game belong to one of these factions and have an advantage over each other based on the faction relationship and can inflict addition damage and accurate shots: –

Learn About The Classes Of TapTap Heroes⇓

In TapTap Heroes, characters have been classified into classes. Go to the heroes tab, tap on a herp, and at the top, below its name, you can check its class.

How To Unlock New Heroes?

You need hero fragments to unlock a hero. Once you have enough shards/fragments of a specific hero, go to the bag tab -> shards -> tap on the hero and confirm unlock. How to get hero fragments in TapTap Heroes? There are many ways to obtain hero fragments/shards;

You can also summon new heroes. Go to the castle tab -> hero chest. There are three types of summoning features;

How To Level Up Heroes In TapTap Heroes?

Experience points(EXP) are required to level up. You earn EXP by defeating the waves of enemies or in the boss battles or through other game modes. As stated above, your heroes automatically fight in the game. Once you defeat a set of waves, you have to defeat the boss in the boss battle to move to the next stage. As you clear more stages, you earn more coins, EXP, purple souls per second. Open the loot chest on the battle screen to claim the rewards.

There are lots of game modes. But locked at the beginning of the game. Let’s learn about these modes;

Equipment increases the attack power and defense power of a hero. Go to the hero info -> head to the equip tab -> tap on the auto button to equip the strongest equipment.

Go to the castle tab -> blacksmith -> tap on an item you want to forge -> hit the forge button. Note; only equipment in the bag can be used for forging(excluding equipped by the heroes).

Get Started – The Basic TapTap Heroes

As usual, TapTap Heroes game starts with a tutorial in which you learn about the basic mechanics of the game; how to play TapTap heroes, about upgrades, equipment, breakdown, souls, and much more. After the tutorial, the player has to manually take care of all kinds of activities.

Now, let’s start the TapTap Heroes guide and learn everything about the game.

Most of the features such as quests, arena, miracle tree, and more are locked at the beginning of the game. You need to level-up to unlock these locked features.

In this part, we will talk about the heroes; how to breakdown heroes, unlock new heroes, and much more.

How to sell or use the low-star heroes

If you have lots of heroes and you don’t want them. It would be better to use breakdown feature. Using it, you can obtain golden souls, purple souls or other souls.

TatpTap Heroes Guide -> Go to the castle tab -> altar -> choose a hero you want to break down and then hit the breakdown button. You will get souls by breaking down a hero. Use these souls to upgrade the heroes.

A goblin arrives twice a day and by defeating the goblin, you could earn decent rewards; the huge amount of coins, golden souls, and much more. You just tap on the goblin to use the minion attack.

As you know, 10 hearts are required to summon a hero using friendship summon feature. You can earn hearts by adding friends to your friend list. If they accept the request, you will earn the heart. You can not add an unlimited number of friends, so, delete them from your list once you received the reward.

#4.) Increase the power of heroes

It is the basic task you have to take care of. Keep upgrading the hero’s stats; HP, attack power, defense by leveling up. To level-up, you need purple souls, can be obtained by defeating the enemies in battle. Go to the hero tab – select the hero – level up.

To unlock the new skills of a hero, you need to upgrade the tier level. Reach the certain level of a hero; 30, 40, and so on to promote it and for upgrading the tier level.

Go to the store -> watch the video ad and claim free gems. (Tap on the + icon next to gems to go to the store).

#9.) Redeem The Codes for Free Rewards

Gift Codes are often issued by the developers of the game on their community handles; FB, Twitter, Reddit, FB Group. With the gift codes, you can have a chance to get the premium currency for free. You can check the TapTap Heroes codes here(2021).

So, these are some TapTap heroes tips, guide, and tricks for the beginners. Download – Here(Google Play Store). Also, see – Best Idle games like this one