This is a beginner-friendly American Dad! Apocalypse Soon Tournament guide that covers all the basics aspect a rookie need to know

The tournament is a 15-player clash where the random players join the league and fight each other to gain most of the tournament score so that they can get the top rank in the tournament leaderboard. It has five stages – and, in each stage, you can choose any player as an opponent to earn the score points. The more points you earn, the high-rank you get. At the end of the fifth stage, based on the tournament score, your position will be declared. And, based on the position, you will get the reward. Let’s learn everything in the detail in this American Dad! Apocalypse Soon Tournament Guide for beginners.

In case, you don’t know: you can participate in the tournament by heading to the map -> tap Morning Mimosa building.

There are two ways to participate in the tournament: –

Depending on the participation type, you will get the rewards. For example; if you use the food, you can get a ticket if you reach the #1 rank in the tournament. While, upon using the ticket, with the same result(#1), you don’t get the ticket. So the rewards are different based on the type of participation you select.

Using the ticket, you can get more rewards – and, also have the chance to obtain the Royal Tournament Chest that contains tickets, bottled mimosas, epic items, and legendary items.

How to get Tournament Tickets?

Once you have selected the participation type, the game will match you with the other 14 players for the tournament. And, once all the players are matched, a tournament screen will pop out in a pyramid style. At the upper-right corner, you can check the stage number and tournament status.

Your goal is to get to the top place. On the participation type selection screen, you can check the rewards detail: –

On the tournament screen, you can see all the player profiles. On each player profile, you can check the reward: +30, +45, etc. Tap on any player profile -> opponent selection screen will pop-out where the game shows squad power, rewards(at the bottom-left corner), enemy info, etc.

If your squad power is more than the enemy’s squad and you think that your squad can easily get the victory, then head to the battle without any worry. Victory gives tournament score points, while the defeat pushes you back in the tournament rankings. 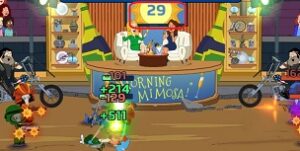 During the battle, the two judges in the background give tournament points. If you defeat the enemy squad in a short time and without any casualty, you can claim the maximum reward.

After the battle, wait for the next round; check the timer at the upper-right corner.

The same process continues until the fifth stage. Try getting more tournament score points on all the five stages – at the end of five stages, based on the player’s score, the position will be decided. And, based on the tournament rank/place/position, you will get the rewards.

After the first stage, the rewards number will change. Defeating the top-rank players will give you more tournament points(make sure to check the rewards first).

So this would be all in this American Dad! Apocalypse Soon Tournament Guide for beginners.