My.com.B.V., the publisher of Hustle Castle game, has just released a brand new RPG called American Dad Apocalypse Soon on iOS App Store and Android Google Play Store. If you have played the Hustle Castle or Zero City, Fallout Shelter, Westworld like games, then you will find American Dad Apocalypse Soon similar to them. In the game, you build an underground base where you can construct lots of rooms – and, in those rooms, you can produce the resources, train the clones/characters, and there are plenty of things to do.

⇒In the game, the characters are called Roger. You can have a certain number of Rogers or characters in the house. The maximum numbers of Rogers that you can have are displayed at the top-right corner of the base screen. We will learn how to get Rogers of high potential in the below part. You can get the Rogers using the cloning room or sometimes, they appear outside the house. You can let them in if you have enough room for them. To remove a Roger, you tap him/her -> then tap the options icon next to their name(three horizontal lines) -> kick out of the house.

⇒Now, how do you progress in the game? And, what to do after the tutorial ends?

There are two things that you have to do in American Dad Apocalypse Soon – build and upgrade the rooms in the house. And, build the team of fighters so that you can fight in PvE and PvP arena battles for the resources.

You can use the Rogers for the fight or production of the resources.

To build/upgrade/unlock the rooms, you need resources such as food, money, wood, uranium, etc. The player can produce these resources at house or loot from the battles.

The second main room in the house is called the Situation Room, which is just below the aforementioned room. Tap this room -> house editor -> now you can change the location of the rooms. However, if there is any issue going on, you would not be able to change the room – sometimes, weird characters invade the rooms. Look into all the rooms if you are getting this message and then send a Roger to that room so that you can get rid of that issue.

Upgrading the Situation Room unlocks the new rooms. So make sure to upgrade the situation room in the house.

There are lots of resources or in-game currencies that you need to build, upgrade the rooms in American Dad Apocalypse Soon game. For example – food. To produce food, you need a kitchen. And, to store food, you need food storage. Building and upgrading the storage for these resources increase the max limit that you can have in the house. As you progress through the game, you will need more resources for high-level upgrades. And, you must have enough space in the house for that much amount.

Or without using these options, tap on any room -> remove. Now, the room is in the inventory. Tap it from the bottom-center inventory and then choose a new location for it. Once you are all done, tap the save button at the upper-left corner.

The Rogers or Characters in American Dad Apocalypse Soon game belongs to these classes. Depending on their skills, they can help you. For example – fighters help you in the battles, cook help you in production of the food, banker help you fetch more money from the bank, and the list goes on.

Tap on the Roger – and, on the left side of his/her profile, you can check the class attributes. For example – A Roger excels in the production of the money in the mint because of the high attributes in the banker class. You can improve it further by training him/her in Banker Training Room.

So check the class attributes to figure out the best class for a Roger. For example – if he/she has more attribute points in the Fighter class, use him/her in the battles(place him/her in Roger’s Place room – train in the fighter training room). It’s up to you to use them perfectly.

Equipment or Gears are important – and, you should equip them wisely – based on Roger’s class. There are specific gears or equipment for each different class. For example – Cook’s Suit is good for Roger working in the Kitchen. For Fighters, you need the armors that increase health or provide fighting attributes. So make sure to equip the gears wisely.

There are three types of gears for a fighter class: –

At the bottom-left corner, tap the green color chest box to open the storage menu. There you tap a gear to check its detail. Read the details and equip them wisely to a perfect Roger. For example – when building a fighter, equip the gears that increase damage or health or provide buffs useful in the fight.

In American Dad Apocalypse Soon, you can craft weapons in the weapons workshop. The Weapons Workshop allows you to craft uncommon/rare/epic/legendary items. Depending on the quality of gear you want, you will need shards.

On the home screen, on the left side, tap the green color chest box to open the storage facility. In the storage facility, head to the gears tab; weapons, armor, jewelry -> tap on any item -> check the profile; there you can see the type of the weapon and quality of the item; uncommon, common, rare, epic, legendary, etc. Tap the break apart button to dismantle that item and get shards.

For example – if you dismantle the uncommon gear, you will get the green shard. And, green shards are required to craft rare items in the weapons workshop.

Among all these pets, Reginald Koala helps you in gathering resources, completing the training of Rogers when you are away. You can buy this pet in exchnage for golden turds.

As you clear the campaign mode stages, you will unlock the heroes; Steve, Hayley, Francine, etc. The heroes have special abilities – and, at the time of writing this post, you can not use their abilities because the function is locked. The developers may unlock this function in upcoming updates. So stay tuned. Also, see –

Save Golden Turds And Get One More Builder

The game gives one builder for free – so you can build or upgrade one building at a time. If you are going to play this game for a long time, we would recommend saving the golden turds and get one more builder at the cost of 750 Golden Turds. You can get golden turds from the chests or Ad-related Quest. At the upper-right corner of the house screen, tap the + button next to the builder’s helmet icon -> spend golden turds for one more builder.

Follow the campaign quests and complete the chapters for more rewards. On the left-center of the game screen, tap the mobile -> check the quests -> complete them for great rewards. After completing all the quests of a chapter, you will get a chest that contains money, food, uncommon or rare items, golden turds, etc.

Remove The Junk For Golden Turds

Golden Turd is the premium in-game currency in American Dad Apocalypse Soon game. You can get it for free by removing the junk. Look around the underground area – tap the objects stuck in the ground -> delete – remove.

Keep training the Rogers in the training rooms so that they can equip high-grade/level equipment. Depending on the potential(1-star, 2-stars, 3-stars, 4-stars, 5-stars), there would be a maximum training limit.

Send one female and one male Roger to the cloning room to get a baby of high potential – depending on the couple/parents’ potential.

Use The Rogers Wisely

Check their class attributes and use them according to that: –

Place them in their respective rooms – for example – cook in the kitchen, fighters in the roger’s place, bankers in the mint.

Upgrade The Rooms To The Same Level Of Situation Room

Situation Room is one of the main rooms in the house. And, without upgrading it, you can not upgrade other rooms – beyond its level. So make sure to upgrade all the rooms to the same level of the situation room. For example – if the situation room’s level is 4, then before you go for the next upgrade(level 5), upgrade all other rooms to level 4. This will make sure that you are getting the most out of all the rooms at the current stage.

Keep The Happiness At Max 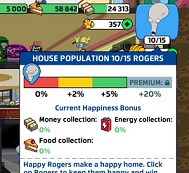 Tap the speech bubbles icon of the Rogers that appear from time to time to get happiness points. You can get a happiness bonus if you keep them happy. At the upper-right corner, tap the Roger icon to check the happiness level or bonus.

Loot Resources From Other Players’ Base

As you progress through the game, you will need more resources for upgrades – and, it would take a long time to collect this much amount from the production rooms. So we would recommend fighting or defeating other players for the resources; cash, wood, energy, etc.

Also, on the map, near the building, the game displays the number of enemy locations with a home icon. Enter any area -> tap the player spot -> scout -> attack. Defeat the enemies -> rob the resources -> earn trophies.

Participate In The Tournament

Tournament mode gives you bottled mimosas that you can exchange in the market for high-grade items. If you don’t know how to play or score better in American Dad Apocalypse Soon PvP tournament mode, then read this guide: –

As you know that other players can raid your house and loot the resources and you may lose the trophies if they get successful in attack. To increase the house defense, repair the arsenal room(the room after entrance gate); – once repaired – tap it -> arsenal -> there you can activate traps to knock off the opponents rogers; drones, mines, snipers’ post, etc. Also, you can upgrade these traps to increase their impact. For example – level 2 toxic drone inflicts 1350 damage where level 1 toxic drone inflicts 1200 damage. You can unlock new defense traps by upgrading the arsenal facility.

So these are some basic American Dad Apocalypse Soon tips & tricks for the beginners.