Dragon Storm is a new Action RPG for Android by Springcomes, the creators of brick breaker game. Here’s all you need to know about Dragon Storm game; tips, cheats, guide, and overview of Dragon Storm

Springcomes has recently released a new action RPG for Android on Google Play Store “Dragon Storm”. In Dragon Storm, the player slays down the monsters, fight against the boss, summon guardian spirit and complete stages. It is a great new offline RPG for Android with lots of fun and challenging stages. Let’s take a look at Dragon Storm game. 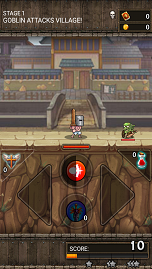 This small size game is really addictive and challenging. In the game, you play as a warrior and complete the stages by defeating monsters, boss. But the task is not simple, you can not get the victory without summoning guardian, upgrading equipment, and armor. It features two game modes; story mode and tower mode. In Story Mode, you complete stages and in the tower mode, slay down the monsters as many as you can. Tower mode is one of the difficulty modes in Dragon Storm game. There is also a PVP mode featured in Dragon Storm. Let’s start and read Dragon Storm tips, cheats, and guide. Also, see – Top new best Action games for Android

It features six characters and each character has own attributes; attack power, HP, skill attack. You start the game with Paul, the weak warrior.

In Dragon Storm, you can unlock these characters in exchange for diamonds, by completing missions or as a reward by the opening chest.

The initial levels of Dragon Storm are quite easy, but later it becomes too hard to clear stages. So you can not defeat the waves of enemies and monster alone, to get rid of this problem, you can summon a guardian. Head to the wing section and tap on summon option, continue the on-screen instructions and confirm a guardian purchase. It will cost you coins. After it, tap on the guardian and then equip(left or right). Also, see – Best Pokemon Games for Android 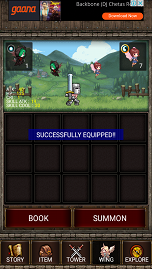 The game features challenging missions and you have limited currency and lives. If you lose your all lives, then you have to wait for the respawn. These tips and cheats will help you to clear all the stages without being hurt: –

In the game, you play as a weak hero and it is your responsibility to increase the power of your hero. Without increasing the power, you would not be able to get three stars and you can not even clear the stage. How to increase power?

In Dragon Storm, you will get three stars on the basis of damage you have done on the battleground. The best way to get three stars in each stage is to perform combos, use your warrior’s skill.

Before you start the battle, you can choose anyone of the add-ons; HP potion, shield burst, and destiny. You can get these add-ons in exchange for coins.

As mentioned above, you can not get the victory in next levels if you are going to fight alone. Summoning guardian benefits you in two ways; you can send guardian to collect gold or for the fight.

Gold is one of the valuable resources in Dragon storm, used in many tasks; upgrading, buying the add-on, for summoning. The best way to gather gold is sending your guardian to the expedition. Head to the explore section and unlock new places for more rewards.

Another way to get gold is playing the level again and again or play tower mode. Next way is to watch an ad and you will get jewels for free, later you can covert your jewels into coins. For 2500 coins, you have to pay 5 jewels.

Dragon Storm is a simple yet challenging game it is very addictive, the reason behind this is its simple gameplay, lots of stages, coins rarity. If you love simple offline Action RPGs, then you should give it a shot. Download Dragon Storm game – here(Google Play Store). Also, see – top new android games today