Garff is one of the fated characters in Exos Heroes game. Read on for Exos Heroes Garff guide and get to know about his skills and strengths 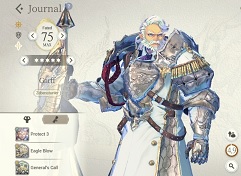 Garff is the best tank character in the Exos Heroes game. His base parameters; HP and DEF are better than any other tank-type characters – making him the most durable character in Exos Heroes. With active skills, Garff can inflict physical damage(AoE). And, with passive skills, Garff can share the health to ally, grant mana to front-row allies, and command mark to allies lower max health than self + increases health/defense.

The command mark, which is granted by Garff with passive skill, can be used to unleash Rudley’s full potential. Rudley requires command mark to grant barrier to self and ally.

There are lots of tank-role characters in Exos Heroes; Uloom, Xiakhan, Valarr, Mahar, Bernavas, Graff, and Shufraken. Garff is the best one among all these. He has got high HP and DEF stats with the amazing passive ability and two great DPS skills. If you have Garff, better develop him; he would not disappoint you.

So that’s all for now in this post on Exos Heroes Garff guide for beginners.