Rachel is one of the attack-role fated characters in Exos Heroes game. Read on for Exos Heroes Rachel guide and get to know about his skills and strengths 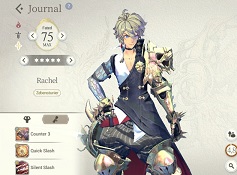 Rachel is one of the best characters with abilities to unleash massive single-enemy damage. His passive skill gives counter, grant mana to back-row allies, and mark enemy with “dishearten” effect. Enemies affected by this mark will suffer low defense and dodge. The other two active skills are Quick Splash and Silent Slash. With Quick Splash, Rachel inflicts a large volume of damage to a single enemy. With Silent Slash skill, Rachel does massive single-enemy damage; if the enemy dies, the skill increases allies’ attack and attack speed by a certain volume.

Rachel is one of the top-tier characters in the Exos Heroes game. The active skills do amazing damage + on the top of that, there is a change to activate the buff effect; improves attack speed and hit of all allies. The passive skill grants the “dishearten” effect, which can be useful for Baraka as well; Baraka will be able to steal mana from the target and grant it to ally – if the enemy is affected with disheartened effect.

So that’s all for now in this post on Exos Heroes Rachel guide for beginners.