[Update; the game has been out worldwide, please check the latest walkthrough guide, cheats, hints -> here]. Harry Potter Hogwarts Mystery is a new RPG for Android published by Jam City for Android. Two days ago they released the trailer for the game, now the game is officially available on Google Play Store. It’s a beta release, works fine for me. If the game is not available in your country, then you can download the APK file of the game from APKPure or wait for the official release in your country.

You start the game by choosing gender; witch or wizard are the two options you can choose. After it, you can customize your character or skip customizing. Once done, the game starts with a tutorial in which you learn about the basic of Harry Potter Hogwarts Mystery game; how to use the wand, interact with people, change the scene, and much more. After it, the player manually manages all the things.

What you have to do in the game? 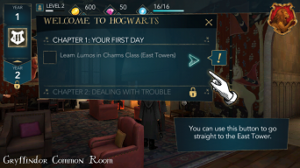 The player has to complete tasks such as attend class, talk with people, go to the classroom, gather books, learn the spell, use magic spells, and much more. Completing these tasks reward you coins, XPs. Increase XPs to level up. The whole game is divided into chapters and to complete these chapters, you have to complete the tasks.

You play as a student, you have been chosen to attend Hogwarts school. In the game, you explore rooms of Hogwarts Castle and investigate mysteries. You attend classes, learn magic spells, unlock new characters, spells, potions, locations, and discover the truth behind the Cursed Vaults and your brother’s disappearance. The game is big, adventures, addictive, and the story is excellent. It has OK graphics, story-driven gameplay, best game for those who like adventures games.

Your first task in the game is to gather books from Flourish and Blotts. You just tap on the door, go inside, and to begin the activity, tap on the start button. You interact with people and object by tapping on them on every level. Just tap, tap, and tap. In your first activity of gathering books, you tap multiple times on glowing books. It is easy.

Your second activity in Harry Potter Hogwarts Mystery game is getting the wand from Ollivander. Scroll left to navigate to Ollivanders. There you will learn how to cast the spell. You trace the wand movement to cast the spell. Once done, go outside by taping on the alert button(follow navigation hand).

After it, you interact with your friend “Rowan”. Give yourself a name. Talk to him. Once done, you will see the main screen of the game. All the stats; level, chapters, year, coins, quest, diamond, and more stats are on the main screen.

In chapter 1 of Harry Potter Hogwarts Mystery game, you complete tasks such as talk to Rowan, attend classes, learn magic spells, and more.

Follow the on-screen instruction. Find Gryffindor Common Room. Tap on it and talk to Rowan. Rowan will ask you “What are you most looking forward to”? Choose a class; Charms Class. That’s it.

After it, you learn a new spell “Lumos” in Charms Class. This is the second task that you have to complete to get rewards; coins & XPs. You just have to cast the spell(trace the want movement-L shape). You must get 100% to pass. Interact with people(glowing) by tapping on them and learn to cast the Wand-Lightning charm.

We’ll soon update this post with more info.[Update: – The game has been out worldwide, please check the latest guide walkthrough -> here].