There are lots of states in the State Of Survival game. Each state can have a governor. The governor is appointed by the alliance leader – the leader of the alliance, which dominates the capital of the state. Each state has its capital – alliance(s) in the fight for this capital and enjoys the perks/skills. If you are new to the game, then you are on the right page. This State of Survival Governor guide covers the basic concept of this system. So without further ado, let’s get started. 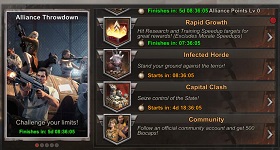 Governor is appointed by the alliance leader who dominates The Capital of the State. There is a capital clash event in the game – it starts after the protected status of the capital ends. During this event, the alliance can try seizing the capital of the state. To dominate or rule the capital, you must occupy it for 8 consecutive hours or hold the longest capital time at the end of the event. Of course, it would require lots of troops; powerful armies and the top alliances would fight for it.

To check the event status, tap the Events option in the upper-right side – it will show you the time left for the next Capital Clash.

(This info is provided by lilo on our main guide article).

Lilo: – Governor credits are sent to the person who has control over the capital. There are different perks the capital has. The Governor (one who controls the capital) can find any settlement, can stop any player from being able to attack for a period of time, can move any settlement to a random location, and of course, gathering boosts and such. But the Governor needs the credits to be able to activate the capital perks.

Each state has its Capital. Go to the Wilderness -> tap the map button in the bottom-right side – above the talents option -> this will take you to the state map screen where you can check the Capital; in the center of the map. Tap it to check it to zoom – then tap the capital -> In the occupant tab, it shows the governor who is in power. In the War Log, it shows the war activities by the alliance leaders. Head to the Hall of Fame tab to check the governors.

As per our info, at the beginning of the game, you are assigned in a random state. Before hitting the HQ level 6, you can change the state. Go to the Wilderness -> tap the map option on the bottom-right side -> tap the globe map on the state map screen – this will take you to the world map where you can check all the states in the State of Survival game. Select the state where you want to teleport -> go to its map -> select the area where you want to move on the state map -> tap on the empty area -> join state.

Requirements to change the State: –