The Basics – How To Play Final Destiny Game?

Well, there is nothing new! The game follows the same mechanics that can be found in other MMO games. However, the reward system or game modes mechanics are quite good as compare to other similar games. In Final Destiny, your main objective is to build a team of heroes and increase their power. Take them into the arena and battle against other players from all over the world. At the beginning of the game, most of the game modes are locked as there is a level restriction.

You start the game from adventure mode in which you complete the chapters and earn a bunch of rewards; XP, fragments, beast fragments, weapons, potions, and much more. As you progress or level up, new game modes get unlocked; arena, dungeons, events, boss fights and more.

Final Destiny game features Idle battle gameplay; heroes attack the enemies automatically, you can use their skills manually. After the battle, you earn rewards, XP, and much more. After a certain level, arena mode gets unlocked in which you battle against other players. Getting victories in the arena mode will improve your rank. As you rank-up on the leaderboard, the battle will become hard as you will have to fight against powerful enemies. That’s the challenge. Can you build the powerful team of heroes and maintain the top rank in the leaderboard? Here’s the main screen guide: – 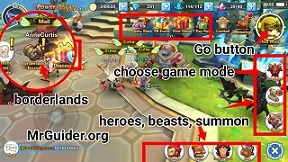 In this part, we will learn about the fragments, beasts, heroes, weapons, game modes, upgrading, items, and much more. Make sure to check everything.

Each class has its own advantage and disadvantage. For instance; Priest class characters provide buffs to other team members, but they have poor HP & ATK stats. You can check the complete list of characters featured in Final Destiny game in the sorted mode; on the main screen -> tap the heroes icon -> on the next screen, at the bottom-right corner, tap the archives button. There you can see the whole list.

If you tap the hero icon, the game will take you to his/her profile where you can see the attributes of that character; HP, ATK Power, Defense, and more. Compare these stats with all the heroes you have and select the best ones for the fight.

How To Unlock More Heroes?

You need to collect hero fragments in order to unlock a hero. For example; Mikkel is a priest class character in the game and to unlock it, you need 30 Mikkel Fragments. Go to the character list menu -> there you can see the number of fragments required to unlock.

How To Obtain Fragments?

You can obtain character fragments by completing the chapters or stages in dungeon mode, by summoning or through shop/honor-shop/as a reward/on completing the quests. How to summon? -> On the main screen of the game -> tap the galaxy gate option -> hit the summon button.

How To Increase The Power Of Heroes?

It’s common in every game; as you progress, the level or game modes become difficult to complete. There are a number of ways to increase the power of heroes; let’s learn about all: –

As you know, in the battle, heroes attack the enemy team members automatically. But we have full control over their skills. When their energy level reaches the maximum point, their rage-skill gets charged. Tap the skill icon to use it. You can enhance the impact of it by upgrading. Go to the hero menu -> select the hero -> head to the skills tab -> tap the upgrade button. It costs you coins.

How to unlock new skills? By raising the star level, you can unlock the heroes’ skills.

When you raise the star level of a hero, its strength gets increased by a massive amount. But it’s not easy. You need to gather or collect the heroes fragments. For example; you have one hero and its name is Hala. To raise the star level of Hala(from 1* to 2*), you need 10 Hala Fragments. If you have, then go to the upgrade tab in the hero menu and confirm the action. Read the fragment guide above.

You can obtain these items by playing the game; from dungeon mode, by completing the quest, from the chest, from party dungeon, and there are many more ways. Make sure to equip the best gears. Go to the hero menu -> use the auto-equip feature to equip the best ones. You can also enhance the gears; tap the gear -> enhance – confirm.

Beasts are another main characters in Final Destiny game. These characters provide or activate buffs; increase in HP, ATK, Defense. You can choose a beast before you start the challenge. After tapping the challenge button, the game will take you to the team editing page where you can add or remove or change the heroes. There would be a beasts option too. Tap it and select the beast(if you have).

How To Obtain Or Get beasts?

How To Obtain Beast Fragments?

You can obtain it in exchange for gems or we would recommend you to keep patience and save gems as you can get it for free. In the dungeon mode, clear the chapter number 2(normal) and unlock or open a mine named Beast’s Lair. From this mine, you can collect beasts after a certain amount of time. You can reduce the time by upgrading the mine. In the cheats & tips part below, we have explained the mining mechanics.

How To Upgrade The Beasts?

As you know, if you add the beasts to the team, they will provide passive buffs to all the team members. By upgrading the beast, you can increase their buff power and get more advantage of their buffs. Go to the beast menu(main screen -> train -> beasts) -> head to the feed tab -> use the beast crystal to upgrade it. You can obtain this item from Beast’s Nest mode(main screen -> dungeon -> Beast’s Nest).

#1.) Pay Attention To The Assessment Of Heroes

In the Final Destiny game, you should develop or focus on the best heroes only. Don’t spend gold in upgrading useless heroes. Now, the question is how to figure out the best heroes? It’s very easy. All you need to check the assessment or their attribute ranks; go to the hero menu -> tap the hero -> on the next screen, take a look at the Assessment point; it should be like this: –

As shown in the above picture, this hero has A rank in ATK, B Rank in Defense and Support. On the basis of rank, you can evaluate the performance of a hero in long run. Here’s how: –

Here’s how to build the team: –

#2.) Take Care Of Mines and Upgrades

In the dungeon mode, as you complete the stages, you will eventually unlock mines. For instance; clear the chapter 1 to unlock gold mine and Mythic Cabin. Clear the chapter 2 to unlock workshop, Beast’s Lair. These mines produce resources; for example; gold mine produces gold, Mythic Cabin produces chest(free rewards), workshop produces upgrade material, Beast’s Lair mine produces beast. Make sure to collect the rewards from these mines daily. You can reduce the production time and increase the amount of reward by upgrading. To upgrade the mines, you need stars. In Final Destiny game, you earn stars by completing the stages in dungeons mode.

From there you can summon creatures or heroes. You can summon for free after every 10 minutes. Make sure to visit there often to grab free rewards.

Adventure mode is divided into two modes; normal and elite. Similarly, levels in adventure mode can be completed in two modes; normal or difficult. The drop rate of items is based on the difficulty level. We would recommend you to complete all the chapters first; first normal, then hard and then head to the elite stages. Clearing stages is one of the best ways to acquire free hero fragments. (Path? Main screen – dungeon -> dungeons -> at the top, select the mode; normal or elite).

#5.) Complete The Missions For Freebies

You can grab a bunch of precious items for free by completing the missions. Tap the quest button on the main screen and check out the missions. Complete all types of missions and get rewarded with a bunch of free items.

#6.) Set Up The Defending Team In Arena

In the arena mode, you fight against other players’ team and win gems or honor points. You can spend honor points in the honor shop for weapons & items. To earn more rewards or increase the rank; make sure to set up the defense team. Here’ show: –

Level Up to unlock these modes and farm special items: –

The reward system of this game is amazing.

#8.) Defeat The Borderlands For Gems

If you need gems, then don’t miss this opportunity. You will see a notification icon on the top-left side of the screen(see the first picture of this post); Borderlands found. Tap it and accept the challenge. Win the challenge and get gems for free.

So these are some top Final Destiny tip, cheats & a strategy guide for the beginners. Also, see – Top new Android games of this week.