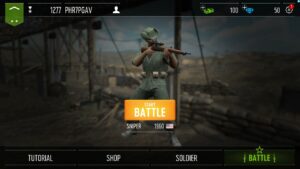 Forces Of Freedom is one of the best action games for Android. It features 5v5 team multiplayer mode in which your goal is to defeat the enemy and capture the flag. Check out our Forces of Freedom guide and Forces of Freedom tips, cheats to get the victory

Forces of Freedom by BRAVOCOMPANY Ltd. is an online multiplayer game for mobile devices. Currently, it is in early access mode[under development] and only one game mode is available. It features real-time multiplayer mode, you play with four other players and the only one goal is to eliminate the enemy team or capture the flag. Your contribution really matters to get the victory. Before we continue to Forces of Freedom tips, cheats, and strategy, let’s start the guide first;

The game starts with a tutorial in which you learn about the basic of the game; movement, aim & shoot, capturing the flag, and much more. After the tutorial, you just tap on the start battle button and enter the open field where you have to shoot down the enemies.

The Basic – In this game, your objective is to eliminate the enemy team and you can not achieve this objective alone. You have to contribute to your team by capturing the flag, slay down the enemy, damage, protect your teammates. There is a fixed time limit of the battles; the team will get the victory instantly after eliminating all enemies. If both the teams fail to do so, then the percentage of the area captured by a team will determine the victory. The primary objective should be of eliminating all the enemies within the fixed time limit. If your team failed in eliminating all the opponents and there are few seconds left, then move towards the flag and capture the area. 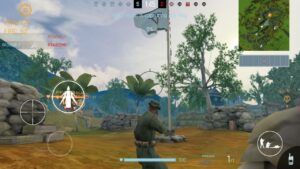 In this part, we will talk about the battleground. It is an open field, you can go wherever you want to go. You can hide behind the rocks, house, trees, under the bridge. At the top bottom of the screen, there is a map. Tap on the map and you can see the clear view; flag, your teammates’ location, enemies. At the bottom-left corner, there are three control options; joystick to move your character, zoom-in, and fire button. At the bottom-middle of the screen, you can see your health. On the bottom-right corner, there are two options; to change position or a mobile phone; tap on it to contact your teammates; ask for help, to command; capture the flag, well done, or more.

At the top-center of the screen, you can check the status; time left for the battle and number of teammates or enemies on the battlefield.

Your health is limited. If you have been defeated by the enemy, you can go back to the menu or watch how other teammates are handling the battle. If your team gets the victory, you will earn trophies and other rewards on the basis of your participation. There are a number of ways to contribute to the team;

Let’s start the Forces of Freedom tips, cheats, and strategy

As mentioned above, it is currently in early access mode and does not feature so many weapons and soldiers. But still, you have three choices; scout, sniper, and rifleman.

You have to choose the solider with whom you are comfortable because each has own pros & cons;

If you choose soldier(sniper), then you can shoot the enemy from a long range; effectively and accurately. But there is a disadvantage of the single fire. After you fire a shot, reloading takes almost 2-3 seconds.

Rifleman – If you choose rifleman, then you can not kill the enemies from a long range distance. But you can fire back-to-back.

Scout – If you choose the scout, you can run fast.

So choose the soldier wisely before you start the battle in Forces of Freedom game. Main screen -> soldier -> select the soldier. Switch to globe for more options.

2.) Change the strategy according to the Soldier – Forces of Freedom tips, cheats

You can not execute a single strategy with all soldiers. For example; if you choose the rifleman, then you get the advantage of rapid fire. If you choose the scout, you can run fast. With the sniper, you can shoot down an enemy from a range.

So if you are choosing sniper, then climb the hill or go to the top and target enemies from there because you can shoot from a long distance. If you have selected rifleman, then take the advantage of rapid fire; go close and aim & shoot. If you have selected scout, then you can run fast; target rifleman or sniper enemies because their speed is slow; spot them, don’t let them go, go close, give them surprise and start shooting.

Keep note that if you have selected sniper then keep away from enemies because reloading takes time. It would be better if you attack from a long distance.

It is a shooting game and if you are taking too much of time in aiming and shooting, then the opponent will get the benefit of your weakness. Keep playing the game and enhance your aim & shoot skills. If you are not good at shooting, don’t go close to enemies, hold down on the fire button and improve the sharpness of your shot.

After the battle starts, don’t go ahead alone, follow other team members. If you go ahead alone, then chances are you will be the target of multiple enemies and it would not be easy to face two enemies at a time.

To get more points or trophies, you have to contribute to your team; kill enemies, capture the flag, spot the enemies, and there are many more ways. If you are just avoiding enemies, then it does not make sense, don’t hesitate, just move further with team members and start shooting.

Before you start the battle, plan your strategy; how to defeat the enemy? Contribution? Like;