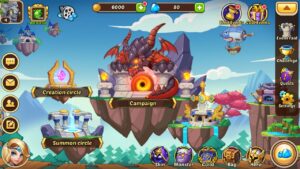 The game starts with a tutorial in which you learn about the basic of the game; how to play Idle heroes, about upgrading, summoning, and much more. After you complete the tutorial, you can manually handle all the things.

What you have to do in the game?

As it is an Idle game, your heroes attack automatically. Your only task is to build the powerful team of heroes. Before you start the battle, you have to choose your best powerful heroes. At the beginning of the game, you have low-quality heroes. Initial levels are easy, but, after it, it would not be easy to defeat the powerful enemies.

In short, your primary task is to build the powerful team of heroes. Let’s start the Idle Heroes guide;

Heroes are of five types; 1-star, 2-star, 3-star, 4-star, and 5-star. The 5-star heroes are more powerful in comparison to low-quality heroes. How to get 5-star heroes?

There are many ways to obtain 5-star heroes;

Getting 5-star heroes is not an easy task. One of the best ways to get these heroes is using heroic summon. We have listed some Idle Heroes tips below, don’t forget to read.

If you have powerful heroes in your team, you can easily defeat the enemies.

On the main screen -> scroll right -> Blacksmith. You can use low-quality gears to forge best ones. For instance, you have the one-star swords and you want the two-star sword. Then tap on the two-star sword and choose the quantity and hit on forge button. It is one of the best ways to acquire high-quality weapons & armors.

The endless battle mode in which you defeat enemies from different servers. The hero health points would not recover during the trial. So you need a good strategy to beat them.

In this, you clear floors by defeating the guards. It is heavily guarded and defeating those guards is not easy. However, if you need powerful equipment, promotion stones, play it.

In this mode, you challenge other players. You can earn diamonds, coins, and much more by getting victories in this mode.

How to get heroes?

In this part, we will talk about the Idle Heroes tips to build the powerful team of heroes.

Getting 5-stars heroes is not an easy task. But it does not mean you can not defeat the powerful enemies. There are many ways to increase the power of heroes;

The main attributes of your heroes are; health points, attack power, defense, and speed. You can increase these attributes by upgrading your heroes. This will boost the performance of your hero in the battle and you will be able to defeat the powerful enemies.

Keep note that you have to build the powerful team of heroes. If you are upgrading one or two heroes, then you are doing wrong! Upgrade all(selected by you for the battle) and boost the team performance. Main Screen -> Heroes -> Select a hero you want to level-up -> tap on the up button next to level-up and confirm. You need spirits and coins to level-up a hero. Both items can be obtained from the battles, as a reward.

You can obtain these gears by getting victories in the battles. To use them, go to the hero info section -> equipment -> tap on the onekey equip button. That’s it. High-quality gears increase the attack power and defense power, use forging feature to get powerful gears for your heroes.

Evolving is another one of the important tasks. You can evolve a hero after reaching the milestone levels; 30, 40, 50, and so on. Evolving also unlocks the locked skill of heroes. So keep upgrading and evolving the heroes.

At the beginning of the game, most of the features are locked. To unlock these locked modes, level-up your profile. to level-up, you need XPs. Focus on campaign mode, get victories and earn XP and other rewards. Complete the challenges, quests and event raids for more rewards.

So this is the Idle Heroes guide and tips for the beginners. Download – here(Google Play Store). Also, see – Top new Android games