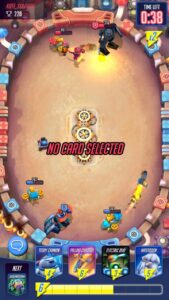 Orbital 1 is a strategy game for mobile devices by Etermax, the creators of Trivia Crack game. In Orbital 1, you build the best deck of units and battle against other players from all over the world. Check out our Orbital 1 guide and Orbital 1 tips, cheats

Orbital 1 is a great strategy game for Android, similar to Clash Royale game. In Orbital 1, the player battle against other players from all over the world. The victory depends on two things;

Get instant victory after destroying the captain.

If both players fail to destroy each other’s captain or defenders, then the match will be tie, you will get the extra time. In this extra time, defenders play an important role. Destroy the defender and get the victory.

Orbital 1 is an intersting strategy game and its gameplay is really good. Using the best strategy, you can easily defeat the opponents. In this post, we have covered everything about the game; Orbital 1 guide, Orbital 1 tips, cheats, and strategy

As usual, Orbital 1 game starts with a tutorial in which you learn about the basic of the game; how to play Orbital 1, deploy units, upgrading, couriers, cards, and much more. After the tutorial, the player has to manually take care of all kinds of things; upgrading, managing the deck, and so on.

The Basic – In this game, you choose your best units[troops, gadgets] for the battle, deploy them in a strategic way, protect and defend your captain & Defenders, and increase the power of your units by upgrading.

The Gameplay – Your objective is to destroy the opponent’s captain & defenders as fast as you can. Both the players deploy the units on the battleground in a strategic way to win trophies. Let’s start the Orbital 1 guide and Orbital 1 Tips;

Cards are of many types;

The attack style of each unit is different; some units attack from a distance while some units go close to the enemy unit and then start the attack.

How to unlock new cards?

To unlock new cards, earn trophies and jump to the next stadium.

There are a number of ways to obtain cards; win a challenge, open the couriers or using real-money. To level-up a unit, you need the same unit card. For instance, to upgrade chaser unit, you need chaser cards.

The player gets free courier after every four hours. Another way to obtain couriers is by getting the victories in the battles. Don’t forget to wake up them.

⇒ Here’s the process you have to follow in the Orbital 1 game;

Use the best combination; include all types of units; air troops, gadgets, attack from a distance/range, with fast movement speed.

After building the best deck, it’s time to practice. Play in the practice mode before you try in challenge mode. By playing in practice mode, you will be able to know the weakness of your deck.

⇒ If it goes wrong, do some changes and try again!

⇒ How it works! -> It’s important to know about the units. If you don’t know about the units, then you can not use them in a strategic way. Go to the deck section -> tap on a unit and check its information and other attributes; is this unit fast? Damage? HP? and so on!

⇒ Go to the shop section -> scroll down to bottom -> cards -> if there is a good deal available, grab it in exchange for gold coins.

⇒ Level-Up by upgrading the units. Leveling up increases the attributes[HP, damage] of your captain and its companions/defenders.

So this is the Orbital 1 guide and some tips for the beginners. Download the game – Here[Google Play Store]. Also, see – Best Strategy games for Android 2018