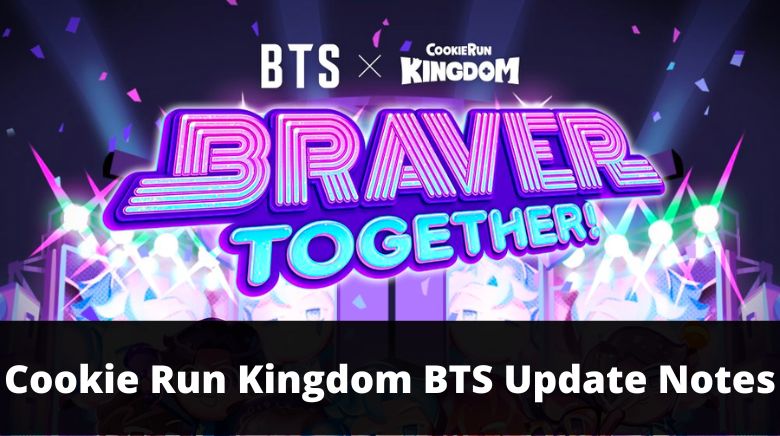 – BRAVER TOGETHER! BTS X COOKIE RUN: KINGDOM CROSSOVER
(OCT 13 – JAN 19)
The whole Cookie Kingdom has turned purple: the BTS
crossover is about to begin.
Show your Kingdom to the BTS Cookies, participate in the
crossover events, and have fun together!

1) [SPECIAL] BTS COOKIES
– Seven BTS Cookies join the Kingdom!
• Meet RM Cookie, Jin Cookie, SUGA Cookie, j-hope Cookie,
Jimin Cookie, V Cookie, and Jung Kook Cookie.
• All the BTS Cookies have the [SPECIAL] rarity and use the
“ARMY’s Wishes” skill.
– Skill Description: Thanks to ARMY’s sincerest wishes, the BTS
Cookies are Safeguarded and invulnerable to enemy attacks.
Use the skill for periodic healing and a buff providing immunity
to Stun and increased Debuff Resist for the entire team. If an
ally is suffering from a certain number of debuffs, the entire
team will additionally receive an HP Shield.

– The BTS Cookies can only be obtained through the crossover
gacha and will not appear in the regular gachas.
– The BTS Cookies’ skill will be automatically upgraded with
level ups without the need to use Skill Powder.
– The number of Soulstones and Soulcores required for the BTS
Cookies’ and other Special Cookies’ promotions will be adjusted
as follows:

4) BTS-THEMED DECORS
Decorate your Kingdom with the new BTS-themed decors.
“We are Purple, We are Together!” theme.
• “BTS’ Happy Kingdom Life
theme.
“The Tales of Bangtan Kingdom” theme.
The BTS decors can be obtained through the BTS crossover
gacha and Mileage Shop.
Certain BTS decors will produce the crossover currency “Army
Bomb
during the crossover.

@ Army Bomb Missions
– Complete missions and earn Army Bombs to use in the
crossover gacha.
© Map of the Kingdom Tour Stamp Event
– Complete missions, earn stamps, and claim rewards.
– Collect stamps to receive the
“Purple Stage of Fantastic
Memories” decor.
– Collect all stamps to receive the final reward: an Ancient or
Legendary Cookie of your choice.
® Cookie Kingdoms as Drawn by BTS
– Unravel the Cookie Kingdom stories envisioned by BTS,
complete missions, and earn rewards.

© BTS Crossover Purple Pass
– Clear missions and earn Purple Pass Points to claim rewards.
– Purchase the Purple Pass to unlock additional rewards.
© Braver Together! BTS Concert, Season 1
– Master BTS’ hit songs in Rhythm Stage and try the event
ranking: the higher the ranking, the better the reward.
– In Season 1, you will be able to play Dynamite / Permission to
Dance in Rhythm Stage; more tracks will be available in the
following seasons.

© Riddle Kingdom with BTS
– Enter the correct answer to the Riddle Kingdom Challenge and
get a chance to win the limited edition BTS x Cookie Run:
Kingdom Artbook.
• Find hints scattered across the world with the help of Cookie
Run: Kingdom social network pages and guess the answer to the
riddle.
• The more players complete the challenge, the better the
rewards and more artbooks available for winners!
© BTS Ticket Book Missions
– Master BTS songs in Rhythm Stage, clear missions, and
complete the ticket book to earn rewards.

[EPIC] SCHWARZWÄLDER
– Schwarzwälder is a Charge Cookie who uses the skill “Choco
Chip Hammer”
– Skill Description: Each Schwarzwälder’s regular attack has a
chance to stun the target. Upon using the skill, Schwarzwälder
will receive the Howling effect, increasing his own ATK, ATK
SPD, and DMG Resist. When the effect duration is over,
Schwarzwälder will charge at the enemies, strike them with his
hammer, stun them, and inflict the Hammer Shock debuff. The
debuff will reduce the enemies’ ATK and cause them to receive
more damage from the next Schwarzwälder’s skill attacks with
the hammer.

– WE ARE THE DEVILISH B.A.D 4!
Wait, who’s that? These weird Cookies appeared out of nowhere
during the BTS concert in the Cookie Kingdom!
Find out who the new devilishly sweet new idols are on October
14.
But wait, that’s not all: their outfits will become available in the
update after the October 13 one to celebrate B.A.D 4’s grand
debut! We’ll have the details on the next update in a separate
notice.