In this Second Galaxy Ships guide, you will learn everything about the ships, their types, how to build the best ship, use best attachments, etc.

As a newbie to the game, it’s quite hard to learn all the things by self – and, still, you might be in confusion because Second Galaxy Ships concept is quite hard to digest by self.  We will simply explain everything and try to cover all the basics that you need to know about the ships in this Second Galaxy Ships guide. So let’s not waste any time and head to the main content.

As per the current version of the Second Galaxy game, you have the option to configure, acquire, build six types of the ships. For different missions, you will need specific types of ships. For example – In some of the missions, you can’t choose Frigate, Capital Ship – only destroyer or cruiser can be qualified. If you don’t know about the qualification criteria, we would recommend you to check the following guide –

Let’s learn about each tag!

Only a simple basic structure of the ship would not help you in defeating the horde of enemy ships during the combat. You can attach a variety of attachments to the ship. Also, there are some built-in attachments;

These are the build-in attachments that affect the ship stats or attributes. Each attachment plays a different role during the combat: –

Before you head to the ships build guide, you should be aware of how the combat works – how the ship utilizes its attachments during the combat. If you have no idea how battle works or control works, be sure to read the basics guide here ->

You need four things to build a ship: –

You can equip a variety of weapons to the ship. When choosing the weapons for your ship, pay attention to these stats: –

Range – If the target is far or not in range, the ship would not be able to attack it. If you want to strike from a long distance, equip the weapons which provide you long-ranged attacks. For example – sniper weapons.

Activation Cost – To use or activate the weapons in Second Galaxy, you need energy. In short, using weapons cost energy. Without energy or spending the activation cost, you would not be able to use the weapons. Usually, heavy weapons and sniper weapons cost much higher energy as compared to the light & combat weapons.

Cooldown – After using the weapon for one time, it will go in a cooldown stage and during that period, you would not be able to use it. Some weapons have a high cooldown, while some get back to normal in no time.

In the Second Galaxy, you can equip lots of types of devices. Let’s learn about each one.

Using these components in the ship helps you to boost damage, energy cap, range, shield, and speed like attributes.

You need ammo to use the weapons. Without ammo, weapons would not work. Go to the ship hangar -> tap the ammo button -> quick buy or load more and then confirm. 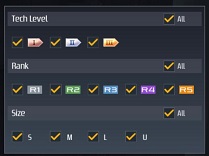 Weapons, Devices & Components in Second Galaxy come in three sizes; small, medium, and large. To check the size of these things, go to the ship hangar -> pay close attention to the icon(weapon or device or component) -> at the top-right corner of each weapon/device icon, there would be the size – S, M, L. Or tap a weapon or device -> details -> in the (i) tab, under the specs, you can check the size. If you see U, it means universal(can be applied to all kinds of devices).

Rank – weapons, devices, and components come in five qualities or rank – r1(grey), r2(green), r3(blue), r4(purple), r5(orange). Higher the quality of a weapon/device/component, the more attributes a ship get. Pay attention to the color of these items to check their ranks or check the details page.

In the Ship Hangar menu, when you select the ship, the game shows its details on the right side. At the bottom part of the details section, there are two fields; processor and power. What are they?

How to build the best ship in Second Galaxy?

What would be the best configuration? We would recommend you to follow the default configuration. Go to the ship hangar -> select the ship -> tap the configure button -> default -> apply.

Once you learn all the key concepts, try building the ship manually. Here are some tips to configure or build ships wisely: –

So that would be all in this Second Galaxy Ships Guide for the beginners. If you have more tips to share, feel free to comment below. Also, see –

For More Updates, Game News, Game Guides, New Game Releases, And ALERTS – Like Us On Facebook – MrGuider, Follow Us On Twitter – @techhuntr. Check Out – Top New Android Games Today. So, do you have any suggestions?Submit Here