Let’s learn about the mayor’s roles in LifeAfter game and grow your camp’s rank by increasing prosperity, management, claiming territories

Creating a camp is quite easy; you spend the gold bars and that’s it. But taking the camp to the next level is not quite easy as there are plenty of things that you need to do. In LifeAfter, the player who creates the camp gets the mayor badge/role. After that, it’s his/her duty to grow it and access to all the features such as trade city, territories, camp safety, and more. Once the seven days passed, zombies will attack the camp’s members manor and the camp hall. It’s the mayor’s duty to alert all the members about this event and get ready with guns, ammo, health packs. Things get easier if all the members in the camp are active. Let’s learn everything in detail – LifeAfter: How to be a great mayor?

This is one of the must known topics in LifeAfter game when we discuss the camp’s mechanics. When the camp’s members send the resources to their manor mailbox from outside and the camp charges a certain amount of supplies through the taxation system. This tax amount is used to pay the camp’s operation cost.

If the camp pays its operation cost on a daily basis, prosperity will increase. In the camp’s town hall, there is a bank and inside the bank, there is a vault. Go there and open the vault. The vault menu screen has three tabs; camp tax, resources, and sell. In the camp tax tab, you can check the current tax rate, operation cost. It includes wood, food, hemp, and stones. When the camp’s members bring these resources from outside the camp, camp takes a certain amount of supplies through tax.

If all the camp’s members are active and gathering all these items, there would not be any problem paying the camp’s daily operation cost.

To adjust or change rate, mayor or one of the officials has to visit city hall/mayor hall -> camp data center(manage) -> fiscal info -> In the revenue tab, tap the adjust rate button -> use the <> keys to adjust the tax rate. In the taxation tab, you can check the member’s contribution to the camp’s revenue(through tax).

How To Upgrade The Camp’s Period? 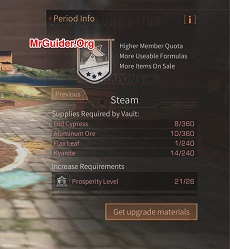 These are the three main requirements that the mayor needs to fulfill. Prosperity = Prosperity of the camp. Management – Management points. Resources – Certain resources.

To upgrade the camp’s period, enter the city hall -> data center(manage) -> period info -> upgrade. On the period info screen, you can check the prosperity level, management points, resources. And, when you tap the upgrade button, it will show you the supplies required by the vault.

How To Increase Prosperity Level – LifeAfter?

There are over five ways to increase the prosperity level: –

1.) Pay Camp Operation Cost – We have already discussed this point above. All you need is active members. They will collect wood, hemp, stones, and food. After that, the taxed resources will be used to pay this cost.

2.) Complete Patrol Quest -> In the camp’s town hall, go close the call-board. There you can accept the patrol quest. In LifeAfter, patrol quest rewards gold bars, resources, and prosperity points. So it’s better to complete it every day. You can go for the easy, normal, and hard. After accepting the quest, you will see quest target points on the map. Visit these points and kill the zombies. After that, go close to the clock-in machine -> clock it(sometimes).

4.) Research Camp Technologies – In the city hall, go upstairs and you will find the R&D Device. To fix this device, you need a certain amount of vault supplies, prosperity level, and management points. After that, you can research new technologies to upgrade to a new period.

5.) Enable Camp Territories – To let more people in your camp, you can start the territory claiming quests. To do that, enter the mayor hall and talk to Edward -> start the development. After that, complete the territory quest. For example; submit rusty key, submit bandages, and more.

6.) Build Private buildings -> We’re not sure on this, but as far as we know, it’s the map bidding system. If you know about this, comment below!

7.) Camp Goods – There are several merchants in the camp’s town hall, buy goods from them and your camp will earn some prosperity points.

How To Maintain Management Risk?

The mayor can assign members on an official post and give them permissions: –

If you have any question, drop the comment below. So this is the LifeAfter: Mayor FAQ. We have posted many articles on LifeAfter on this site. Don’t forget to check!

129 thoughts on “LifeAfter Camp Mayor Guide: How To Be A Great Mayor?”