MapleStory Blitz by Nexon is another great strategy game for Android in which the player builds a powerful deck of heroes and skills to defeat the opponent in several game modes. The game features lots of heroes [each hero has own unique attack] and skills. If you don’t know how to play it, then this MapleStory Blitz guide will help you. 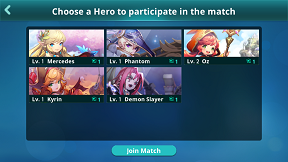 The game starts with a tutorial in which you learn about the basic of the game, how to play, about deck building, cards, skills, and much more. It is a tower defense game in which you deploy your heroes on the battleground to destroy the enemy tower and for the victory. Your task is to defend your tower from the enemy and destroy enemy tower. You have limited number of cards/heroes/skills to deploy, using them wisely on the battleground leads you to the victory. Let’s take a look at all things of MapleStory Blitz. Also, see – Best offline games for Android

MapleStory Blitz game features five heroes. Each hero has their own unique deck of skills & cards. At the beginning of the game, you start with Mercedes. To unlock new heroes, the player has to beat them in Dungeon mode. Hereos in MapleStory Blitz: – Mercedes, Phantom, Oz, Kyrin, and Damon Slayer. Also, see – Best Pokemon games for Android

How to unlock these skills?

To unlock the skills of a hero, you need to level-up that hero. For example, Leveling up Oz hero to level 8 unlocks flame elemental skill.

How to level-up heroes in MapleStory Blitz? 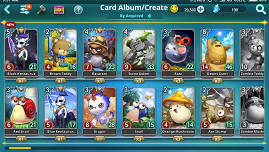 One of the complex parts of MapleStory Blitz is building a deck. If you are a beginner and don’t know about this part, then you should read this carefully.

Go to the deck section, there you will see three sub-sections: – Card Album/Create, Extract Card, and My Deck. Let me explain all of these in a brief detail: –

In this section, you can create cards. Cards = Monsters. You can unlock new monsters by creating cards. Scroll right, tap on a card which is not in your card album. To create a card, you need material(mesos/coins, diamond/essence, and more). If you have enough material, then you can create that card. If not, then you need to find the material to build that card. It’s easy. There are lots of cards you can create in MapleStory Blitz. Each monster/card has its own unique damage power, HP, skills, and attack style. Creating a card cost you in-game currency, so use it wisely. Also, see – Best Action games for Android

If you have multiple cards of a similar type of monster or you don’t need a specific hero, you can extract it and get essence as a reward. Essence used in creating cards. You can not extract any type of card. There are only a few cards which can be extracted. Also, see – Top new best Platform games for Android

This is the main section where you can customize your deck. As mentioned above, each main hero comes with a unique set of cards and skills. There are five heroes in MapleStory Blitz, you can create five different decks. Tap on the + button and create a deck. After it, tap on an empty deck, choose the hero, select the monster and skill cards for the battle. You can select up to 30 cards. Choose the best monsters and skill cards to get the victory. You can create multiple decks of the same hero and select anyone before the battle starts. Also, see – Top new best escape games for Android

MapleStory Blitz features many types of game modes; practice match, ranked match, virtual arena, dungeon, and monster park. Dungeon mode features lots of adventures levels, complete them and you can earn EXP, material for the card, and much more. In the virtual arena, you will battle against an AI against a real player’s deck. To play in the monster park, you need monster park entry tickets. Also, see – Best Survival games for Android 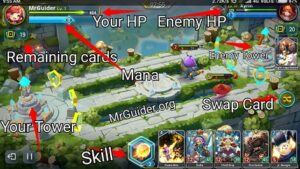 Tap on the start game option, select a game mode. Choose the hero and select the deck that you have created in my deck section. The deck includes 30 cards(monster and skills). Enter the battle.

Rules: – You have to destroy opponent’s tower base before the opponent breaks your tower to get the victory. Also, see – best addicting Android games

Tasks: – You just have to deploy monsters on the battleground and use skills. Skills are of many types; HP boosters, for damage, long range, and more. Tap on a card and select the route. Each hero cost is “mana”, mana restores automatically after a few moments. You have limited number of cards, so use them wisely. Use skill cards at the right time instead of using them blindly. Use swap option to shuffle cards. You can also use your main hero’s skill(change it by visiting my deck section). Also, see – best 3D games for Android 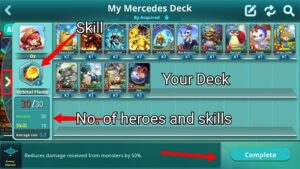 In MapleStory Blitz, before you start the battle, you need to make sure that you know everything about your cards(monsters and skills). If you have no knowledge about each card you have added to the deck, then it means you can not get the victory easily. So go to my deck section, tap on each card and read about it. Compare all the cards with each other and add the best cards to the deck. Also, see – Best Android games

This MapleStory Blitz guide and tips are enough for a beginner to understand the game. After it, you will automatically learn new things about the game. It is a great TD strategy game with lots of fun and challenging game modes. Download MapleStory Blitz – here(Google Play Store). Also, see – Top new Android games today