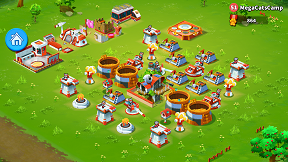 The game starts with a tutorial in which you learn the basic of Talking Tom Camp game; how to play, upgrading, defending, deploying, troops, buildings, resources, and much more. After it, the player independently handles all the things. This is the beginner guide for Talking Tom Camp game, help you to play the game easily and basic tips & strategy(attack and defense) to protect coins and loot camps. Also, see – Best addictive games for Android 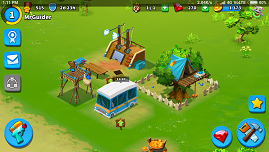 In short, your camp includes many buildings and number of coins which can be protected with defensive units. Your enemy will attack your base/camp to steal your coins, you have to choose the best strategy to defend your camp. Let’s begin the detailed guide for Talking Tom Camp game: –

Your task is to grow your camp and earn more coins than others. To grow your camp, you have to build buildings. You need coins to build these buildings. To earn coins, you loot other players’ camps or produce coins by building the coin factory. So coins are valuable and much needed, the best way to earn coins in Talking Tom Camp game is attack other players’ camps. To attack, you have to train troops(train shop building is required). Quick Process: – 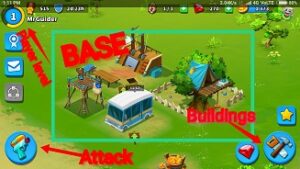 From the main screen, you can customize your base, go to attack, and access to all features.

Tap on a building and hold down your thumb on it, and drag where you want to move. To get more information about a building, tap on it and choose (i) option. Also, see – Top new best Android games

Buildings are of many types:- defense, production, for training, for heroes, storage, and more. Let’s take a look at all: – [Tap on the hammer icon at bottom right to access to buildings]

Mini-Van – You can not train an unlimited number of troops, there is a fixed limit. To increase the limit, you have to upgrade mini-van so that you can train more troops for the fight.

Tap on troop shop, then + and choose the best troops for the battle. Check the box next to retrain to automatically train troops. Also, see – Best 3D games for Android

If you are a beginner and don’t know where to start, then these tips will help you: –

First of all, upgrade your tree-house, so that you can add more buildings to your camp. Without upgrading tree-house, you are bound to add and upgrade buildings. Also, see – Top new best platform games for Android

Upgrading tree-house requires a huge amount of coins, you need to upgrade the storage to meet this requirement. For example; You need 15,000 coins to upgrade TH, and your storage capacity is 10,000. To complete this task, you need to increase the capacity by upgrading storage.

You have limited coins, don’t spend them blindly. For example; you have 15,000 coins and you spend all to upgrade tree-house, ignoring other buildings. Before upgrading tree-house, build all the unlocked buildings and upgrade all of them. Also, see – Best escape games for Android

The opponent will get the victory if he/she damages 50% or more of your camp or only tree-house. As you know, you can deploy troops on the road only. So place your short range defensive units[tower, sprinkler etc.] first, then long-range defensive units[catapault, tower etc.]. Your treehouse should be covered from all sides[place it in the middle]. Also, see – Best game guides

You have low-level troops at the beginning of Talking Tom Camp. Each troop has some pros and cons, analyze all the pros and cons, compare each troop with another and choose the best ones. For example, Ballooner has more HP than Blaster, Blaster can attack from a range but his HP is low. Choose the best combination and then continue.

Before the battle starts, analyze all the units placed by the enemy and deploy your troops according to it. You can skip the camp by taping on the next button if you think the loot is low and you will not get benefit from it or your troops cannot destroy it. Also, see – Best survival games for Android

Talking Tom Camp is a great strategy game for Android and if you are a Clash Of Clans fan, then you should give it a try. Download Talking Tom Camp – here(Google Play Store). Also, see – Top new Android games today