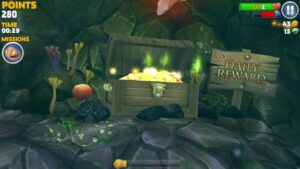 Hungry Shark Evolution by Ubisoft is one of the best Android games. The fact behind its popularity is its endless gameplay. It is simple, challenging, and addictive; controls are smooth, gameplay is far better than other arcade games, and everyone loves it. There is only one task and that is “eat sharks and be the top scorer of your friend list”. As it is an endless game, you can play it without paying anything and there is no energy system. But still, you should know about the Hungry Shark Evolution cheats, tips, and tricks.

First of all, let’s talk about the basics of the game, in-game currency, your enemies, sharks, special sharks, and hidden items. In the game, you have to navigate your shark towards other sharks to eat them and avoid dangerous sharks and weapons inside the ocean. Your shark eats other sharks automatically when you bring it close. The challenge is you have to eat fish/sharks/swimmers continuously in order to avoid starvation. Also, see – Best Pokemon games for Android 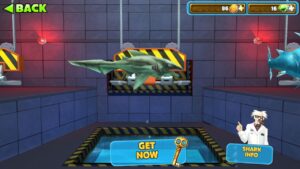 Among all these sharks, you can easily acquire or evolve to Reef shark and to unlock all sharks in Hungry Shark Evolution game, you need thousands of coins. But you can easily get a strong shark, read the cheats below 🙂

Under the ocean, there are lots of hidden treasures and dangers. Let’s talk about all kinds of creatures in the Hungry Shark Evolution Game: –

Among all these, the creatures and device with extreme danger level can easily slay down your shark. You have to avoid all of them in order to continue living life. 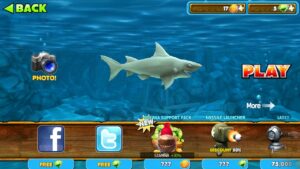 In this Hungry Shark Evolution cheat, we will talk about the ways to acquire free coins and gems. These cheats are: –

In this Hungry Shark Evolution cheat, we will talk about this free shark. You can get it by downloading “trials frontier” game. As mentioned above, when you tap on the play button, the game shows the list of items you can purchase before playing, scroll right and find this “Trails Baby”, tap on “play trials frontier” option and download it. That’s it! You got a free shark!

Hungry Shark Evolution Cheats -> Unlock Special Sharks -> You can unlock special sharks in exchange for gems. And gem is one of the valuable and rare items. So the best way to get them for free is score “7,50,000” points. Simply play the game, don’t die and reach this milestone. It’ easy if you want it free. 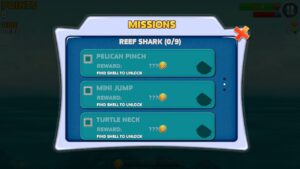