King, the creators of popular Candy Crush game, has recently released a brand new strategy game “Legend of Solgard” for mobile devices, featuring lots of game modes such as PvP Arena, Campaign, Boss, Bounty, and much more. Additionally, there is a wide range of creatures is also available.

Unlike other strategy games, this one combines the match-3 and puzzle RPG gameplay with character collection & special abilities mechanics. You start the game from campaign mode and as you clear the levels, new game modes such as PvP, Bounty etc. gets unlocked. And leveling up also unlocks new characters, special abilities, unique skills, powers, and much more.

If you are having trouble completing the levels or those bad guys are destroying your portal, then we are here to help you with our top tips, cheats & strategy guide. In this post, we have covered everything about the game you need to know:-

In the Legend Of Solgard game, your main objective is to destroy the enemy’s portal as soon as possible. But only in the normal battles. For instance, after a certain level, you will have to defeat the boss to unlock next levels. And in the boss battle, there would not be any portal. And your objective would be defeating the boss as soon as possible.

That’s the main thing you have to keep in mind. In the normal matches, your objective should be destroying the enemy’s base as soon as possible. Don’t focus on killing enemies in these battles; they will come over and over again and the battle will never end.

And In the boss battles, as stated above, there would not be any portal. So kill the boss as soon as possible. Similarly, in the harvesting mode/treasure, harvest the sun gems as many as possible.

The only way to attack enemies in the battle is by matching the same type of creatures in a straight lane, L shape, T-shape, Square. If you match side-by-side, then it will create a shield that will save you from the enemies.

In this part, let’s learn some Legend of Solgard tips, cheats to win battles: –

After checking the base’s HP, check the enemy’s HP/Damage-Power. If it’s not showing, then it means, it’s 1. By default, when you start the battle, all of your creatures will have 1 damage power. Take a look at the below picture: – 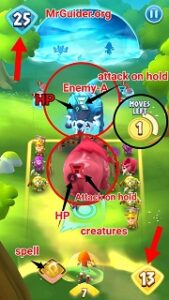 As you can see in above picture, enemy-A has 9 Power. It means, the enemy can deal 9 damage to our creatures.  And our creature(Roughpaw) has 4 power. But rest of our creatures(in the picture above) is not showing HP. It means they have only 1 HP/power.

You can increase their HP by matching or merging or combining.

So, in this way, you can analyze the board; the enemy’s HP and creatures’ HP. Now, let’s learn how attacking works.

Upon your turn, you will get three moves(you can check the number of moves on the right side). You can move the creatures to another lane and match to merge.

To make the creatures attackable, merge the creatures. For instance, merge three Roughpaws(same column/lane and straight) or create a square(just like you do in Candy Crush like games).

When you match or merge more than 3-creatures(same type), a new big creature gets formed and after three moves, it will attack the enemy.

Well, it’s an important step because when you are battling against the boss and the boss is in the left side and you merged the creatures at the right side, then there would not be any loss to the enemy team. So, try to merge or match wisely.

In Legend of Solgard game, creatures, as well as enemies, attack after a certain amount of turns. As you can see in above picture, enemy-A will hold attack until 3-turns get passed. And your creature will attack after one turn[Check the hold icon].

By analyzing the enemy’s lane, HP, attack time(hold), you can plan the strategy.

#3.) Make the creatures stronger by merging

In the battle, a strong creature can deal massive/critical-damage to the enemies. And to make it strong, move similar type of creatures in the same lane – merge. The more creatures you merge, the more powerful will be your creature.

Upon your turn, you have only three moves and you should use these moves wisely. Any mistake will put you out of the battle. A move deducts: –

It would be better if you create a shield(match the creatures side-by-side – horizontally) if the enemy is going to attack after the current turn. Or just keep calm if your creature has more HP than the enemy and it’s going to attack.

#5.) Take your time and play wisely

Don’t play blindly. Take your time and check all the possible moves and go for the best one. And it would be better if you form a big creature by merging 4 duplicate creatures(square). Or at least create the shield or attackable creature.

Go to the main screen -> tap the collection tab -> then tap the creature -> after it, tap the ability icon at the top-right side of the screen.

#7.) Upgrade and Rank-Up the creatures

To make the creatures stronger, upgrade them and increase their rank. To level-up or upgrade the creature’s attributes or skills, you need sun gems. You can gather the sun gems by playing the game. Before you start the battle, you can check the reward – the number of sun gems. Once you have enough, go to the collection tab -> head to the character’s profile and then tap one of the skill icons and apply. Unlock or upgrade all the skills and then you will be able to increase its rank. Ranking up the creature will increase the level cap and you will be able to upgrade it more. Also, see – Best war games on Android

In Legend of Solgard game, sun gem is one of the rare in-game items. It is used to upgrade the creatures. And without upgrading the creature, you can not unlock their special ability. So, it would be better if you play treasure caves mode and harvest sun gems. On the main screen, tap the play button. After it, tap the arrow icon at the bottom-left corner and switch to that mode.

#9.) Claim the wooden chest after every four hours

Go to the shop tab and at the top, you will see a free chest section. The player can claim a wooden chest after every four hours. It includes character’s fragments, coins, sun gems, and many more items.

#10.) Get the golden chest by completing all the daily tasks

Each day, you get some specific missions in Legend of Solgard game. Complete all these daily tasks to grab the golden chest that includes premium & precious items. You can check the quest by tapping the chest icon(at the top-right corner).

And get your first legendary chest after you complete the 40 levels.