Mad Rocket: Fog of War has finally released for Android and iOS by FTT, the publisher behind Boxing Star, Ghostbusters World, DC Unchained, and many more brilliant games. If you have very played base building games such as Clash of Clans, Craft Warriors, then you would not face any problem in understanding the game’s mechanics. In case, you are playing this type of game for the first time or you are having the trouble in building the best base layout according to the HQ level, then our Mad Rocket: Fog of War guide and Mad Rocket: Fog of War tips, cheats & strategies will help you in defeating the rivals in attacks as well as defense. Let’s get started.

Before we head to the main guide, tips, cheats & strategies part, let’s learn the basics first. In Mad Rocket: Fog of War game, the player’s objective is to build a strong base. All the players raid each other base for the resources; gold, eternium, cube. Because these resources are needed to upgrade the buildings, arms(units or characters or missiles), in searching enemy base, building, expanding the base, and more tasks. Without these resources, you can not progress. Since production buildings such as Eternium Drill, Residence, Cube Factory takes hours of time in producing the resources, looting other player’s base is the only way to progress fast.

Similarly, enemies can raid your base anytime and loot the gold, eternium. And it also reduces the trophies. And here comes the defense part. You can not directly gift the resources to enemies. You have many defense types facilities; to strike down the ground/air units. But that’s not enough; your main job starts here; you have to place the defense weapons or facilities wisely(on your base, by covering all the resources) in order to defeat the intruder.

The main building at your base is HQ. Upgrading it unlocks new buildings, arms(weapons, units or characters), and support type facilities. And depending on the HQ’s level, you will have to modify the layout of base(to place new/unlocked buildings wisely).

THE FOG BATTLE WOULDN’T BE EASY

Unlike Clash of Clans game, In Mad Rocket: Fog of War, you can not see the enemy’s base’s buildings/facilities/defense. To uncover or clear the fog, you send the units or attack with missiles. To win the battle, you need at least 1*. Defeat will reduce the trophies. Victory will push you upward in the league. Destroying the HQ clears all the fog and also reward you 1*. But it would be surrounded by laser turret, Gatling tower, and many more defense facilities. The player is advised to deploy the units wisely and use the BP efficiently.

BP And Units: To deploy the units, you need battle points(BP). BP re-generates over time(1 BP in 0.8 second). You can check the BP requirements at the top-left corner of units’ icons.

As you hit the attack button, your time starts. You have to grab at least 1-star in the given time in order to win the battle. Note: Time extends as you destroy the buildings.

The rule of thumb is: Don’t care about the trophies! Go for the loot/resources; gold, eternium. And upgrade the defense buildings+storage facilities(to store more resources) first, then go for the armory upgrades, and then production buildings. Upgrading the buildings, units, constructing the buildings rewards you commander XP. As you gain more, commander level will increase.

It is one of the main requirements for HQ upgrade.

BASE LAYOUT IS EVERYTHING WHEN IT COMES TO DEFENSE

As you progress through the game or upgrade the HQ, you will need to expand the base by removing the walls, to place the newly unlocked buildings. So each time you upgrade, you will need to customize the base’s layout.

In Mad Rocket: Fog of War, the gem is one of the premium-in game items. You can not produce it like gold, gas, eternium. We have mentioned all the gem earning tips in the tips part below.

Cube is not unlocked by default. It unlocks at HQ level 11. Eternium is used in building, upgrading the various types of facilities on your base. Gold is used in upgrading the arms(missiles, weapons, units, characters) in the armory, in searching base, and more tasks. As you progress in Mad Rocket: Fog of War, you will need a huge amount of resources. Additionally, upgrading will also take more time.

When your base has an active shield, other players will not be able to take revenge or attack your base. On the main screen of Mad Rocket: Fog of War, on the top-right side, you can check the shield duration. You can buy this item in the shop in exchange for red gems.

You can set multiple upgrades or building constructions if you have more than one builder. You can buy the builder office in the shop to hire a new builder. The player can buy up to five builders. So don’t waste gems in instant upgrades, useless tasks. Save them for builder’s office. The reason is as you buy more, the price of the builder’s office will increase.

In case you don’t know, you can customize the base’s layout in the editing menu. On the bottom-right side of the screen, tap the edit base button. On the left side, there are two options for bulk action: store all buildings and restore all tiles. Tap the store button if you want to customize from start. Or for minor actions, tap the building and hit store button. This will move the building in the inventory. To drag from inventory, hold down the building and drag to the desired place. 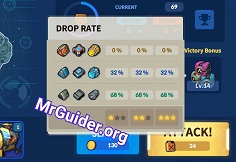 As you move higher in the league or win matches, victory bonus chest’s level will rise up and you will obtain high-quality(2*-3*) parts as a reward.

Vault is one of the main facilities in Mad Rocket: Fog of War game. Why? Because it protects certain % of resources from being plundered by the enemies. Enemies can not steal the resources(Eternium, Gold) from the vault.

Time-Compressor produces an item named timer. You can use this item to reduce the construction or upgrading time of buildings. To use it, tap the building(in-construction or in development) -> reduce.

If you have ever played PUBG Mobile or know about its ROYALE PASS system, then it would be easy for you to understand how it works.

You earn points(mission points) by playing the game. As you gain more, you will get rewards(tap the badge icon at the top-left of the game’s screen). By default, you get fewer rewards as there is only one way to earn points -> win the battle.

You can upgrade it to season pass by paying real money and get additional rewards by collecting the mission points. When you upgrade it to the season pass, you can earn points by following four ways: –

The season pass lasts long for certain days. Within this duration, you will earn juicy rewards; timers, gems, parts, chests upon collecting the points.

1.) Attack Your Own Base And Try To Win

If you are unsure whether the base layout is good for defense or not, then it would be better to attack your own base. In the editing menu of the game, on the left side, there is an option named test battle. Tap it and attack your own base. It would not cost any resources. Since you already know where is the HQ, defense facilities, try to destroy them asap and figure out how well your defense works upon using various strategies on your own base. If you failed, then leave it. If you get successful, then analyze where is the mistake.

2.) Spend, Before You Lose When There Is No One

Usually, most of the players attack the base with the most loot. If you don’t want to be attacked, then spend all the resources in upgrading, building before you leave the game. Fewer resources mean fewer attacks.

3.) Don’t Let The Thieves Steal All The Resources

Pay attention to the vault facility at your base. It protects the resources from the enemies. Make sure to upgrade it to protect more resources. Enemies would not be able to loot the resources stored in the vault.

4.) Take Wise Decisions In The Battle

Since time is limited, you will have to take the decisions fast and wisely. First, where to attack? Pick any unit with the few BP(for example; single missile) to clear the fog(at least you will be able to know either there is a laser turret near or Gatling tower nearby). Laser turret’s attack speed is very fast and the damage power is also good. But it would not deal damage to the ground units.

But Gatling tower can attack both types of units. You can try out the Fighter Plane to get rid of these defense weapons. Air Guardian is good against laser turret.

As you upgrade HQ, you will unlock powerful units such as Laser Girl, Mothership, Dreadnought, and many powerful missiles.

We would recommend you to build the balance team in Mad Rocket: Fog of War game; include missiles, high health units, high damage units, on the basis of attack range, speed. You can get all the units details; attack speed, damage, health, range, BP, cool down, shots, and more in the armory.

After making some changes, go for the test attack.

5.) Figure Out The Loophole By Watching Replay

MISTAKE! No one can tell you better than an enemy. On the main screen of the game, on the left side, tap the side menu button and head to the battle logs. There you can see the defense as well as attack log. Replay the match video in which you have got defeat to know where is the mistake. Make changes in the base layout to avoid getting more defeats.

You can get free gems by claiming the victory bonus. To get this bonus, you will have to win at least five matches daily. You can claim the reward in the battle menu. Tap the battle button -> below the find match button, you can see the progress. Once done, claim the reward.

7.) Join A Clan And Get Rewarded

After building the clanhouse building at your base, you will be able to join a clan. Join any active clan and earn stars by winning the battles. This contribution will fill up the daily mission and weekly mission meter. Fill it asap to earn parts, gems for free.