Boxing Star is a brand new boxing game for Android and iOS by FTT. Check out our Boxing Star guide and learn about gears, skill, fight, and much more

Boxing Star is the latest mobile boxing game from the creators of DC Unchained game. FTT/FourThirtyThree Inc. recently published this game on mobile app stores and it challenges you to K.O. the other players across the world and top the leaderboard. Boxing Star game features lots of game modes such as league matches, story-mode, photo match, and more. In this post, we have covered everything about the game you need to know: Boxing Star Guide for the beginners; gear, skill, fight, controls, and much more. We have divided this post into two parts; how to play & beginner’s guide. The How To Play part covers fighting, controlling, and more. And the beginner’s guide covers skill, upgrading, gears, S-Coins, training, and much more. Make sure to read both.

Boxing Star Guide To The Basics – How To Play⇓

Boxing Star game features simple & handy controls(beginner’s friendly). If you perfectly time the punches, hook, upper-cut, and dodge moves, you can even defeat the players having more HP than yours. The very first step you have to do is selecting a game mode; on the main screen, tap the story mode or league mode to start the match. In the story mode, you compete against a specific character, and upon victory, you can claim free rewards such as gears(gloves, protection), coins, parts, and much more.

There’s also another mode available; photo match. At the top-right corner, tap the N/menu button -> social – photo match -> load the photo -> play the match for fun. For the first time, share the result on FB to get free gold as a reward.

So, this is a short basic Boxing Star guide for beginners. Now, let’s learn some more about the game in Boxing Star’s ultimate guide.

In the Boxing Star game, equipping the skill activates buffs/bonus advantage in the fight. For instance: – Thron Fist is a skill and upon activation, the character will punch the enemy’s face.

How to equip the skills?

At the top-right corner, tap the menu button and head to the skill menu. On the next screen, tap the skill set button. There you can see the list of skills; Jab, Hook, Uppercut, Stance, and Special. Tap on a skill icon and hit the equip button.

How to activate skills in the fight.

Tap the skill icon and you can check the chances of activation. For instance; if you have equipped Jab skill, then hit the enemy with Jab moves and the skill will get activated(based on the chances %).

How to upgrade the skills?

In the Boxing Star game, you can increase the chances of skill activation, its performance by upgrading the skill. It costs you skill points. Go to the skill menu -> tap the training button and start it. After a certain amount of time, you will get skill points.

You can spend these skill points on upgrading. Tap the skill icon -> then tap the + icon next to an attribute -> confirm by tapping the spend button.

You can equip a certain number of skills at a time. Unlock new slots to equip more.

The stats and skill of the gear(gloves) matter a lot. At the beginning of the game, you have low-quality gears (Common) and with this gear set, you would not be able to strike down the enemies in the league matches or as you progress in story mode, battles will be hard. So it’s important to enhance the gear to increase the character’s performance in the match. We have shared a number of gear tips here to get rare, epic gear in Boxing Star. Go to the menu -> gear -> manage. Tap a gear you want to equip and hit the equip button & choose a slot. We would recommend you to focus on the high-rank gears once acquired. The reason is we have to upgrade the low-rank gears a lot in order to move on. But not in the case of high-rank gears.

How to obtain gears; protective or gloves?

How to upgrade gears?

Go to the gear menu screen -> tap an equipped item you want to upgrade -> hit the upgrade button -> on the next screen, you have to select the material gloves/protective-items. Make sure to select only low-quality items as a material because, after upgrading, selected items will be removed.

So, in this way you can upgrade the level of gears in the Boxing Star game. You can also equip sponsor items and activate a passive skill. Go to the menu -> gears -> sponsor -> equip. If it’s locked, then you need to unlock it -> play the game & complete the quests.

How To Grade Up Gears?

In the above paragraph, we explained to you how to upgrade gears. But what to do when the gear reaches its maximum level? It’s quite simple. Increase its grade. Grading up the gear enhances its stats by a massive boost. How to grade up? First, reach the maximum level. Once reached, use gear parts to increase the gear’s grade. Read the part tips here to know how to acquire parts in Boxing Star.

S-coins can be obtained by completing the achievements, promotional matches. You can spend these coins on buying cars, places, and in hiring entourage. Go to the menu -> personal management -> tap the swank button. Buying these luxury items will provide you buff, bonus, and wheels. There are three sections in this menu -> crib, wheels, and entourage.

The match protection feature prevents other players from attacking your character when you go offline. It gets turned on when you get defeats in the defense matches(when you log off). On the other hand, if you get wins, you will get the defense reward. Go to the home screen -> additional match -> defense record -> there you can check log. Keep in mind that this protection would not work in group matches.

How To Stun Opponents And How You Get Shocked? 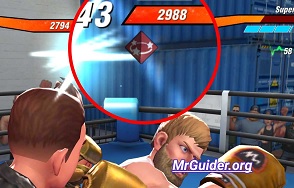 Just below the edge of the HP bar, you will see an icon; below your HP bar, it’s shock and below the enemy’s HP bar, it’s stun. When you see this icon just below the enemy’s HP bar, then hit him as much as you can. This will activate the stun effect; the enemy would not be able to attack you. Grab this opportunity and deal massive damage. If you see this icon below your HP bar, then dodge as many attacks as you can.

You can play the group matches three times a day and earn loads of stars to rank up in the league. The group match feature unlocks once you reach league 3 by earning stars(800+).

If the enemy is playing with a mega glove, then you may get a powerful hit in the battle which will reduce the character’s HP by a massive amount. To dodge the special attack, you have to dodge or evade in a certain direction; left or right. Before you start the fight, tap the enemy’s icon at the bottom-right corner -> then long-press the mega gear -> it will show you the accurate evade direction.

How To Get Sponsorship?

You can obtain the sponsorship item by completing the requirements. These items grant special passive skill to the character in the battles. Go to the gear section -> sponsor -> select a brand -> collection list -> collect all the gears featured there to unlock that sponsor item. You get gears from the premium packs, league packs, clan donation reward, ranking reward.

How To Change Character Or Body Type?

Boxing Star game features six characters; Jin, Jacob, Diego, Koji, Tomas, Titus. Three out of six are unlocked by default. All these characters have different stats; power, speed, and stamina. Go to the menu -> management -> appearance -> under face & body section, tap the character -> go-to body type tab -> there you can change the character.

How To Hire Staff In Boxing Star Game?

Once you cross league 3 in Boxing Star, a new feature “Staff” will get unlocked. Here you can hire the staff members who provide passive buffs to the character. They are extremely important. All the staff members provide different buff. For example; Hiring Aken increases the chances of obtaining the hyper boost in offline matches, during the break. Go to the management menu -> staff -> hire the staff member. At the top-left corner, you can track commission points. You receive these points when you hire a staff member. When the gauge fills up to the maximum point, a full contract will be made. You can hire staff using gold, coins, and by watching the video ads.

So, this is the Boxing Star guide for beginners. Download Boxing Star game for Android – Here(Google Play Store).