Fate/Grand Order is a popular RPG for mobile devices by Aniplex. Check out our Fate Grand Order guide, tips, cheats & strategy to master the game

Fate Grand Order, one of the best role-playing games for Android, available on Google Play Store. The game features an amazing story-line, card-battle gameplay, and many challenging levels that make the game addictive & worth playing. The reward system of this game is also pretty good; you get free goodies daily by completing the missions or events. If you have just started it and you are having trouble understanding the Fate Grand Order game’s mechanics, then this guide is for you. In this post, we have covered everything about the game you need to know: Fate Grand Order guide and Fate Grand Order tips, cheats & strategy guide.

Let’s learn the basics first before diving into the cheats, tips & strategy guide part below. In Fate Grand Order game, your main objective is to build the strong party of servants/heroic-spirits. It starts with a tutorial in which you learn the basics of the game; how to attack enemies, manage formation, supporters, servants, and cards. Once you finish the tutorial, the real game starts! Let’s learn the basic mechanics: –

Fate Grand Order game features a card-battle system; all you need to do is pick the servants, craft essence or supporter before starting the battle and then, in the battle, choose cards to attack enemies. All the servants or craft essence have unique skills & different stats; ATK, DEF, CHR, and HP. As you progress, the difficulty level will increase. And in those hard levels, the player has to use the servant’s skills or cards efficiently. After finishing the quest in any area, the game will reward you a number of items; material for Ascension, Saint Quartz, Gem, skill material, EXP boosters, and much more.

In this part, we will learn about Craft Essence, Servants, Summoning, Enhancing, Bond Level, and much more. Make sure to pay attention to all the parts to master the game.

For the battle, you can choose up to five Servants and one support(borrow) servant(before starting the battle). First of all, let’s learn about the cost of Servants: –

Tap the menu -> formation -> party setup -> here you can select the Servants and Craft Essence. On the same screen(party setup), on the bottom-right side, take a look at the total cost. Now, tap on an empty or character slot, on the next screen, on the servants’ portrait, take a look at the cost. For example; the total cost is 30. You can not exceed this cost or add more characters once you consume this threshold. Let’s learn how to get more Servants in Fate Grand Order!

Time Limited -> In this event, the drop rate of high-quality Servants(SSR-Rank, 5*) goes up.

Saint Quartz is an item that is used to summon Servants or Craft Essence. You can acquire this item through time-limited quests or normal quests. [Path; menu -> summon -> swipe to switch to different summons).

Friendship Points – How To Earn?

As you know, before the battle, we can borrow a servant from other players (support). Whenever you choose, you earn these points. You can also let other players choose your servant; menu -> formation -> support setup -> select the spirits/servants. When other players/masters use your servant as support, you get friend points. Use these points to summon craft essence or more servants.

You can obtain this item through summoning. What’s the benefit? How to use or equip craft essence? It increases the stats of servants(HP, NP, ATK) or provides the special buff. But only when you equip with the servants. Here’s how: – 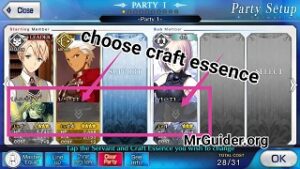 As mentioned above, as you progress in Fate Grand Order, things will be different as compared to the beginning time. The difficulty level goes up as you progress and enhancing is the only way to power up servants, their skills, abilities, craft essence, and stats. Let’s learn about all(go to menu -> enhance): –

In the enhance menu, tap the servent option. On the left side, tap the + icon and select the character to increase its level. Once selected, on the right side, tap the + icon and choose the material that you want to use to upgrade the selected servant. Tip – Don’t use 3* or high-rank characters for leveling up. If possible, select low-quality spirits or EXP material/card(you get this item upon summoning or completing the quests). After selecting the material, tap the OK button and proceed. Hit the enhance button to confirm. Note: – Characters or items selected as the material will be removed.

All the servants featured in Fate Grand Order game have unique skills and you can use these skills in the battle to activate buffs or advantages. To get more benefit, you need to increase the skill level. Go to enhance menu -> choose skill -> select the servant -> enhance. You can obtain skill enhancement material from the quests. Upgrading the skill level also reduces the cooldown time.

Limit Break: – To limit break the craft essence, select the duplicate or identical craft essence as a material. If you have not, then go for summoning. The limit break also adds one more star to that essence.

You can unlock new skills or cards of the servant by servant evolution; Ascension. Go to the enhance menu screen -> choose ascension -> select the servant -> enhance. It requires ascension material(obtain it from the quests, events).

In the battle, a character becomes eligible to cast its special skill once the NP gauge reaches its maximum point. Noble Phantasm Enhancement increases the servant’s NP’s strength.

This enhancement feature allows the player to increase the level cap of servants.

Servant earns bond points after getting the victory in the battle. After gaining enough, their bond level will increase. Depending on the servant rank(1*, 2*, 3*, 4*, 5*), you will get rewards such as Saint Quartz, golden apple (after bond level 5). Go to the profile page(long press the icon) of servants to check their bond level.

You can sell cards such as EXP card, craft essence, servants and earn mana prism. Tap the menu -> shop -> burning(Sell) -> select the items to sell and tap OK button.

Mana Prism points can be earned by burning or selling items in the shop. You can exchange these points for precious items such as 5* craft essence, summon ticket, EXP card, and more. Menu ->shop -> exchange mana prism.

You can exchange this item in the shop -> special summon. How to get? Fate Grand Order game grants you this item when you receive an identical 5* servant(if you have already received it 5 times).

#1.) Complete The Quests, Get Fragments And Spend

On the main screen, at the bottom, near the present box, tap the quest icon. Complete these quests to earn Saint Quarts Fragments. You can spend these fragments in the trade shop to get Saint Quartz. Complete daily quests to earn EXP cards, materials, and QP. Pay attention to the rank-up quest to increase servant’s skill or NP. 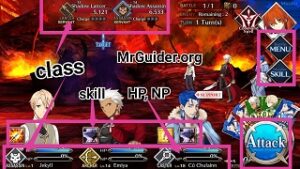 In the battle, at the top, you can check the classes of enemies and at the bottom, of the servants. Attack with a strong class character against weak class(for example; saber against lancer) to deal more damage; select effective cards and target weak enemy(tap to target).

In the battle, before choosing the cards, you can use the servant’s skills. Just tap the skill icon, just above the HP gauge. And pay attention to the NP bar, when its gauge reaches the maximum point, you can cast special skill.

If you want to earn more friendship points, then don’t forget to set up the supporter party. Go to the menu, head to the formation -> support set up -> select the servants. Also, see – Best strategy games for Android

#6.) Make Use Of Useless Servants

Fate Grand Order game features hundreds of characters. Make sure to focus on only best 4-5 characters. Don’t waste QP or material in enhancing all the servants you have. And don’t use 3* or high-rank servants as a material. Use 1* or 2* servants to enhance high-rank characters.