These are the best characters in the game: –

Langris is the latest 5-NAT in Black Clover Phantom Knights. He was added in the February 19, 2020 update. He excels in area attacks – his A.A. skill inflicts 3XL damage to the random enemies in range. It’s better to improve his CRIT rate with relics so that you can get the max out of his abilities.

Charmy (Dwarf) is another top-tier character with buff and debuff skills. She was added in the February 26, 2020 update. During the 26th Feb to 4th March event, Dwarf Charmy drop rates will be high(Phantom Festival Banner). The update has also added one more way to power up the characters in Black Clover Phantom Knights; awaken the stats with awakening crystals.

Devil is a god-tier character, now available in Black Clover Phantom Knights Global. He was added to the summoning banner on February 10, 2020. On the JP Tier List, Devil holds the top-rank. He is too good in the PvP Arena Battles. Let’s take a look at his stats: – 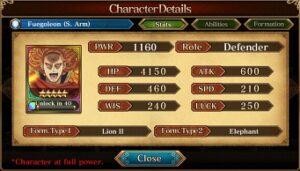 Fuegoleon(S. Arm) is the latest character added to the Black Clover Phantom Knights global version. He is an amazing tank – probably the best one – with high HP and DEF stats that let him soak more damage while fighting from the front line. Also, he possesses some great abilities that increase his armor, attack, critical rate, and gem drop rate for allies. We have covered this character in the latest update guide that you can check here –

Mereoleona is one of the best attackers in the game with amazing power, attack stats, and abilities. His Arcane Art skill inflicts AoE damage on the enemies. A.O.M. skill consumes AA gauge and boosts AOM Participant’s Gauges.

Other skills include hitting the enemy multiple times, raising ATK/CRIT of self and allies in the backline, raising own Hate/DEF, low chance to counter.

If you don’t know about the abilities and other stuff, check out this post: –

This masked guy is also an amazing character with damage abilities: –

Black Asta is one of the featured heroes in JP Black Clover Phantom Knights Tier List. He has decent HP and ATK stats with powerful abilities to knockdown enemies: –

One of the best healers in the game. You should get her at the start of the game using rerolling. We have discussed her skill in this post: –

Henry’s HP stats are impressive, which let him absorb more damage in the front-line as a defender. He is one of the best defenders in the game.

She is another great healer: –

Witch Queen has CC abilities that may help you in the battle: –

These are the best characters available in Black Clover Phantom Knights. Tier 1 Characters! Let’s have a look at tier 2 characters.

Update – Finral has been added in Black Clover Phantom Knights Global Version on February 19, 2020 update. His AA moves enemies in range to open space in the front row and lowers the ATK/SPD with formation match. AB I of Finral raises an ally’s CRIT rate and SPD. AB II is the same as AA. And, AB III gives 2 actions and damage immunity to an ally. It’s better to equip the relic that triggers toughening abilities so that Finral can give other allies more actions.

Updated – Licht is the new character that we have added in tier 2. He does good damage and can increase the blue gem drop rate. Although, there are better attackers in the game with better stats and abilities – like Black Asta

You can check the skills and other info of all these characters in our latest post on Black Clover Phantom Knights: –

*Noelle(Valentine’s) is the new hero in Black Clover Phantom Knights(available in Feb. event). She possesses amazing abilities that increase her survivability – also, has some support skills that help allies during the battle. For example – self-healing, increases DEF of an ally, gives armor to allies, etc. You can get more details of her in the locked tab of the Brigade menu or check out this post –

Julius and Jien are two new characters in the game. You can get their info in this post: –

Vanessa is the new hero/character in Black Clover Phantom Knights. Unfortunately, she is not good. You can get her info in the Brigade menu or check out this update –

In this Black Clover Phantom Knights Tier List, Tier 1 characters are the best characters and as we go down further, you have good characters in Tier 2, the average characters in tier 3. Tier 1> Tier 2>3>4>5>6>7. A Healer is a must-have character because you will need her skills to heal allies during the fight – in high-difficulty quests.

You may find these posts useful: –

This article was last updated on February 26, 2020. Updated – Charmy Dwarf added to tier 1. Finral & Langris have been added to tier 2 and tier 1 respectively. Devil and Licht are the two new characters in the global version. Devil(God Tier, Tier 1). Licht(Tier 2). Added Vanessa(Valentine’s), Noella(Valentine’s) to tier 7, 2 respectively.  Update – Added Fuegoleon Salamander to Tier 1. Update – Added Julius and Jien to Tier 3. The iOS version of the game has just been released.